While some may balk at the deconstructed graphical approach, those who dig deep into this dungeon will be rewarded with a game that is simple, yet incredibly complex.

During its Tokyo Game Show showcase just a few weeks ago, Square Enix announced Dungeon Encounters. The game is directed by Final Fantasy IX director and creator of the series’ Active Time Battle system Hiroyuki Ito and produced by Final Fantasy XII: The Zodiac Age producer Hiroaki Kato, with character designs from Ryoma Ito and a soundtrack overseen by Nobuo Uematsu. It was released worldwide on PC (via Steam), PlayStation 4, and Nintendo Switch on October 14, 2021.

Dungeon Encounters is a single-player strategic dungeon-exploration RPG. It tasks players with venturing through 2D grid-based levels, overcoming obstacles and battles as they try to reach the bottom floor. The game is lean and mean from the very beginning — including the title. Upon loading, gamers may notice the distinct lack of opening movie, background music, or much of anything other than a simple title screen. This is the first indication of what to expect, and from there the game does not become any more generous. Starting a new game reveals a short block of text, which serves as the bulk of the main storyline: a monstrous labyrinth has appeared, and your league of heroes has assembled to discover the secrets of this deep dungeon.

Players are dropped into the game and told to select four characters. There are no job classes, cutscenes, or characterization of the party members, save for a few lines of text providing some background. Once assembled, the party is left to explore “Floor 00”, essentially a town sitting at the mouth of the dungeon. On this floor, players can visit shops to purchase weapons, armor, and abilities, and heal before descending into the horrors waiting below.

Each floor is a series of empty square-based grids that fill in as the player crosses. Every interaction is represented by a number or letter, each colored black or white. Coming across white sequences will trigger an event or ability, produce treasure, or heal the party. Meanwhile, black numbers represent enemy encounters, with players whisked away to battle. Each floor encountered maintains the incredibly dialed-down design, tracking completion of each map as players cycle back and forth through each floor in an attempt to fill in every square. There is certainly something intrinsically rewarding about completing each level; more importantly, completing each map yields additional ability points. 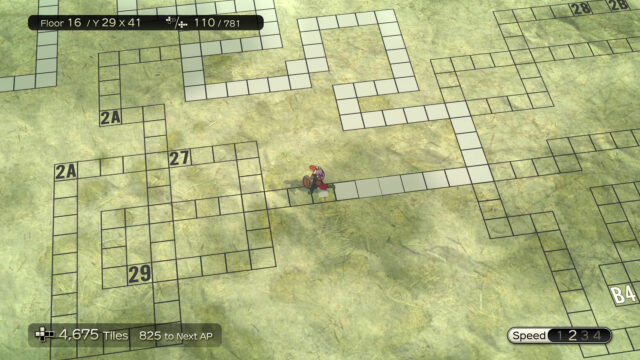 The game looks like a New York Times crossword puzzle

As the party amasses useful abilities through exploration, ability points are used to toggle them on or off. Additional AP are awarded when reaching particular coverage milestones. As the game does not feature traditional items or healing spells, players can unlock healing abilities to use in battle, but only if there are enough AP within the party to active them. This mechanic prioritizes map completion, as it is imperative to have enough AP to ensure players are able to utilize the healing, scouting, or buff abilities as needed. Other useful skills, including the ability to travel up or down a floor without reaching the designated exit, must be discovered in-game and then toggled on to use. While many abilities are limited to a specific number of uses, most floors have locations which restore these to full capacity.

There are no true random battles in Dungeon Encounters, as players are able to avoid encounters at will. Paths may be blocked by these battle events, but ascending and descending relocates the positioning of each floor’s numbers. Even party management is distilled, with party members having statistics for Defense and Evasion, with attack power determined by the strength of the weapon or item equipped. Each unit can equip two weapons, two pieces of armor, and an accessory. Each piece of equipment has a cost of Proficiency Points, serving as a weight limit of sorts for each character. In this sense, each character is fully customizable as none are predisposed to particular skills or abilities. The weapons equipped determine the play style for each character, as well as inform the type, range, and number of enemies affected.

The game features the Active Turn Battle system with minimalist tweaks, as there are no elemental weaknesses, item management, or magic points to worry about. Each player or enemy unit is represented by a picture with a meter which must fill to trigger a turn. Each unit has a separate Physical and Magical Defense number, which must be whittled down before attacks deplete the unit’s HP. During a turn, each unit is able to launch an attack using an equipped weapon or deploy one of the party’s abilities. 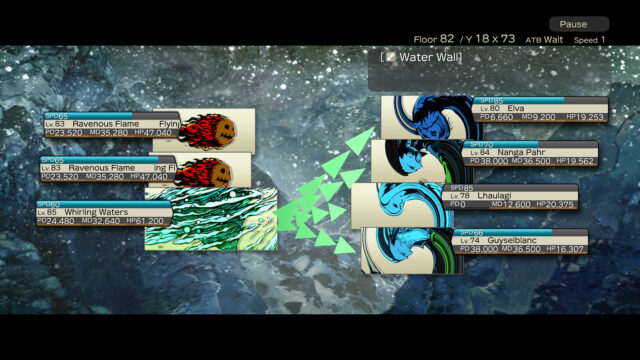 Simple yet beautiful graphical presentation with sparse but exciting music.

As with nearly every system in this game, what appears simple (or perhaps even cheap) is deceptively, almost maddeningly, layered and complex. Battles on early floors are simple but very quickly give way to intense encounters against enemies equipped with AOE attacks. In unluckier circumstances, players may be inflicted with a status ailment or turned to stone, requiring an often difficult voyage to a specific square to be healed. While earlier encounters may not require extensive strategy, the game quickly informs players their time is well spent with strategic contemplation. Even as the damage counters hit the tens of thousands, the battle system is intense and deeply balanced, even if a false move or two can hastily bring disaster upon a well-equipped party.

The presentation is simplistic and effective, but may not be for everyone. The character and enemy portraits are varied and well-drawn, but almost entirely static. Battles feature very limited attack animations and sound effects, which underscores the importance of focus in battles but may also underwhelm. Even the soundtrack is pared down, with next to no music featuring while exploring. The soundtrack primarily plays during battle, featuring dynamic electronic guitar arrangements.

Despite the minimalist graphical approach, there is a dizzying satisfaction to completing a floor, especially if it requires bouncing between other floors to land in an otherwise inaccessible spot. Not only are the additional Ability Points worth the trek, but players can encounter puzzles or other unlockable party members in these spaces. This exploration is complemented by the addition of puzzles, which are distilled into word or math riddles or even maps showing where rare rewards or characters are located. 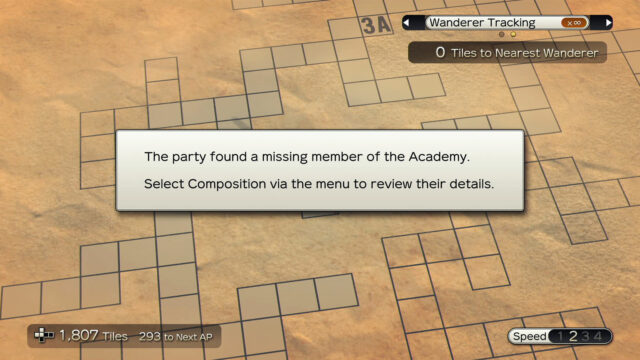 Feels like an homage to both vintage RPGs and board game/table-top RPGs.

I’ve only scratched the surface of this complex dungeon-crawler, with about 15 hours of playtime and having reached the 25th floor. However, my time with the game has been immensely satisfying. I’ve frequently found myself with clenched palms at the end of a tense battle, which is a testament to the strength of the gameplay systems when considering the lack of anything else. It is thrilling to dig a bit too far into the dungeon and reaching a floor with high-powered enemies and equipment. The momentum of battle can quickly change when a much more powerful weapon or shield is located.

I was not sure what to expect from this game, as the trailer provided by Square Enix seemed reminiscent of Unlimited SaGa, with a board game-like map as well as SaGa Scarlet Grace, with its pared-down gameplay mechanics. However, I found the game to be decidedly more accessible, even if some of the gameplay mechanics are hidden deep within. Dungeon Encounters feels like an homage to both vintage Final Fantasy as well as board games or tabletop RPGs. There is something poetic about a company known for visual spectacle practically stealth-releasing this back-to-basics dungeon-crawler produced by a team of venerable names in the industry. While some may balk at the deconstructed graphical approach, those who dig deep into this dungeon will be rewarded with a game that is simple, yet incredibly complex.