In this edition of the column, we go deep underground to discover a lost civilization in Modern Storyteller’s The Forgotten City.

In the ten years since its 2011 release, The Elder Scrolls V: Skyrim has carved out quite a storied legacy for itself. Constant rereleases and ports are only the beginning; an active modding community has also done its part to ensure the game kept evolving. The Forgotten City was one such mod, which has now found new life as a fully standalone experience. Though much has been changed, added, and completely rewritten for the game’s proper release earlier this year, the ties to Bethesda’s open-world RPG are still evident within its DNA. The game presents a choice-driven narrative adventure, with heavy emphasis on dialogue and character-based puzzles, that offers the chance to explore a city that time forgot.

It all starts with players waking up on a riverbank in a forest, with no memory of how they got there. The game includes a perfunctory character creator, with choices for gender, skin color, and character class (which comes bundled with a perk). Players are then sent to explore some nearby Roman ruins by Karen, the woman who pulled them ashore. Entering an old temple, the ground suddenly gives way and the player plunges deep underground, into some even older ruins that have been hidden down here, undisturbed, for ages. Searching the dilapidated buildings for a way back to the surface reveals a strange orb of light. Lacking other options, the main character steps toward the orb, and is sucked through a wormhole, only to discover that they appear to have traveled into the distant past, as the city is now very much teeming with life.

The Forgotten City delights in posing questions that players must then slowly begin to answer for themselves. Right away, players meet a man named Galerius, who escorts them to the local magistrate, Sentius. He tells a story of a grim fate in store for the city, and claims to be responsible for summoning them here. The city lives in constant fear of the Golden Rule, a law enacted by the gods that proclaims “the many shall suffer for the sins of the one”. If any resident within the city is to commit a sin, all living souls will be put to death. Sentius is afraid the tenuous peace in the city teeters upon a knife’s edge, and has summoned the player to investigate which of the city’s inhabitants will be the one to break the Golden Rule. 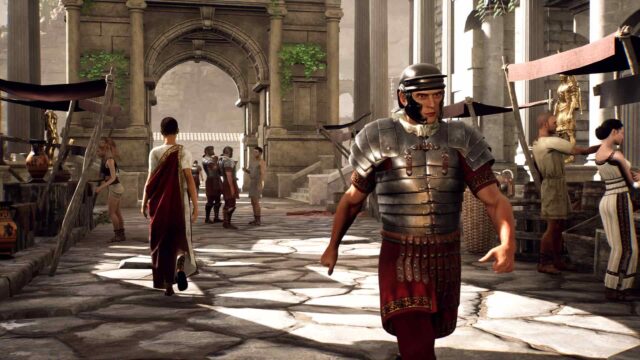 It’s just like Skyrim, if Skyrim was populated by Roman legionaries.

With this setup, the game turns the reins over to the player. The Forgotten City is all about player agency, letting them go anywhere and talk to anyone they like at any time. As new characters are encountered, conflicts are introduced, which are treated as optional sidequests for the player to tackle if they so choose. The main objectives remain securing an escape route from the city and figuring out who will break the Golden Rule, which becomes the primary catalyst for getting to know all the city’s inhabitants. Exploring will reveal a multitude of possible leads to follow up on, such as the Magistrate’s daughter having recently gone missing, a local woman having fallen mysteriously ill, and reports of another stranger having appeared in the city, armed and potentially dangerous. The populace is also about to elect a new Magistrate, and the front-runner may have questionable motives.

Like in Skyrim, time advances in the game, and eventually a sin will be committed somewhere in town, by someone — unless the player has already beaten them to it. When this happens, a menacing voice booms down from the heavens, and statues all around the city awaken to life, brandishing bows with which they shoot the citizens, turning them into golden statues where they stand. In a last desperate act, Magistrate Sentius reopens the time portal, allowing the player to escape the doomed city and return back to the start of the day. Luckily, any items picked up stay in the player’s inventory, ensuring progress is maintained.

Many of the characters’ quests are completely optional and can be tackled in any order the player chooses. Each one acts as a puzzle of sorts, and can be slowly chipped away at over the course of multiple time resets. As major milestones are met, the game either rewards the player with a permanent item, like the golden bow that is used during the game’s one combat mission, or splices in new shortcutting dialog options, removing the need to re-complete objectives after they’ve been accomplished once. This ensures that over the game’s entire eight-hour runtime there is always something new for the player to work on, rather than becoming bogged down in previously completed tasks, a great feature in a time-loop mystery. 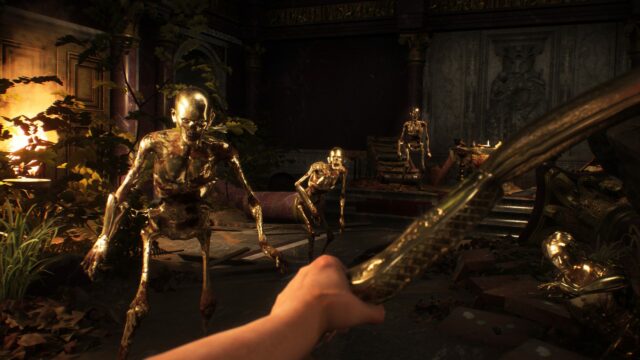 Statues that whisper and turn their heads to follow you when you look away for a moment are truly chilling.

In a game full of player choice, there are various ways to resolve situations; this extends from common sidequests all the way to the game’s finale. Depending on when and how the final sequence is triggered, the player is rewarded with one of four possible endings, plus a few variants even amongst those, as well as a clue for how to get a different outcome. Thorough play is rewarded as certain characters can either survive or perish based on choices made. It is easy enough to jump back into the game after an ending is triggered to try for a different result, and the nature of the time loop makes it so that no path forward is ever permanently cut off.

Visually, The Forgotten City is very recognizable as an offshoot of Skyrim; the game uses the same first-person point-of-view, and the visual style, even with a completely different cultural bent, is still recognizable as classic Elder Scrolls aesthetic. With so much emphasis placed on dialog, it’s nice that all twenty-plus characters are fully voiced, with generally good performances given, though the protagonist is of the silent variety. The music does its part to lend the game authenticity, with atmospheric tracks inspired by the historical period being represented. The tracks are pleasant and fit well with the idea of unearthing an ancient civilization, though they never overshadow the telling of the narrative.

The Forgotten City is an easy recommendation for those who place more emphasis on storytelling than action combat. It is an engaging mystery set in an intriguing location, and the time loop mechanic makes it quite forgiving of mistakes, even going so far as to encourage players at times to break the Golden Rule themselves to trigger the next jump back in time. The game copies Skyrim‘s archery wholesale for its one combat-heavy mission, though the mechanics are quite simple: basic point and shoot. However, the focus here is on choice-driven exploration, with lots of optional sidequests to sweeten the pot. Those who enjoyed Skyrim for its dialog-driven narrative aspects will certainly be able to dig into an interesting tale here.