NIS America announced today that it is bringing roguelike RPG void tRrLM(); //Void Terrarium to North America and Europe. The game, which launched in Japan in January 2020, will be released physically and digitally for PlayStation 4 and Nintendo Switch sometime in the summer of 2020. A $59.99 Limited Edition is currently available to pre-order from NIS America’s North American Online Store and includes: 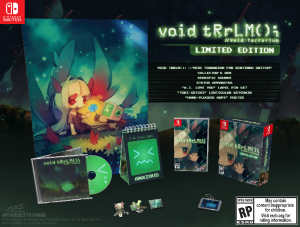 The most recent title from A Rose in the Twilight and htoL#NiQ: The Firefly Diary director Masayuki Furuya, void tRrLM(); //Void Terrarium is set in a world contaminated by toxic fungi, with players following the last known human, a girl named Toriko, and her helper robot. Players are tasked with maintaining their isolated “Terrarium” environment and protecting it from being taken over by the fungi.