By giving players the gatekeeping boss fight right away and otherwise leaving them to their own devices, Roguebook adds a few key considerations that make adventuring in the game more compelling.

In the same way deck-builders quickly amassed on store shelves in the board game space, roguelike deck-builders have become another booming sub-genre. Much like their physical counterparts, deck-builders are all about efficiency and consistency. Keeping the deck slim by removing bad cards and replacing them with more powerful ones is not only the core strategy to so many of these games, it is in many ways the primary appeal. Deck construction can be meditative and satisfying in the same way putting together a puzzle can be. However, it isn’t hard to see that a lot of these games are going through the motions, hitting the obvious card-battling archetypes, and doubling down on the “less is more” truism of deck-building. It makes sense that with Roguebook, which is co-designed by Magic: The Gathering creator Richard Garfield, that the team at Abrakam Entertainment SA was attempting to push back against some of those philosophies, with mostly successful results.

Taking place in the world of digital CCG Faeria, Roguebook sees the player trapped in a magic book, each page a different adventure map to explore and attempt to escape. Whatever else there is to the plot quickly falls to the wayside as players get deeper into the game. Like the title suggests, the maps formed by the pages are procedurally generated in a giant hex grid. This grid and how the game pushes unconventional methods of deck-building are the primary differentiators for Roguebook. 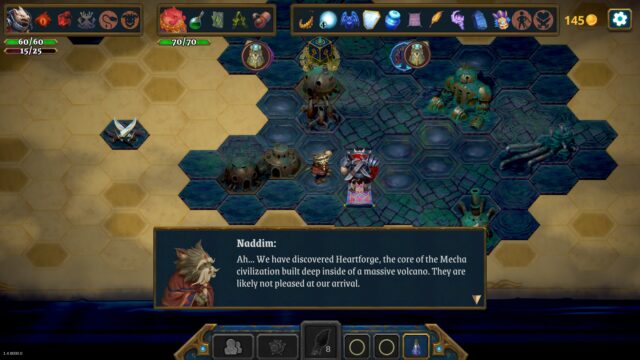 Roguebook’s hex maps are charming little adventures that help to break up the combat with more exploratory elements.

While many roguelike deck-builders are content with ferrying players along with slight variations of a preordained path, Roguebook makes the stuff between the fights a more engaging part of the game. When a run begins, a path to the chapter boss opens up and players are set free to explore the page. Most of the hexes on the board begin blank, waiting for the player to fill them in with ink. Filling in a hex allows it to be traversed and reveals more enemies, vaults of cards to draft, artifacts to collect, and numerous other points of interest. This creates an interesting push-your-luck element to the game. It’s unlikely that players will have enough ink to uncover the entire page, and most ink is earned by fighting enemies. By giving players the gatekeeping boss fight right away and otherwise leaving them to their own devices, Roguebook adds a few key considerations that make adventuring in the game more compelling: “Do I face the boss now or search around to become more powerful”? “Do I potentially spend too much ink exploring this floor, hampering my odds of seeing as much of the next chapter”? The simple act of uncovering more spaces, to literally fill in the pages of the book, is also far more satisfying than simply picking the next node on a path. It doesn’t entirely revamp the general flow of a run, as the same fights will occur around the same time every time, but it does spice up the decision space with some actual consequences.

The bulk of the game is still combat and deck-building and it’s here where Roguebook feels most like an amalgam of other games in the genre. Each run has players choosing a pair from four heroes, each with a wildly different play style and unique card pool. While this has the obvious effect of having six different setups for decks, it also creates new opportunities for decisions in combat, primarily positioning. In combat, one hero leads while the other brings up the rear. The game takes advantage of this in multiple ways, such as having debuffs that only affect the leader, cards that become cheaper to play from either the front or the back, and having conditional benefits that arise from being in a specific position. Card effects can force characters into new positions, requiring an additional layer of planning when figuring out a turn. Especially as powerful artifacts come into play that track position changes, combat does a better job of preventing the game from turning into turn after turn of playing out the entire hand with little consideration for how or when cards are played. The closest analog in some ways may be Darkest Dungeon, where the brain can never quite turn off for a battle and when a battle does come easy it feels more like it comes from smart decision-making rather than sheer dumb luck. 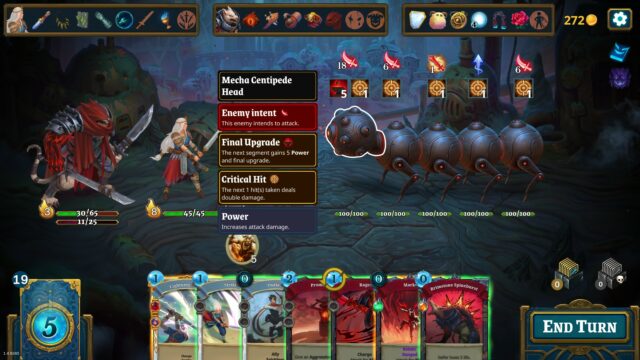 Not all enemies are like this, but this Mecha Centipede is a lot.

This is a genre that is no stranger to sheer dumb luck. Getting the right card pulls, having synergistic artifacts show up, running into enemies in an advantageous order, and shops being stocked with just the right stuff are all things mostly out of the player’s control that can make or break a run. But most deck-builders like giving players the chance to slim down the size of the deck and make it as consistent as possible, eschew the weak starter cards, and replace them with more powerful ones. Roguebook plays very differently. Rather than having to remove cards as a regular part of a run, decks slowly just accumulate in size; even the game’s talent tree is tied to how many cards are in the deck. Instead of hyper-focused combo machines, decks reflect an ever-growing repertoire of abilities the characters have. Not that combos don’t exist — they do and feel cool to pull off — or that there isn’t a means to keep a deck consistent or under control, but it’s an attempt to shake a genre of its habits of making a deck as small as possible as a pipeline to success. However, on this point the game stumbles: the most successful runs tended to be the ones where the deck was smaller and more efficient. Still, it’s an admirable move to make that helps to separate it from its peers.

Outside of these aspects, Roguebook begins to feel a lot more conventional. Players are given a set amount of energy every turn to play cards that can be increased over time. Artifacts are collected that provide passive bonuses. Runs are split up into three distinct chapters with a boss at the end of each. Completing the game unlocks more difficult options for future playthroughs. All of it is adequate, but fairly standard for the genre. The visuals and audio fall in line here as well, feeling functional but without to set them apart.

Though the deck-builder is running the risk of being overexposed, Roguebook has enough interesting ideas at play to make it a worthwhile investment of time. It’s not likely to replace Slay the Spire or Monster Train for fans, but it carves out enough of its own niche that I can see it existing side-by-side. If future updates provide some additional variety in terms of new characters, cards, and artifacts, then hopefully the game can secure a good shelf life for itself as well.