Dark Deity is a statistician’s dream with so many customization options that no two retries of the same map will turn out the same.

Dark Deity is one of the surprises from E3 this year. Developed by Sword & Axe and published by Freedom Games, this turn-based tactical RPG is full of add-ons to make it infinitely replayable.  Many deep and intricate systems are found, wrapping everything up in a welcoming and familiar aesthetic.  The best part is this game was shadow-dropped on Steam, making it available right now.  RPGamer dove into a short one-map demo to highlight the features and gameplay of this hidden gem.  Sitting down with developer Charles Moore to discuss the game while learning more about implementation of the customization over a thirty-minute presentation was a blast.

Dark Deity features a cast of thirty playable characters with a large focus on customization.  Each character will have some voiced lines to bring them to life a bit more and will have ten other characters they can bond with as the game progresses.  In the introduction story scene each of the eight party members had at least one line of dialogue to showcase their personalities.  The map had the merry band of adventurers track down a brigand outpost that had been preying on locals and taken hostages.  The group of eight characters moved about systematically taking out the brigands and saving two hostages, who both joined in the campaign against the brigands.  Two different factions appeared at the end of the fight, both asking about a mysterious amethyst, one group raising the slain brigands as undead to fight once more when failing to get the answers they were looking for, with the other faction joining the adventurers, setting up the next chapter.  The story plays out linearly once a chapter is completed, with only a pause for conversational bonds, equipment purchases, and weapon upgrades before going on to the next chapter. 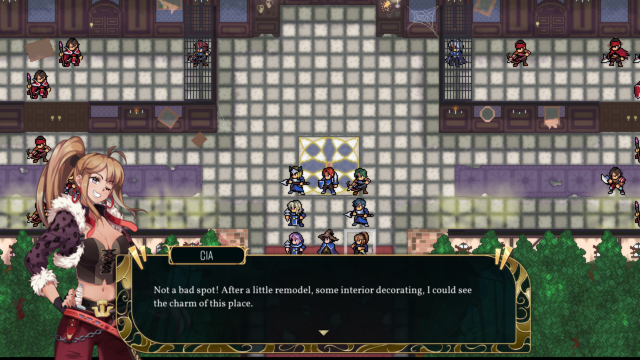 Cia looming large, ready to set up a new base already.

What really stands out are this game’s many customization options.  When a character levels up they have a percentile chance of gaining stat increases.  These stats vary from the usual health, attack, and defence points to the more comprehensive mastery, luck, and speed. Mastery gives the character a higher chance of further exploiting an advantageous match-up, while luck and speed factor into dodging and critical chance respectively. What makes this set-up unique in Dark Deity though is that getting ineffective stat gains does not mean a character remains subpar.  This is shown through the game’s promotion tree.  Each basic class has four different options for a second-tier upgrade, and then a further four options for final tier forms.  Dark Deity gives freedom of choice in promotions, allowing for combinations based off the stats accumulated instead of hoping they turn out right.  An example of this is Lincoln the Cleric ending up with high defence, making guardian a good second-tier role; later, as luck would have it, defensive boosts are replaced with higher-than-normal attack gains, making acolyte a fitting final form.  Care has also been put into each archetype to try and guarantee that each is self-sustaining, including healers being able to attack and defend themselves, and even having options that have them enter the frontlines.

Furthering this customization, every character comes with four different weapons separated into Power, Finesse, Focus, and Balance.  These weapons factor into the player traits as well, for example a Power weapon will do a bit higher damage but also weigh a bit more leading to a decrease in speed in comparison to other attacks.  Figuring out what weapon to use in any situation is simple as the game shows how combat will conclude before each attack is completed.  Weapons are upgraded through a max of four tiers, but unlike with character promotions, weapon-tier tokens are needed for each upgrade.  There will be only a few fourth-tier weapon tokens available by the end of the game, making each a deliberate choice for placing characters in the best position to succeed.  Combat outcomes are calculated through damage type versus armour type.  Damage is presented as slashing, piercing, projectile, arcane, and crushing in the demo and pitted against the armour types of plate, chain, leather, and rune-cloak.  This, in combination with the weapon types and promotion options, leads to a lot of different options for specialists and makes each encounter thought-provoking.  All of these advantages in customization can be exploited by the game’s AI for enemy combatants as well so do not expect the game to be easy as it progresses.  Though the difficulty is promised to be customizable itself with an in-game campaign randomizer that can affect any stat for players and foes alike, from changing up the difficulty to simply changing who gets recruited first or what units an enemy party will consist of. 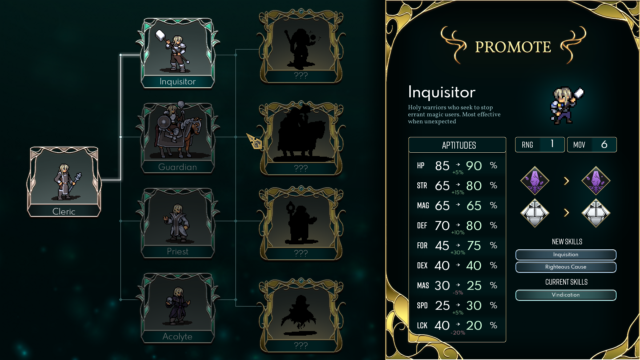 Finally, two other noteworthy systems are in the game.  The first is the eternal aspects, which is an equipment system that adds one of forty different pieces of equipment that can be traded around.  These pieces of equipment provide specific upgrades along the lines of increased damage on critical strikes, or adding damage to a character’s second attack for those fast enough to act twice per turn.  This equipment system helps specialists become truly dominant in their field.  However, even with all these specialists around there’s bound to be an enemy that makes it through and defeats a player character.  Dark Deity doesn’t feature perma-death, but the game does still want to hinder players, and as a result the grave wounds system was born.  With this, when a player loses all health in battle they return the next combat with a negative aspect added to them.  An example of this is Hamstrung which lowers a character’s speed.  These decreases can be forgiving at times to downright brutal, like lowering max health by over half its total.  Grave wounds can stack if a character is constantly knocked out in combat.  This system can be punishing but affects the player’s gameplay and style, rather than perma-death which punishes the player’s time.  These two systems add to the flavour of the game and make each decision matter, and ensure every playthrough will have entirely different turnouts for characters. 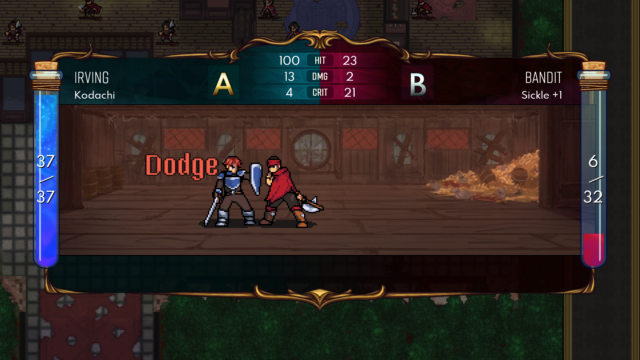 The downside to an aggressive overhead chop is it can be side-stepped.

Dark Deity combines all of this with a simple but fluid animation style that brings players back to earlier turn-based tactical games.  The sprites are varied but basic on the map, and the game transitions to a 2D tapestry with the combatants facing each other. Dialog features large and colorful character art while portraits are used on the map.  Enemy portraits are reused but many characters are generic enemies or stronger named versions so it ends up not being too distracting.  Music is capable and not distracting to the action on the battlefield.  Voice acting is professional and when it comes into play is very welcome, but not every line of dialogue in the game is spoken.

Dark Deity is a statistician’s dream with so many customization options that no two retries of the same map will turn out the same.  Juggling all these systems makes the game difficult by nature.  Even if the default settings are too difficult, players can create a custom game where enemies are pushovers and pummel them repeatedly to their heart’s content.  This is a game with so many layers it is hard not to look at it deeply, and with so many options there is lots of potential for replayability.  For any gamer looking to enjoy a classic turn-based tactical RPG look no further than Dark Deity, because this game has it all.