Unexplored 2: The Wayfarer’s Legacy offers a welcome twist on the action roguelike formula, and it’s interesting to see how its generated worlds evolve.

Unexplored 2: The Wayfarer’s Legacy is Ludomotion’s ambitious follow-up to the 2017 title Unexplored. With the game now available on Early Access for PC through the Epic Games Store, we were able to check out the game’s current build. It’s a game that has some fascinating ideas behind it that absolutely spark interest, though it remains dedicated towards a very specific target audience and does not currently strike as welcoming to newcomers to the subgenre.

Unexplored 2 tasks players with destroying the Staff of Yendor in order to stop the expansion of the nefarious empire and save the world. Controlling the fabled Wayfarer to complete this objective, players must first travel to a place called the Prime Elemental Forge. To get there, they must start by traversing dungeons, forests, settlements, ruins, and more.

It’s a fairly basic story that largely sits in the background, but the most interesting aspect of Unexplored 2 is its procedurally-generated evolving world. When players die, rather than starting with a brand new world, they can continue the legacy of their previous Wayfarers. In the intervening years between the death of the previous and emerging of the new Wayfarers, the world evolves as the Empire’s influence expands and clans grow and fade in strength. The Wayfarer’s previous actions also have an impact, such as destroying some wolves near a village allowing to thrive years later (and having more useful items available to purchase), when those wolves might otherwise cause it to become abandoned. 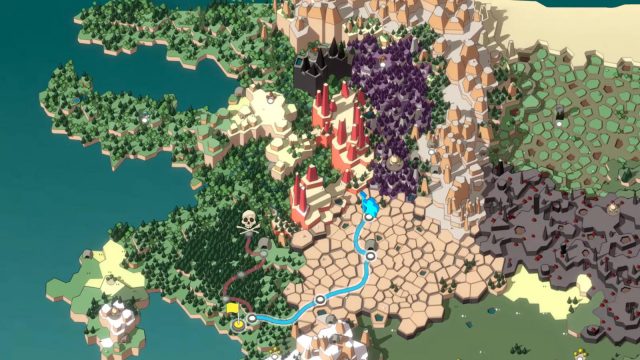 The generated world evolves in the in-game years between Wayfarers.

The adaptive world certainly adds a nice feeling of persistence to the game, especially given just how challenging it is. Even though the game comes with three difficulty levels, even the easy mode is going to be punishing for new players, especially as, though there’s a brief tutorial, it largely just throws players into its open quest with very little guidance. It does offer players the opportunity to assist in forthcoming runs, such as caching items in a safe place or with advantageous world actions from a Wayfarer.

The action combat is currently a mixed bag and feels like the area with the most apparent potential for improvement. It has an interesting facing-off element to it as players and enemies circle around each other looking for openings. It’s fairly basic in structure; players can use the equipment in the left and right hands — including shields and using the Staff of Yendor to cast spells that help in combat and puzzles — by clicking the left and right mouse buttons with button for potions. However, it’s not easy to come to grips with the necessary negotiation of movement, weapon range, and hit boxes. Enemy blocking, at least in the early stages, feels very overpowered, and it’s annoying to try and move around enemies, especially when dealing with many at once.

When out in the world, players will need to deal with a number of survival elements. While investigating locations, the Wayfarer can come across things like locked doors or social challenges. Here, a counter is randomly selected from a pool and generates a description of how the Wayfarer approaches the challenge. Players are ideally aiming for a success counter, but some counters may either add more successes, or give players the opportunity to freely draw more counters and select the preferred option. A hope score provides a general measures of the Wayfarer’s condition. There are a number of things that can affect it, including level-up skills or camping in adverse conditions, and losing hope results in significant penalties. Wounds can also impair the Wayfarer, reducing their maximum hit points and attack power, and last for multiple in-game days. 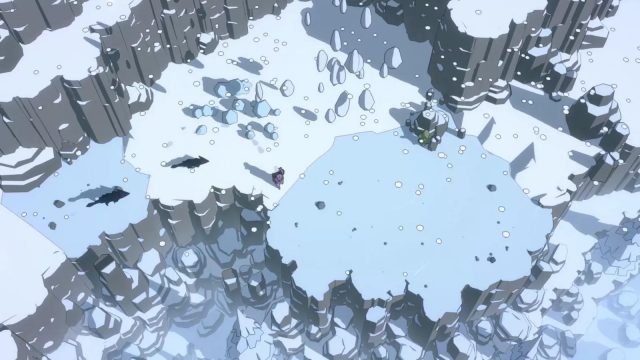 Wolves and the cold are just a couple of the dangers players will need to deal with.

Unexplored 2 features a distinct new visual style to its predecessor. It lends an interesting, fairly abstract character to the title that helps it stand out. However, the style can make it very difficult to find paths in the underground ruins, as doorways blend almost completely into the regular walls, which just causes unnecessary frustration when the game is already challenging enough. Meanwhile, the music in the Early Access is pleasant to listen to, and some generic fictional language voice acting adds a nice touch to some of the event scenes.

Unexplored 2: The Wayfarer’s Legacy offers a welcome twist on the roguelike formula, and it’s interesting to see how its generated worlds evolve. Fans of tough action roguelikes should find plenty to enjoy, though it remains to be seen if it can attract much interest outside of that base. In the brief period of time since the Early Access release, Ludomotion has already released an update designed to address some concerns, so there’s good promise that Unexplored 2 will be improved ahead of its full launch, which is currently planned for 2022.