Recently I took a trip to the city of Heliodor, the first major locale outside the starting town in Dragon Quest XI S: Echoes of an Elusive Age – Definitive Edition. The city boasts exquisite level design. It’s a network of intersecting streets and buildings festooned with decorations. A glistening fountain and sprawling masonry arches impress, yet the inhabitants make the city come alive. The people breathe life and character into the walled confines of the medieval town. Each NPC has their own story snippet to tell, and while some share a single thought, others reveal more detailed drama. Listening to their backstories brings a sense of connection with their town. I’m not passing through only to buy a new sword and shield for the next region’s battles. Instead, while visiting my fellow folk of Erdrea, I’m communing with society and nurturing a sense of belonging with the world. If citizens’ backstories weren’t enough, there is a game mechanic that deepens the immersion factor: sidequests.

When it comes to RPGs, sidequests can be all over the world-map with wide-ranging quality. On the poor end, one of the worst labels for a sidequest is ‘filler.’ Such an excursion feels tacked on like an afterthought and serves no real purpose. Worse, it might distract from the main story, which is the opposite of what players want from an RPG. Rather than detract from the main quest, the goal of a good sidequest is to add to the story and thus enrich the overall immersive role-play experience. This also means that sidequests should offer more to a player than merely fetching an item in order to earn a piece of loot. A great sidequest should strive for the more holistic goal of enhancing the gameplay and engaging the player.

While the primary quest of an RPG beckons the player to assume the main character’s role, sidequests, though secondary, should still be compelling. Otherwise, mediocre fetch quests with dubious rewards become disappointing time wasters that exacerbate the grind inherent in role-playing games. Sometimes they are superfluous carrots on sticks, especially when the bounty is meager. For example, I forged a gold ring for a man, and he thanked me with a weapon that I had already bought in another town. Despite this, my recent visit to Heliodor tells me there’s more to the story of sidequests in DQXI. What I’ve learned is that the real aim of a sidequest should not be the reward at its end. Rather, it should offer further immersion. 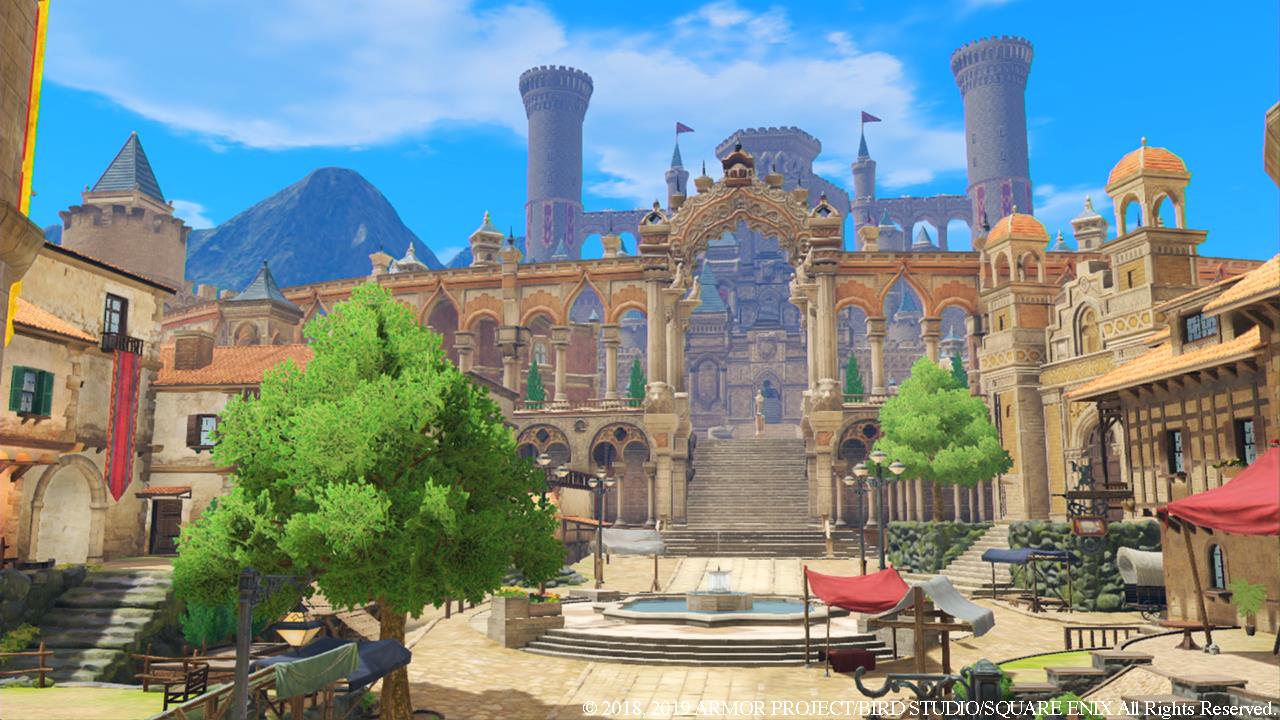 The grandeur of Heliodor was forged by the stories of its citizens.

RPG sidequests should anchor the player to the game’s milieu by connecting with the vibrant towns and characters. This connection deepens the gamer’s experience, which enhances the level of immersion. When I seek high-fantasy escapism in an RPG, I want to suspend reality and enjoy a gripping story. Even though they’re quests on the side, they should complement the main story. What meal is complete without good side dishes accompanying the main course?

In Heliodor, I came upon a young girl who was sobbing. She had lost her cat and needed help to find it. Could I lend a hand? Yes, but I had important matters of my own to tend to. My noble purpose was to meet the king, inquire about my heritage, and discover how my very destiny might intertwine with the fate of the world. What time did I have to search for a feline? In the eyes of the little girl, though, securing the safety of her missing furry companion was no less noble a cause. Being the Luminary of Erdrea, who was I to deny such a request? As in any good RPG, I had a choice to make. I elected to not only be the hero of all Erdrea, but also be the personal hero of the little girl and her cat. After risking my neck on rooftops, I found the cat with its paw stuck in a hole, released it, and reunited it with its owner. Gratitude filled the young girl, and then she rewarded me. I don’t recall what I earned, but I do remember the happiness restored to the girl. I smiled and felt more connected to Heliodor. The fulfilling moment heightened my sense of belonging in the world, for I was no longer fighting to save a world of faceless inhabitants. I met those who made Erdrea worth saving, and my main quest felt more personal, which is a quality of immersion that RPGamers savor.

Well-developed NPCs not only present story information, but also provide emotional connection, which enhances an RPG’s narrative. How the player relates to their desires or emotions fosters robust immersion and draws the players further into the storied world. Interactive sidequests invite players to engage on a deeper and more personal level in the narrative. The little girl that I helped could have been only an NPC expressing sadness for a lost cat. If there was no opportunity for me to make a choice and resolve her sadness, I would have missed enriching engagement. Connecting to persons in my home world is where some of the magic of immersion takes place. I’m not only saving the world of Erdrea, I’m saving each individual whom I encountered.

Of course, if a developer made every single NPC offer a sidequest, it would easily overwhelm both players and the development team. Also, adding mini-quests to a game for the sake of content is easy yet thoughtless. Sidequests are thus an art for RPG crafters. A good developer gives thought and purpose to these short treks off the main adventure’s path. Sidequests should embellish an RPG with deeper involvement. No RPG is perfect, but Dragon Quest XI shows me that excellence is attainable. Finding the best sidequest is a quest in itself. Also, who can deny a little girl crying for her cat?