Patch 5.55 provides the second part of the Patch 5.5 Death Unto Dawn content, and will launch on May 25, 2021. It will contain the final part of the new main scenario quests, which lead into the story for Endwalker, as well as additional updates and the finale to the Save the Queen content, epilogue quests for the YoRHa:Dark Apocalypse dark series, and new rewards for those who have collected all of the available Triple Triad cards. After its recent beta test, the PlayStation 5 version of Final Fantasy XIV will officially also launch on May 25, 2021. The PlayStation 5 version includes faster load times, 4K resolution support, high-resolution UI, DualSense haptic feedback support, and 3D audio support.

The Save the Queen update will add a new battlefield, Zadnor, where the IVth Legion makes its stand on the sunken plateaus. To access Zadnor, players will need to have completed the patch 5.4 main story content and the patch 5.45 Save the Queen content. The update will increase the Resistance Rank cap from 15 to 25, new skirmishes and critical engagements, a new 48-player large-scale assault called the Dalriada, and the final step for Resistance weapon upgrades.

The release of patch 5.55 will be followed in July by a new Make It Rain Gold Saucer campaign, while patches 5.57 and 5.58 will launch between June and August. The patches will be minor and primarily include balance adjustments. August will see the new Moonfire Faire and The Rising events, while the Final Fantasy XV collaboration event will return in September.

The next part of the presentation featured a special Q&A with Natsuko Ishikawa, main scenario writer of Final Fantasy XIV: Shadowbringers and Endwalker, with the final part introducing various new pieces of merchandise. The new merchandise includes two Citizen Watch collaboration models named Light and Darkness that are planned for release worldwide with pre-orders to open from Monday. There is also a collaboration Fender Stratocaster guitar, with orders planned to begin in North America and Europe in late 2021 or early 2022. An electric guitar will also be added to the game’s performance mode in patch 5.55. Other new merchandise — including Crystal Exarch and Arbert figurines, a helmeted Serpent of Ronka plush, a silver pendant, and more — is available to pre-order now from Square Enix’s online store. 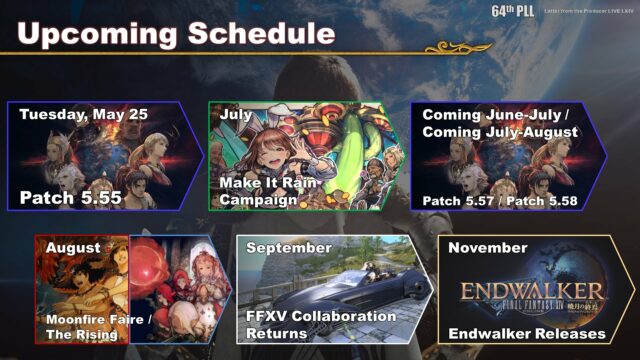