In the twenty-odd hours I’ve spent with it, cyberpunkdreams has provided an enjoyable and addictive gameplay loop.

Late Night Games’ cyberpunkdreams is a text-based free-to-play RPG that sees players exploring and living in 2090s Cincinnati. RPGamer had the opportunity to try out the game’s ongoing beta version ahead of the planned launch on Steam on May 14, 2021, as well as chat briefly with solo developer Rob Chant about the game and its creation.

Rather than determining their character’s identity at the outset, players provide little bits of information about their character and backstory as they get further into the game through various events and prompts. Though it’s a well-worn RPG trope, cyberpunkdreams uses amnesia in an effective and interesting way for the character establishment; players are given a flexibility as to what they uncover about their mission and past while guiding their present and future. The introductory section gives players the task of simply getting into the city, which has now sprawled to 24 million inhabitants following civil wars and environmental degradation, by scrounging up the money needed to pay the border guards or finding another much riskier route.

Rob has been working on the game for almost ten years. The writing is engaging and very much fits in with its cyberpunk theme. Cincinnati was selected as the setting for its place as a crossroads both culturally and geographically, being the final major city before players head into the less hospitable lands to the west. The game is designed to be open-ended; individual questlines will have conclusions, but the game is designed for players to keep going as long as they wish, with further content to be added as time goes by. 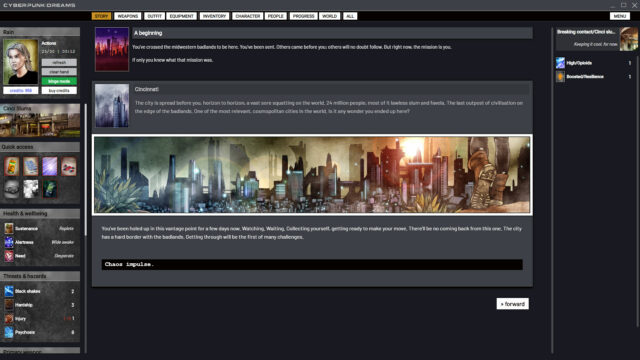 Welcome to your new home.

Once players have created their character, they are given free reign over what they do and which quests they want to progress. There are numerous locations for players to visit, each providing its own facilities and opportunities. As players venture around the city, they obtain a plethora of attributes, passive bonuses, items, skills, etc. and these in turn unlock subsequent opportunities. Players will also need to keep on top of their needs such as hunger and sleep, and potentially take care of any injuries they incur. Eventually, players will get in contact with other denizens and find opportunities for work or quests leading to extended partnerships and storylines. It’s worth noting that the game deals heavily with adult content, including drug use, sex, and abuse, though it feels like it is simply part of the dystopian world rather than being there gratuitously just for the sake of it.

cyberpunkdreams is about carrying multiple story threads at once and advancing those as opportunities come up, though there are many smaller threads or action-oriented events that can be followed more single-mindedly. Many of the threads introduced early on will require significant work, both in terms of abilities and cash flow, before they can be completed. This has the benefit of ensuring players have some long-term objective in mind from the outset, but it also makes it difficult to fully grasp the ideal cycle. Players will want to undertake actions that don’t seem like they have any initial benefit to be able to obtain enough things like rumours to unlock additional options, and it feels like there could be an opportunity for an optional, linear event that can get players used to the cycle more quickly.

Attributes determine a player’s ability — marked by a percentage chance — to succeed in numerous actions. Most of the time, failing just means merely having to try again later, and often comes with a skill upgrade, so it’s often worth trying even if there is a low chance of success. The game includes numerous factions and NPC contacts. There’s a good variation in how players can play their character and how that impacts both attributes and actions they can take. 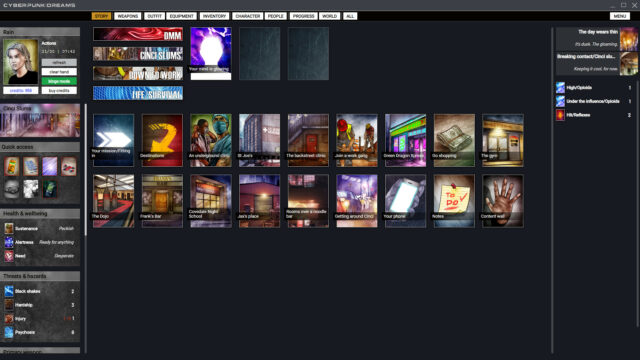 There are lots of places to go, more getting unlocked as player characters increase their familiarity with the city.

Daily advancement is tied to the real world, but it will only progress if players have logged in that day, so there’s no concern about taking a break for a week to find that any deadlines have suddenly passed. Events are primarily drawn from the various decks at the top-left of the screen, which give players a hand of events to select from. These are divided into location-specific events and personal survival events, with each bringing both opportunities and challenges.

There is a large amount of randomness that comes from this, especially when players are trying to advance certain storylines that necessitate drawing an event to progress. However, there’s always a sense of excitement in seeing what opportunities the draw offers and it makes for an engaging gameplay loop, aided by the effective flavour text that each event, even the most minor ones, possesses. On the other side, it can get a bit frustrating when the draw is less helpful, and there is some definitive repetitiveness that comes from the game’s cycle. A notes page provides some reminders on what opportunities players can look to advance, though they will still often need to figure out for themselves how exactly to unlock the next step, or sometimes just wait for the luck of the draw.

The free-to-play element is largely constrained by the number of actions characters have. Each can hold a maximum number of actions, with one action restored every ten minutes, and these actions are used up as players travel around and do business in and around the city, though there are plenty of free actions, such as changing clothes. Actions can be restored by spending credits bought from the game’s store, which are also used for additional in-game benefits such as letting players choose which faction they annoy in certain events or granting access to an exclusive section of the city. It’s pretty easy to just log in and spend the available actions without feeling too much need to spend credits, with multiple characters available and easy to swap between, but the game absolutely nails a “just one more” appeal. 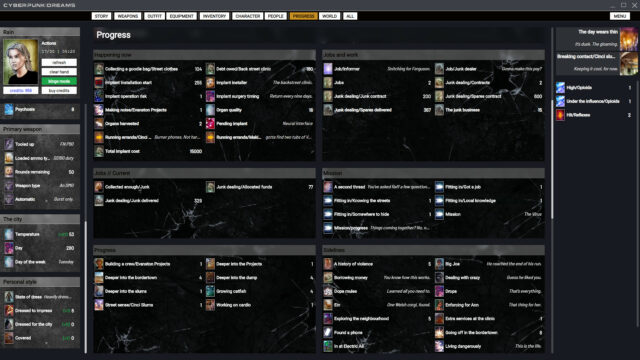 cyberpunkdreams’ attributes system is incredibly deep, but can be hard to keep track of on the player’s side.

The game is fully mouse-controlled, and the UI is effectively built around it while keep the cyberpunk theme. All of the locations and event scenes are accompanied by illustrations that combine well with the writing to embellish that theme. There is a limited amount of music that sits in the background without being either obtrusive or particularly noteworthy, but the writing and illustrations do more than enough to make up for it.

In the twenty-odd hours I’ve spent with it, cyberpunkdreams has provided an enjoyable and addictive gameplay loop, though it definitely feels like I still haven’t fully gotten a handle on its progression systems. Its deliberately free-form and open-world nature might leave players feeling a lack of direction as many paths to progress take a while to be uncovered, but it’s been consistently interesting to log in and see what opportunities might arise.