There was a lot of excitement from longtime fans and intrigued newcomers when Kingdoms of Amalur: Re-Reckoning was announced. The remaster of the 2012 video game was a welcome addition to the growing collection of revised and revisited video games from previous console generations. Not only was the remaster announced but an additional DLC is slated for release early next year. Unfortunately, the PlayStation 4 release of Re-Reckoning is full of bugs, with one, in particular, being game-breaking. To its credit, THQ Nordic has updated the game a few times, but major bugs still exist in it. This impression comes after four attempted playthroughs — each abruptly stopped by different bugs that ruined the entire experience. Gamers a wanting great experience should wait until later patches are released to avoid some very frustrating moments.

Kingdoms of Amalur: Reckoning originally came out in 2012 with a lot of important hands on deck including famed author R.A. Salvatore, Spawn creator Todd McFarlane, and Elder Scrolls IV: Oblivion lead designer Ken Rolston. Created and published by 38 Studios and subsidiary Big Huge Games, the game did initially sell well for a new IP, but financial woes swallowed the companies just a few months after launch. THQ Nordic later purchased the rights and revived it with the announcement of the remaster. The promise of the boldly titled “Re-Reckoning” was a game with a revamped character leveling system, improved camera controls, and visual overhaul. Perhaps with more time passing, these promises will hold up but at the moment, Re-Reckoning has yet to completely fulfill that lofty promise. 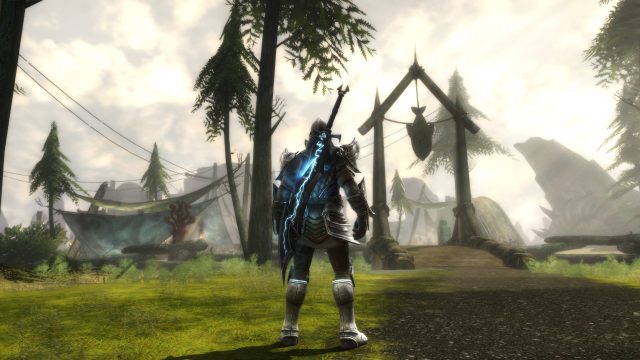 Combat in Kingdoms of Amalur: Re-Reckoning is still enjoyable. Even near the end of the journey, players will find themselves experimenting with character builds.

Players fill the shoes of the once-dead Fateless One. He or she is your standard blank slate hero and has come back to life within the Well of Souls. Embracing the blank slate existence of the hero, the Fateless One can rewrite the fate of the very world with each action they take. The lore is also cleverly integrated into the battle system as players can freely mix and match melee, magic, and rogue combat archetypes into their play styles.

Kingdoms of Amalur’s most appealing aspect back in 2012 was its combat and that holds in Re-Reckoning. There’s a lot of satisfaction in performing combos with different weapons, blasting enemies with spells, and perfecting the parry system. Amalur’s satisfying combat could easily serve as an inspiration to other western RPG developers. Greatsword swings feel weighty, spells are flashy, and rogues bob and weave between enemies with great speed.

The same can’t be said about the presentation, storytelling, and overall structure of Kingdoms of Amalur. After an intriguing introduction, cutscenes are nothing more than exposition dumps spewed from NPCs’ mouths. Their purpose is to add importance and urgency to the quests. Unless players enjoy talking Wikia lore pages, it’s hard to feel emotionally invested. The voice acting does still hold up and if the player can patiently listen to the talking heads, the complexity of Salvatore’s lore does make itself known. If only there was more cinematic flair to the story. 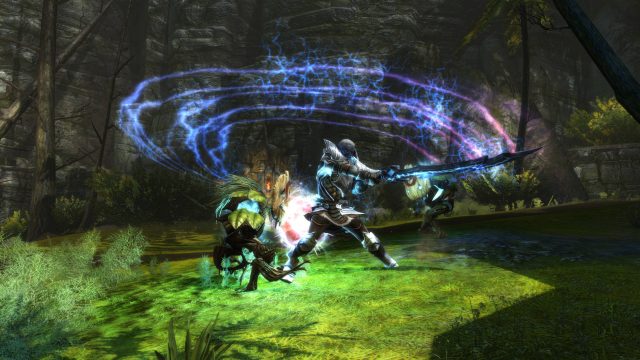 It’s a shame that Kingdoms of Amalur: Re-Reckoning shipped out with so many bugs. Hopefully they’re fixed before new DLC comes out.

There is a nostalgic charm to some of the dated aspects of Kingdoms of Amalur. The colorful, semi-open world art style brings favourable memories of the Fable series, while roaming around the maps is as satisfying as it was in Dragon Age: Origins. It is easy to lose track of the main story and take detour after detour on mysterious paths. On the higher difficulties, it is almost paramount to explore as enemies on the main path increase in difficulty quickly.

So what will keep players going through the hundred-plus hours of Kingdoms of Amalur? Character progression. Dungeon-crawling becomes the true purpose of seeing the journey to its end. Experimenting with Sorcery, Finesse, and Might skill trees never becomes boring — experimentation is even recommended. All three combat styles have drastically different and creative ways to pummel enemies.

The main problem with Re-Reckoning is that it’s just not a very good rerelease. The change in camera distance was nice and can even create a pseudo-isometric combat system, which helps with strategy and point-of-view. THQ also added a level-scaling system that makes revisiting old areas more worthwhile, and loot drops have been adjusted as well so that they reflect the player’s character. However, these are only minor tweaks and differences and the sheer amount of technical issues on the PlayStation 4 version dwarf those improvements, and the multiple bugs make for a frustrating and unpredictable experience. Re-Reckoning will hopefully be reworked by THQ as they prepare the game’s DLC expansion Fatesworn coming in 2021. The Fateless One’s journey deserves to be told without so many digital roadblocks and it’s hard to recommend it in its current state.