Developer Matrix Software and publisher Happinet announced further details regarding the physical PlayStation 4 editions of strategy RPG Brigandine: The Legend of Runersia. A Collector’s Edition and standard physical edition will be available to pre-order from Limited Run Games from October 9 through November 8, 2020. The Collector’s Edition includes a reversible 18” x 24” poster, original soundtrack CD, emblem pin, and will be available for $74.99. The standard edition will cost $49.99.

In Brigandine: The Legend of Runersia, which was previously released for the Nintendo Switch, players choose to lead one of six nations on a quest to conquer the continent of Runersia. The Nintendo Switch version was reviewed by RPGamer’s Ryan Radcliff in June. 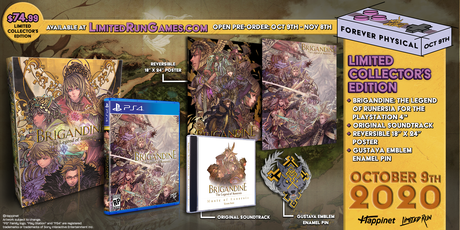