RPG Elements: Final Fantasy XV: The Dawn of the Future

Welcome back to RPG Elements, the corner of RPGamer where we take a look at select merchandise related to the RPGs we love. In this latest edition we take a look at Final Fantasy XV: The Dawn of the Future, a novel created to ensure fans were able to experience the narrative in the final three cancelled pieces of DLC for Final Fantasy XV, including a revamp of the game’s ending. 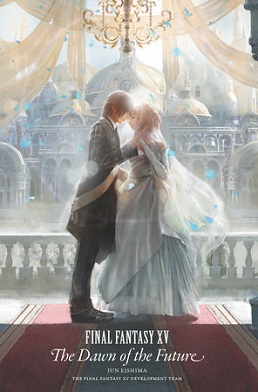 Final Fantasy XV: The Dawn of the Future

The development of Final Fantasy XV (originally announced as Final Fantasy XIII Versus back in 2006) is a lengthy tale, the highly simplified version is that the game was ultimately rescued by the team led by Hajime Tabata. However, after releasing in 2016, it was clear that the troubled development and an effective reset in 2013 led to some rather significant narrative gaps in the game. The team filled some holes with the releases of the Episode Gladiolus, Episode Prompto, and Episode Ignis DLC in the year following its launch. This wave was received well enough that the team decided to create a second wave, that would further tie things up as well as offer a revamp of the game’s ending. Unfortunately, only one of the four planned DLC — Episode Ardyn — was released before Hajime Tabata moved on from Square Enix and development of the others was cancelled.

Rather than just abandoning the new narrative, however, Square Enix partnered with author Jun Eishima to release it as a four-part novel and offer some final closure on the game. It is divided into four parts, covering the same four planned second-wave DLCs, each starring one of the game’s characters. Like the Episode Ardyn DLC, “A Savior Lost” is a distant prologue detailing Ardyn’s history and his fall, while “The Beginning of the End” follows Arenea in the time immediately after Noctis enters the crystal. The second half, “Choosing Freedom” and “The Final Glaive” see Lunafreya and Noctis’ stories offer a combined ret-con to the game’s original ending.

Ultimately, the book presents a fairly enjoyable read to series fans, but it’s hard to give it much more commendation than that. Though the game includes a brief synopsis of the game’s events and quick character profiles, it’s very much for fans of the game and newcomers are going to be lost on many important details. The three female characters are the most interesting parts of the book, with Sol — a new character connected to the Emperor of Niflheim — being a welcome addition to Aranea and Lunafreya’s sections. Sol and Lunafreya’s journey together in the third part is an interesting dichotomy with the main game’s quartet, and it’s nice to see Lunafreya get some time to shine and have her motivations brought to the fore. Noctis shows more maturity, but doesn’t really stand out much as a character, while his trio of allies simply serve as a callback more than anything else.

The fact that the entire second half of the book relies on a complete, clumsily justified ret-con is also rather jarring and belies what it is: an attempt to give Noctis and Lunafreya a happy ending, if the cover hadn’t already given that away. Some specific attempts at justifying particular actions and the potential for redemption feel rather unnecessary and almost dampen the conflicts of the original game. The Dawn of the Future contains its fair share of action scenes, and while there’s nothing really wrong with them, the obvious knowledge that the characters involved are almost certainly going to end up fine removes much of the excitement and tension. Ultimately, The Dawn of the Future does what it sets out to do, and fans of the game are likely to enjoy some of the extra flavour it adds, but it is far from a must-read.

Verdict: A fairly enjoyable read for those who want to revisit some the characters and world of Final Fantasy XV, but little more.