Amazon Game Studios’ upcoming MMORPG New World looks to bring more open-world, action RPG-leaning elements into its combination of PvE and PvP. Though the studio has decided to push the game back to spring 2021 in order to ensure it features as much content as possible, a preview version is available today — what would’ve been its release date — and runs until September 4, 2020, giving all those who pre-ordered or played its alpha and beta versions the chance to see where the game is currently at. Ahead of the preview launch, RPGamer was given the opportunity to check out a large-scale PvP War encounter and learn more about the game and its development in a Q&A session with some of the lead developers. It’s hard to tell at this stage how well that content will fully gel together as an all-round experience, but what was shown certainly awakens interest.

New World is set on the supernatural island of Aeternum, during the twilight of the Age of Exploration in the early 17th century. It’s an uncharted island found within cursed seas and home to a substance called Azoth, which grants massive amounts of power to those who can wield it, but also causes great corruption. The setting helps to play up the survival aspect, an early direction for the game that is now perhaps most evident in its extensive crafting systems that feature over a dozen different trade skills available for players to master with a use-to-improve progression system. However, it also offers players a great variety in terms of weapons. Muskets, bows, swords, hammers, magic, and more are all perfectly viable, and players are encouraged to change their weapon to best suit their situation.

Character growth in New World is handled in multiple ways. The game does not feature set classes, but includes standard experience-based character levels giving players points to spend on upgrading their base attributes. This goes hand-in-hand with the Weapon Mastery system, which determines how good a character is at using them. Weapon Mastery is another use-to-improve system, so players will not be able to simply switch to a different weapon type and immediately remain as powerful as they were. Each weapon type has two skill trees, which usually specialise in different areas such as crowd control, with players able to advance further down either or both trees as they wish the more they use that weapon. On top of this is the usual progression through more powerful equipment, with crafting forming a large part. 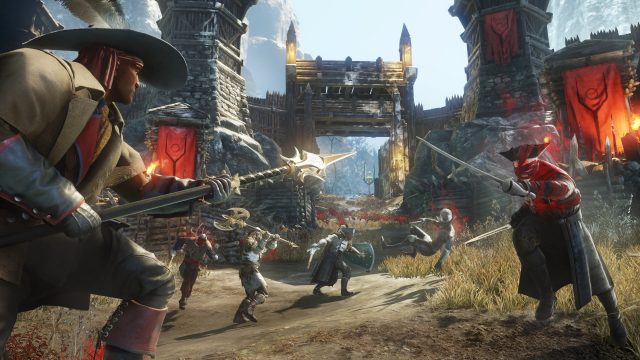 PvP comes primarily from the game’s faction system. At level 10, players will need to choose one of three factions to join. Within these factions players can form or join companies that are at the heart of the game’s conflict. Aeternum’s map features eleven distinct territories, nine of which can be controlled by different factions. The factions in charge are able to set the direction of those towns, including building upgrades and taxes. Challenges for control take the form of large-scale War encounters, 50-on-50 battles featuring siege weapons where the attackers aim to take control of the defender’s fort within a 30-minute time limit. Defenders can set time windows for the War encounters, so there are no sneaky attempts to invade when most people are offline.

Preparation is a focus of New World, both in terms of character builds and more strategic elements like which gear to equip and plans for assault and defence. While in control of an area, companies are able to expand and upgrade their settlements through missions, which will aid their defence when attacked by others seeking to expand. These defences must also be maintained and can be damaged when the fort is assaulted; there’s no building all of the upgrades possible and being done with it. On top of this, there is also a large strategic meta-game over whether companies will want to expand as much as possible and potentially spread themselves thin, or consolidate themselves and have a smaller but more readily defended territory.

War encounters are primarily envisioned for level 60 end-game characters, as they are simply going to be more powerful and effective. At present there is only one general map for these encounters, but the fort being defended will change based on how the defending side has upgraded it through all of their town missions. There are three main phases to the War: the first sees the attackers claiming three spots outside of the fort, the second sees the defenders trying to break down the five fort gates, and the final phase is a melee for control of the central point within the fort once one of those gates is breached. Players respawn after being killed, but the timer increases as the War goes on and more players are downed. In the demo, the attackers always felt on the front foot and emerged victorious with a little over ten minutes remaining, but considering the circumstances of these being inexperienced teams thrown together for the first time, a well-organised defence feels likely to have a much better go of it.

The War encounter in the demo gave a good showing of how the action combat system differs to most MMORPGs and feels much closer to single-player action RPGs. It attempts to put a much greater emphasis on player skill, with ranged attacks requiring correct aiming and good dodging ability also giving players a distinct advantage. Players can have three weapon loadouts equipped and can switch between them on the fly. Each loadout has three skills that operate on a cooldown timer along with the healing options. Effectively planning loadouts allows players to be flexible to the situation. One character in the demo wielded a warhammer for highly effective crowd control, able to interrupt multiple enemies at once, as well as a sword and shield combo that was much better for dueling singular opponents. 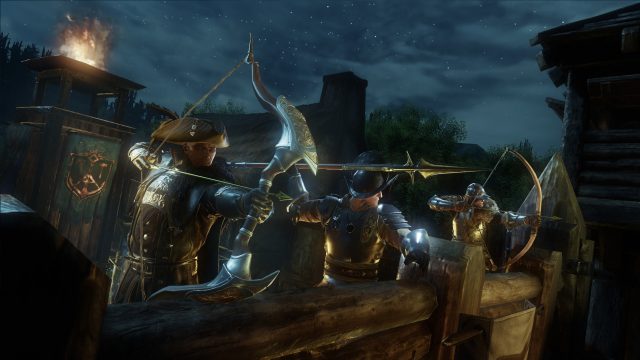 While at an immediate glance it may all seem chaotic, it was apparent that certain characters were slotting into strategic roles and doing so very effectively. Siege weapons form part of that strategy; anyone manning a turret or the like became an obvious target and was therefore better off with stronger armor. While defending siege weapons are set in place, attackers are able to place theirs as they wish. However, while putting them closer makes them more effective, it also makes them more vulnerable to attack. It’s clear that good communication, planning, teamwork, and leadership are just as likely to be crucial elements of War as individual player ability.

New World’s developers mentioned a lot about the synergy between its PvP, PvE, and crafting elements, and how they are designed to circle back to each other. As an open-world game, it doesn’t aim to be prescriptive to players in telling them where to go for story purposes. However, It is planned to include lots of narrative elements and lore about the island and its history, which covers more eras than players might expect. Player knowledge of the setting is built up as they undertake quests from the factions or other groups or by exploring and finding the many points of interest scattered around. The world will contain dynamic events that are impacted by who controls certain regions, and there are also larger, more challenging events including Corruption Breaches and Invasions.

From the demo, the gameplay elements all seem fully realised and working very well together, and based on internal and external feedback the development focus right now is on ensuring there is enough content for players to sink their teeth into. The developers have stated they already have a roadmap of potential additions that could keep them and the game going past 2030. New World has definitely done enough to stand out as a unique and very intriguing entry in the MMORPG space when it launches for PC in spring 2021.