The hour of play gives the definite impression that Star Renegades will offer both a high level of challenge and strategy as players fight across realities against the ceaseless invading Imperium.

Star Renegades is an upcoming squad-based roguelike from publisher Raw Fury and developer Massive Damage, with RPGamer given the opportunity to check out an early demo version of the game. The demo provided access to the first two missions, which includes its tutorial and story introduction. The hour of play gives the definite impression that Star Renegades will offer both a high level of challenge and strategy as players fight across realities against the ceaseless invading Imperium.

Star Renegades features a multi-dimensional setting with players controlling a robot called J5T-1N in the fight against a mighty robotic invading force called the Imperium, which is run by an AI known as Mother. J5T-1N is able to cross the boundaries between realities thanks to the efforts of Professor Zurek. J5T-1N accompanies a squad of three soldiers as they undergo missions attempting to prevent the Imperium from achieving its objectives. 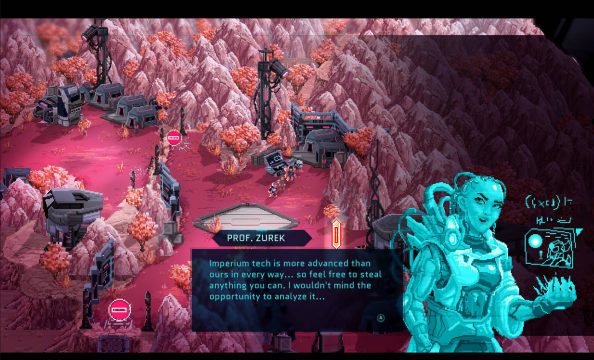 One such soldier is Wynn Syphex, who is introduced crashlanding her ship and provides the combat tutorial part of the game with her brother Davion. The game uses a round-based combat system with each round getting its own timeline. The actions of enemies are always made known to players, letting them plan around those. Each potential action for the party has a specific timing, so may come before or after an enemy, but by using a move first, players not only guarantee a critical hit, but can push back the timing of enemy attacks. Enemies can be pushed for enough back so that their action will not occur in the turn, making it a potential option for dealing with powerful attacks by being aggressive in lieu of simply defending, though there is a limit in how far each one can be pushed back.

Each combatant has shields, armor, and health bars. Shield act as the primary defence, with these usually needing to be depleted before health can be directly attacked, while armor gives an extra, but limited, reduction on health damage. After battle, shields are fully restored, but health stays as it is, and there are limited opportunities to heal, so players will need to focus on keeping their shields — which are more readily recharged through party skills — up as much as they can. Should a party be member be defeated, they are killed and lost for the rest of the mission, putting the squad at a massive disadvantage. The system requires that each move has some thought behind it, as reckless endangering any party member’s health will likely come back to haunt players. 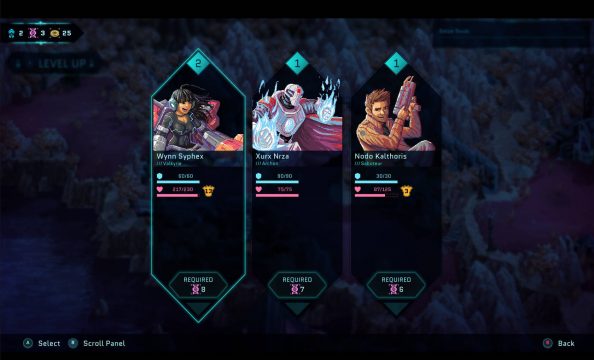 Regular missions require players to advance to their objective by breaching through the Imperium’s defences using J5T-1N, but he is only able to breach a certain number of times per day, requiring the party to camp. At camp, players have time to apply bonuses to party members, including some vital health restoration, using card actions that each party member gains. In addition to providing some highly useful passive bonuses, these actions also raise the relationships between the party members, unlocking further bonuses such as combo attacks as well as providing extra conversations. Players only have a certain number of days to reach their objective, however, with failure resulting in the planet’s destruction. Reaching the objective doesn’t necessarily mean success, however, as the demo went into a boss fight against a behemoth, which swiftly eliminated the party in this run. Part of that was not using the maximum available time to potentially boost the party, but the sheer power indicated that perhaps this was a fight that one is not likely to win until further upgrades are unlocked.

Party members can be levelled up during each mission using DNA rewarded after combat or found elsewhere, upgrading the character as well as possibly adding further combat skills, but return to level one in the next reality. Equipment can also be found that further enhances the capabilities of the party. Between missions, players return to the resistance’s HQ to prepare for the next one. The demo didn’t give much indication of how far the available unlocks might go to assist players, but it did preview some unlockable party members as well as a couple of others who were not involved in the demo missions. It’s not clear at this stage how the story might progress as players go through missions.

Star Renegades has pleasing sprite-based visuals, with some very cool alien and sci-fi designs in the characters, locations, and backgrounds. The music also plays a fine part in working with the visual themes to provide an exciting audio background during combat. Overall, the game looks like it should have a lot of appeal to those who enjoy challenging roguelike and roguelite titles in the vein of Darkest Dungeon thanks to its high level of challenge and highly strategic combat system. Star Renegades is set to launch for PC, Mac, and Linux via Steam and GOG.com on September 8, 2020, with PlayStation 4, Xbox One, and Nintendo Switch versions expected later this year.