Eiyuden Chronicle is the newly-announced debut title from Rabbit & Bear Studios, a new studio formed by Suikoden series creator Yoshitaka Murayama. RPGamer was given the opportunity to ask some questions about the game, which will begin a Kickstarter crowdfunding campaign on July 27, 2020.

RPGamer: How did the formation of the studio come about? Have you been looking to work together for a while?

Rabbit & Bear Studios: Over the past years the core creators have met up at different events, etc., and of course you talk about the glory days as well as regrets. One common thing that always came up was “isn’t it about time we make a game for ourselves? Something WE really want to make? Something we can make for the FANS?” And that dream provided the spark for this current project and setting up the studio.

We’ve been working together now for about six months.

RPGamer: A lot of the elements described sound very similar to Suikoden, is that one particular series that Eiyuden Chronicle is hoping to emulate?

R&B: Eiyuden is symbolic of my growth as a storyteller and collective experience as a game designer but it’s definitely a new title and its own thing. So everything from the world to the characters to enemies are completely different.

RPGamer: The Suikoden series has many highly passionate fans (a good number of our writers among them), what about the series do you think it is that drew them in and how are you hoping to evoke similar passion in Eiyuden Chronicle?

R&B: I’m always focused on the human element and people’s vast personalities and how those tie into a complicated story and deep game system. The goal is to make sure each character shines from a story perspective and gameplay perspective. That’s probably the reason there are so many passionate fans. And it’s one of the most important parts of Eiyuden Chronicle. 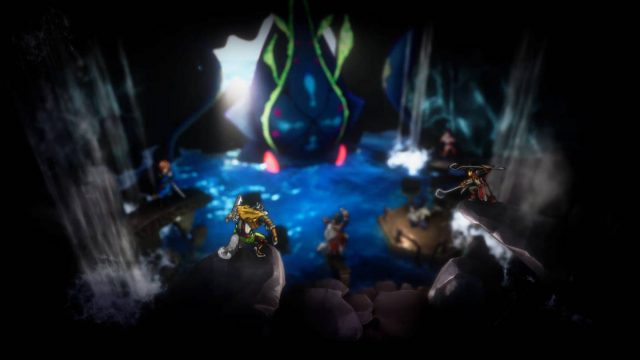 RPGamer: Are there any other titles that serve as particular inspirations for the game?

R&B: From a visual perspective, Octopath Traveler is definitely something that really excited us as a visual style.

RPGamer: Why have you decided to go down the Kickstarter crowdfunding route for Eiyuden Chronicle?

R&B: The core members felt that in order to take the right risks and have full freedom to really make the game we wanted, we needed to remove as many strings as possible. If we pitched this game would a publisher allow us to make it like we wanted to? Would they force us to use 3D? By going the Kickstarter route it affords us control over the IP and is the best way to achieve our vision. That vision is largely about making a game for the fans so this seemed like the right way to collaborate with them.

RPGamer: What platforms are you planning to release Eiyuden Chronicle on, and is there a planned launch window?

R&B: Our initial goal is PC only but the console goal, which covers the common hardwares, will be visible on the Kickstarter from day one. That means it’s not too far off. We are targeting fall 2022 as our release date.

RPGamer: Can you give an explanation on how Eiyuden Chronicle is structured? (Is it chapter-driven? Can players explore the game’s world?)

R&B: Eiyuden Chronicle is meant to be grounded in strong JRPG roots, while adding modern gameplay and hybrid visuals. A deep and enriching story will be an important part of the experience which means a standard linear plot is how it will be structured but I do want to allow players to go off the road a bit too, sort of like you are on a journey that can lead in many directions. 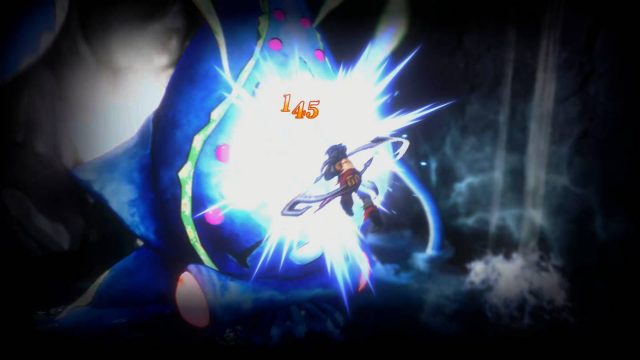 RPGamer: Are there any particular interesting elements to the combat?

R&B: The basic party number is six members. However, we have a few interesting design choices around how to innovate on different battles. For example, we want to provide as many unique battle situations and animations as possible. Using dynamic camerawork and the right effects will give them more visual punch. Also, the backgrounds won’t just be some two-dimensional piece of wallpaper that occasionally changes. For example, if you are battling in the forest and have a Ninja character, they will have the special ability to hide behind trees. Also casting an earthquake magic can change the topography and battle conditions greatly.

RPGamer: Are there any driving ideas or themes behind the game’s setting and story?

R&B: I think one of the best things about JRPGs are the sheer number of different elements and systems to enjoy. Basically something for every player to enjoy. And with a game that features this many characters who all have different personalities and skills to enjoy, finding the characters you like most is one of the gameplay themes in Eiyuden Chronicle.

RPGamer: Can you give some more information about rune-lenses? Are there special requirements for using them and how do they impact day-to-day life in the world?

R&B: Rune-lenses are the core of magic power in Eiyuden Chronicle. However, the power of each rune-lens and how that power is harnessed differs. Some are created through a magical ritual. Some are created through a secret ceremony that has been handed down over the generations. Even others are manually manufactured. It’s this different rune-lens methodology that ends up being a key point in the story.

RPGamer: How do you go about balancing the wider theme of war and national conflict with the game’s personal stories?

R&B: I think that if you analyze history and wars, you’ll find that behind the scenes there are always people. And so it’s not the result of war that is important, it’s the people that participate in that conflict — what are they thinking? What are they hoping for when they wage war? That’s where I like to focus and it’s that backdrop where the larger, deeper story comes into the play.

RPGamer: Does Nowa act as a silent protagonist that players can imprint themselves on or does he exert his own personality?

R&B: Nowa is a character that the player can imprint themselves on but I want to make him flexible so that any player can imagine being in Nowa’s shoes. However, in keeping with modern gameplay, he won’t be a fully silent protagonist. 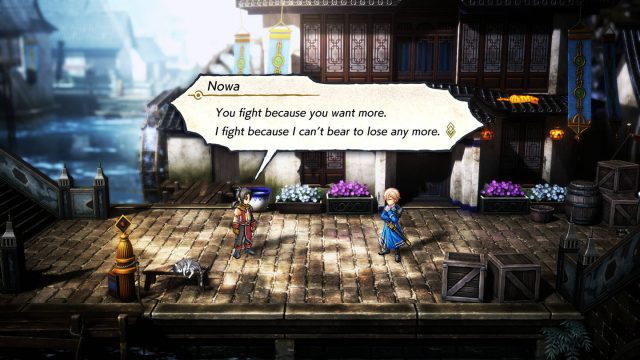 RPGamer: With regards to the 100 heroes who can join the player, how integrated are they within the story? Does each get to showcase their personalities?

R&B: Getting to know these 100 characters and what makes them special is one of the core goals of Eiyuden Chronicle. Since this is a game, the story and the systems need to fit hand-in-hand. That means that you won’t just like a character for their backstory, but you’ll like them for how you control them in the world and the various dialogue they may say.

RPGamer: Though the game is billed as celebrating PS1-era JRPGs, are there any more modern gaming aspects that you’re excited to be able to include?

R&B: While maintaining the core that makes RPGs special, using new technology and hardware advancements allow us to create something we couldn’t have before. Right now we want to really breathe life into the characters. That means it won’t just be about the active battle party you are controlling in the world; your other characters can form other parties and do other tasks and missions. You may see them improving the town or fighting on the overworld with other parties.

RPGamer: How will the fortress and guild systems work?

R&B: The fortress town will be the location where your army lives and can be developed and expanded by the player. We will include many customization options and ornaments allowing you to really build out your own personalized fortress town. The guild will allow you to designate characters to do improvement work on the fortress town or even go on missions. For example, you may need a large amount of a certain resource in order to upgrade parts of your fortress town. By forming a party of characters with a lot of strength and carrying capacity, you can clear this mission faster. Or perhaps you need a rare ore so forming a party of scouts with that ability will yield you better results.

RPGamer: Are there any large-scale battles?

R&B: Since this is a story about war, we will definitely have large-scale battles. Some of the people on the team want to include armies laying siege to your fortress town…

RPGamer would like to express our deepest thanks to Rabbit & Bear Studios for letting us learn about the game and for answering our questions. The Kickstarter campaign for Eiyuden Chronicle will begin on July 27, 2020, and run until August 28, 2020, with more details to be revealed in the coming days.