It’s very pleasing to say that though each of the individual additions may be minor in of themselves, they fit snugly into the original game to add an important level of freshness, keeping it incredibly engaging even to those who did play the original game, and make Royal well worth the revisit in addition to being the perfect jumping-on point for new players.

On its announcement, there was a question as to the necessity of Persona 5 Royal. One can point to the success of Persona 4 Golden in getting the series a brand new set of fans, but that at least provided a whole new platform and came many years after its original, while Royal comes to the same console just a few years after the launch of Persona 5. However, after playing for around sixty hours and progressing a bit over halfway through the original game’s calendar, it’s very pleasing to say that though each of the individual additions may be minor in of themselves, they fit snugly into the original game to add an important level of freshness, keeping it incredibly engaging even to those who did play the original game, and make Royal well worth the revisit in addition to being the perfect jumping-on point for new players.

There are no notable changes to the game’s overall plot so far, and the structure is all highly familiar to those who have previously played any of Persona 3, 4, or 5. Players control a nameable high-school student, codenamed Joker, who moves to Tokyo following some legal troubles. Here, he runs into some other like-minded students let down by the powers that be. Discovering another dimension known as the Metaverse and home to beings called Shadows, the group — who quickly dub themselves the Phantom Thieves — discover that they are able to steal the treasures of certain people in the Metaverse, which changes their hearts in the real world. Acting as vigilantes, the group deals with a number of cases, earning everything from the ire to admiration of numerous parties. 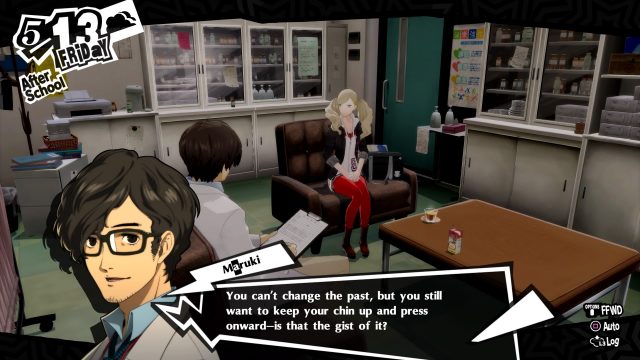 RPG settings could certainly do with more counselors.

As before, the game starts with the Japanese school year in April. There’s roughly one major story mission per month where players will have to go into the Metaverse to steal the treasure, which acts as the dungeon-crawling portion of the game. However, between dungeon escapades, players have reign to do as they wish, generally getting to spend time doing one thing during the day and one thing in the evening, such as improving their attributes through studying or other measures or spending time with the allies known as Confidants, who provide various things that can assist the Phantom Thieves in their excursions. There’s no save data transfer from the original game, but those with Persona 5 save files are given a small, but useful, monetary and item reward at the start.

The story’s themes carry just as much, and arguably more, weight today than they did in 2017, with power abuse, turning a blind eye, and the fickle nature of the general populace on clear display. New character Kasumi Yoshizawa makes her debut bright and early, though so far she has felt more like a regular Confidant; the few events she has appeared in feel separate from everything else going on. However, that’s perfectly understandable given as her importance looks likely focused in the new story parts taking place after December. The other new Confidant Takuto Maruki, who is introduced after the first story chapter plays out, is somewhat similar in this regard, but feels like a more natural fit in his role as a counselor and is able to interact with much more of the cast from the outset because of it. 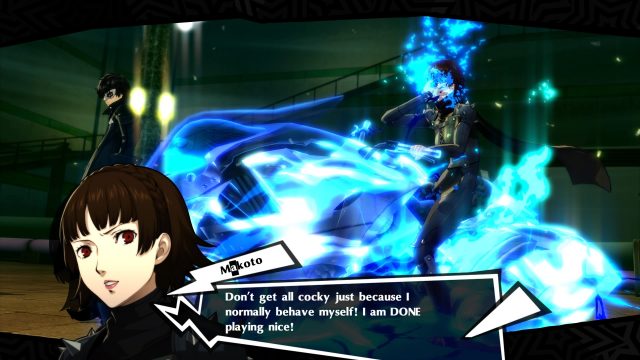 One can’t be a Phantom Thief without the gear (and attitude) to match.

With a couple of exceptions, as well as the new two additions, Confidants and their events play out the exact same way, though they are now followed up by a phone call to Joker that gives a bit of extra flavour plus extra chances to grow the bonds a little bit quicker. Despite being familiar with events, it’s been a delight to witness them all again, and all the neat little touches both new and old across the locations and in the writing remain a pleasure to behold. Atlus’s English localisation is once again great, with the new lines joined by updates to the original text that add mostly subtle but always welcome improvements.

Choice paralysis is still very much a thing to overcome in Persona 5 Royal as players have to decide from a large number of options, but Royal has lots of tweaks that make it easier for players to grow their stats and complete all the Confidant relationships they wish to by the time the game is done. While the responses to Confidants remain the same, the questions asked in class and the crossword puzzles have been changed wholesale. Certain events and actions also provide additional bonuses and, most importantly, Morgana now actually lets players do things most nights in those cases when he previously insisted they go straight to bed. The options are often limited to what can be done inside the café the protagonist calls home, but it gives players much more opportunity to work on those attribute boosts required to advance certain Confidants. 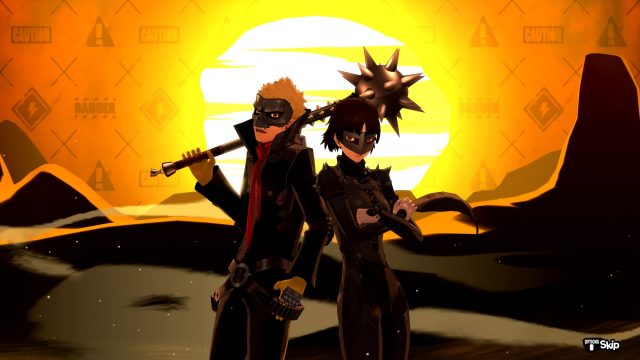 Story dungeons, or Palaces, follow the same overall layouts as they have before, but there are some changes here and there — primarily to take advantage of Joker’s new grappling hook tool to potentially skip certain encounters or find new treasures, though it has been brought in as part of the regular pathfinding puzzles as well. The most notable new parts are rooms filled with treasure called Will Seeds. Each Palace has three such Will Seeds, which combine to form another treasure that Jose can change into a useful accessory. Bosses that have acted as mini-bosses appear to have been moved to guarding one of these. Though being much the same as before, the dungeons are still highly enjoyable to work through as the designs work incredibly well with each theme, such as the museum and bank that form the second and third Palaces.

Mementos is largely the same as it was before, acting similarly to Persona 3’s Tartarus in offering a randomised dungeon divided into sections of floors that players can use to accomplish sidequests, some vital for advancing certain Confidants, and a valuable source of extra experience and money. Its main addition is the new character Jose, who randomly appears on a floor. He acts as another shop, trading special items for flowers picked up while in Mementos. Combat remains as fun as ever as players use elemental skills to suss out and exploit weaknesses as much as they can, using the additional turns to power combos that decimate the opposition. Players can take further advantage of multiple levels of Baton Passes, giving other characters free turns after exploiting a weakness, while new Showtime joint attacks become available in certain circumstances and add some extra flashiness to the already incredible stylish proceedings. New enemies called Disaster Shadows add a bit of variation to some regular battles; these glowing enemies will strike back hard if hit, but when defeated will explode and cause major damage to the remaining foes. 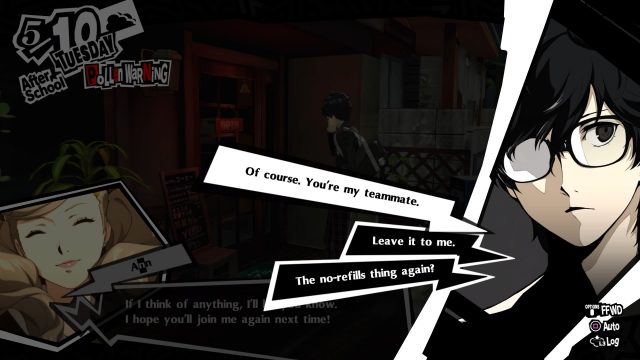 The Confidant events remain the same, but are followed up with an extra phone call.

The music still holds up perfectly, with a few notable additions, primarily the brand new battle theme “Take Over”. It’s highly enjoyable to listen to and arguably works better than the original did over its many, often quickfire, playings. The mix of jazz and rock blends in perfectly with the rest of the soundtrack and mixes incredibly well into the familiar dungeon and victory themes.

So far, Persona 5 Royal has more than justified its existence, building upon the incredible base it received from Persona 5. It will be interesting to see how the post-December content that Royal provides sticks, but at least so far it’s been a delight to join up again with the Phantom Thieves. Those who played the original game more recently may warrant a longer break before diving in again, but for those who did play it back in 2017 or haven’t yet gotten to it, Royal offers a perfect opportunity for the Phantom Thieves to get back out there.