All of this put together makes for a great sense of creeping dread, starting off each run relatively carefree until the realization dawns: time is running out, the character’s well-being is diminishing quickly, and things are going to get worse before they get better. And it works great.

I’ve opined in the past that horror and RPGs often have a difficulty reconciling their differences. An excellent way to make something not scary is to abstract it into a series of numbers and systems designed to not only work in tandem, but in a way that can be understood by the player. Horror relies on uncertainty, a fear of consequences stemming from baser instincts that serve as a survival mechanism. The ability to save, reload, and manipulate systems adds an inherent buffer between any potential terror and the player. And yet, horror games exist, people are still scared by them, and World of Horror makes a solid case that the introduction of RPG elements doesn’t have to be the deal-breaker it could be. 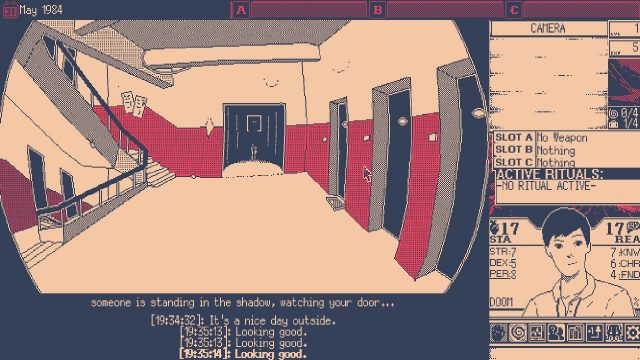 In all my time playing the game I still don’t know if this guy does anything.

Set in unnamed coastal Japanese town, World of Horror is a throwback to the RPGs and adventure games of the 1980s. Presented in a series of mostly-static images rendered in beautiful and detailed pixel art, the game thrusts the player into the role of an investigator looking for the source of the weird occurrences and rumors spreading around town. In the game’s Early Access state there are five playable characters, each providing a different starting package of stats and items. One of four Old Ones is also selected to serve as the primary antagonist, their presence shadowing any given playthrough as they provide a debuff to the player throughout a run. A third option is presented at the start of a playthrough but at this point in the game’s development all but one of the options are greyed out, so it’s unclear as to what that effect will have on the game’s full release.

World of Horror‘s structure is fairly simple. At the start of any run, players will be presented with five mysteries to solve, chosen at random from several “packs” of mysteries used to seed the playthrough during setup. These mysteries can be tackled in any order and are all standalone affairs, dealing with a grab bag of different horror stories, urban legends, and folklore. Actually solving the mysteries involves investigating different locations around town and triggering a randomized event every time. While most of these events are quickly resolved and are interesting to see, the weakest part of the game is how little they tie into the current mystery you are investigating. Since most mysteries involve little more than investigating the marked location until plot relevant events pop up — some of them do actually shake up the gameplay loop in interesting ways — lots of time will be spent seeing similar events tied to each location show up again and again in each playthrough. Hopefully the full game will alleviate this somewhat, but even with less than ten full runs through the game I had begun to remember the multiple outcomes of many of the events. 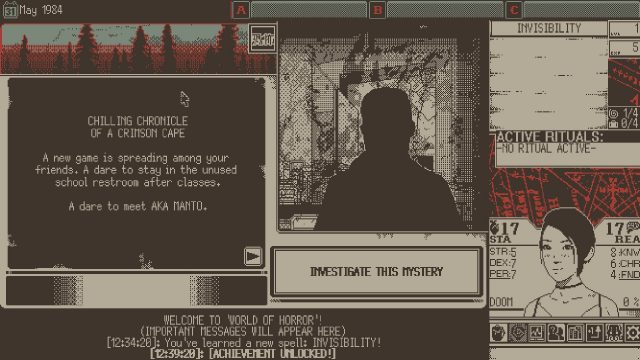 The true horror is daring your friends to stay in school after hours.

It should be stated that World of Horror is a game of attrition. While characters will level up, obtain new items and spells, and gain allies, very little of it comes for free. Many events are skill checks that, if failed, will simply harm the character’s Stamina or Reason, the two stats governing the character’s physical and mental health that end the game if either hits zero. Passing these checks will often result in a small experience gain or the acquisition of a new item, spell, or funds, but given that the events are random and any given character will only be proficient at one or two of the six given stats, it is difficult to anticipate or guarantee success in any of these ventures. Some of the checks do offer some multiple choice options for resolution but will usually still have a check involved as well. To top it all off, the game is set to a timer known as Doom, which represents the Old One’s increasing power. Most actions in the game increase Doom, including investigating, visiting shops, resolving events, and sometimes even casting spells. If it ever fills up completely, that’s a game over. Additionally, completing a mystery will increase the Old One’s influence over the town as well, complicating the game in further ways. All of this put together makes for a great sense of creeping dread, starting off each run relatively carefree until the realization dawns: time is running out, the character’s well-being is diminishing quickly, and things are going to get worse before they get better. And it works great.

Combat is the greatest shake up to the gameplay loop, plopping players in front of a number of horrible visages in an interesting turn-based system. Players are presented with a slew of actions, each costing a set amount of time. Players set up a series of actions that can fit in the time allotted and execute them in order. In retaliation, the enemy will attack either Stamina, Reason, both, or increase Doom. The player’s actions aren’t limited to just attacking and blocking, there are also opportunities to cast spells, scavenge around for improvised weapons, throw items from the inventory, or convince a likely-unfortunate ally into distracting the monster. Some enemies are also too difficult to harm with weapons, instead requiring a series of ritualistic bowing and clapping that you’ll likely have to learn the correct order of by investigating. The combat is not complex, but does a great job of evoking the struggle of a regular person going up against horrific monsters from folklore, and some of the most gruesome images the game has to offer can be found in its fights. 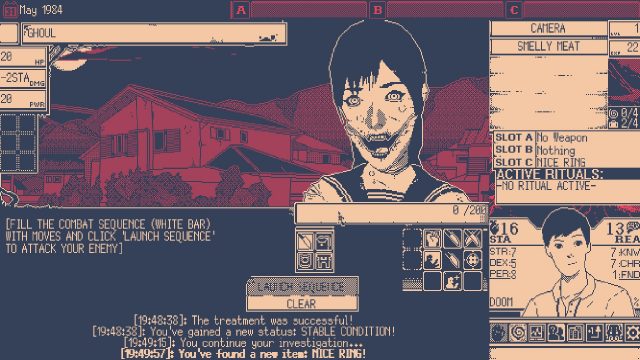 This is what happens when you tell people to smile more.

Evocative is maybe the best word to describe World of Horror. Closest in style and spirit to the board game Arkham Horror, what with having a character running around town solving miscellaneous mysteries while some uncaring space god looms just over the horizon, it’s a game that goes a long way with very little and a lot of that is due to some excellent presentation. A wavering image is enough to draw the eye, the retro-style music slowing down when switching screens is enough to put a player on edge, and the writing, all done in short sentences, is enough to set the scene. A given run of the game lasts about an hour but it’s stuck with me a lot longer than that. In its initial Early Access release, the game could afford to have a lot more variety in its encounters and some of the interface is more cumbersome than desired, but it was all worth it for a refreshing take on some tried and true material.