Even if the localization had been better executed, the game’s exploitative torture scenes feel like a red-hot iron to the conscience that can’t simply be forgiven.

These are not normally feelings associated with video games, and most of us wouldn’t actively seek out experiences that make us feel like this. Most games instead keep us in a safe space of positive sensations; the specifics may differ slightly from game to game, true, but we return to gaming because it is often a pleasant pursuit. From that perspective, Lesser Evil Games’ The Executioner must be given credit for breaking the mold, if nothing else. Its choice-based visual novel elements are nothing new, with players cast as the titular royal executioner of a medieval capital city, but its interactive torture and interrogation scenes, central parts of the gameplay loop, are so abhorrent and detestable, they made me feel deeply unsettled and actually provoked unpleasant physical reactions. Unique it may be, but that alone does not constitute a quality game that should be experienced by others.

Executioners in the medieval justice system weren’t so much concerned about truth coming to light, but rather they were used to coerce confessions out of the accused, who would rather admit to anything than continue to be subjected to the brutal pain and mental anguish. So it is without too much surprise that this is the role assigned to players: to take the frail, the weak, and the helpless, and mercilessly beat and torture them in order to secure obviously fraudulent confessions; the following execution would almost be an act of mercy. While it initially sounded intriguing to “investigate” crimes, the reality feels quite different.

These scenes are essentially presented as a mini-game in which the player must wear down the subject’s health and stamina meters by choosing from a list of punishments. These range from less vicious methods such as denying the victim rest, to the brutal and absolute inhumane, including pushing needles under their nails, water torture, blinding, and severing body parts. Though most of the game — including the torture scenes — is text-based, a portrait of the victim grows more and more agonized as pain is inflicted, and screaming and sputtering sound effects accompany each abuse. It’s not hard for one’s imagination to fill in the rest, and it isn’t a pretty picture; never before has a game managed to make me feel so monstrous about my actions. 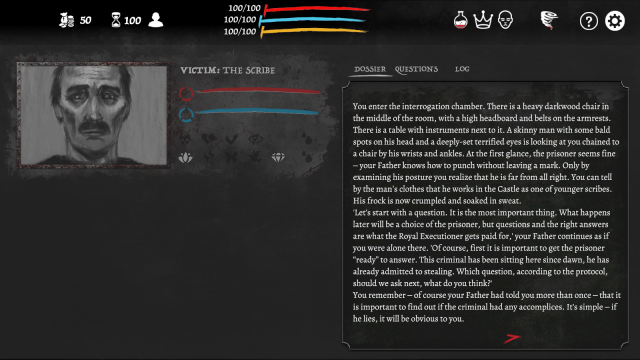 He may be the victim, but he is not the only one about to suffer.

To be fair, the game is simply delivering what’s advertised on the box. “You are the monster,” its Steam page accurately proclaims, and it delivers on the promise of being repulsively abhorrent. There is precious little comfort in that knowledge, however, when the player is put in charge of torturing a young child, an orphan girl, whom the Church wants burned at the stake as a witch. Little can prepare one for the bleak loathsomeness of watching a young child be maimed and drowned at your hand; reading about the subsequent public execution, and even taking part by choosing which type of wood to stack the pyre with, is not much better.

Those that suffer through these early tastes of what The Executioner has in store will, at last, see the story evolve beyond the dungeon torture of innocent victims. There’s an actual narrative that unfolds, of sin and redemption, justice, revolution, and political machinations. The player is given choices to make that affect the outcome of the story, at last offering the chance to earn back a fraction of the Executioner’s humanity. The writing is quite detailed, and the care and research into accurately portraying the filthy medieval living conditions show in spades. Unfortunately, the text is in dire need of not one but several proofreads and editing passes; the great number of spelling and grammatical errors that pop up in just about every other sentence are quite an annoyance, though an even greater issue are the handful of times entire pages seem to either be missing or simply skipped over when certain choices are selected. What results is a highly-detailed world in which one is only catching the story in broad strokes. 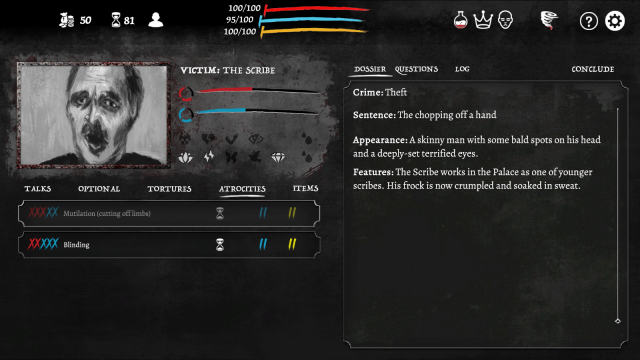 As the victim’s suffering increases, their portrait becomes harder and harder on the player’s soul.

Besides the above-mentioned torture sequences, occasional altercations break up the narrative from time to time, without seeming to have much impact on it. Judging by the amount of open equipment slots in the battle menu, as well as an inventory screen, a glossary, and case notes, it would seem the development team at one point had far grander plans for its game. Making different choices may see these systems come into play more, but as it stands, none of these diversions add anything of value to the core visual novel gameplay. The art style, at least, is interesting in its charcoal-gray bleakness, with a handful of select moments getting full-screen still images that punch up the game’s visual style to a degree. The few music tracks present really just serve as background score while reading pages of text, with voiceover only used to highlight the victims’ suffering and the occasional bit of narration.

The Executioner was not a positive experience. Even if the localization had been better executed and ancillary systems, like the combat, utilized more often and fleshed out better, the game’s exploitative torture scenes feel like a red-hot iron to the conscience that can’t simply be forgiven. Never before has a game literally set out to make me feel like a despicable human being, and this one managed it within mere minutes. Yes, that is kind of its point, but many who can appreciate the attempt at something new will feel overwhelmed by the sickening degree to which this game takes its players’ imagination and turns the screws to it. The fact that, when the credits roll, one discovers that this is simply the first chapter in an as-yet-incomplete tale is its final condemnation. Playing The Executioner was a painful experience, and I was ready to confess to anything just to make it stop.