All-in Games! and CookieByte Entertainment’s Fort Triumph is a strategy RPG currently on Steam Early Access that looks to combine XCOM-style tactical combat with the exploration of Heroes of Might and Magic. RPGamer was given a chance to check out a demo of the game, consisting of the first chapter of its human campaign and a simple skirmish mode.

The campaign’s first makes it clear that doesn’t it take itself too seriously, at least when it comes to the writing. The first chapter alone is packed with humour as a group of down-on-their-luck adventurers seek some coin and end up helping to fend off a goblin incursion. It’s hard at this stage to see if the humour holds up for the full campaign, but there are some clear character threads and traits for it to build upon. The scenes can all be skipped, so it feels as a complement to the gameplay rather than the primary concern. 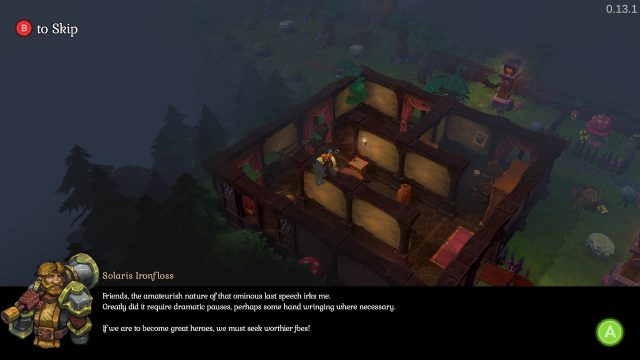 After an initial tutorial, the game takes players to the campaign map. The player’s party starts off at their home town, where they can purchase upgrades, create new buildings, and even recruit new adventurers — though the party members are pretty much set in stone for the first act. The party is then free to explore the randomly-generated surroundings, which in addition to the story objectives include numerous random battles and points of interest that might contain loot or other bonuses. After the party’s movement is used up, it’s time to end the player’s turn for the day, after which the enemy gets its turn to move around and claim any spoils. This process repeats until the story battles are completed.

The one-on-one skirmish mode features a very similar exploration map to the campaign, only it is basically a straight battle to take over the enemy’s town and wipe out its party. The demo had four factions to choose from, though the choices offer more flavour rather than tactical differences, as the character classes seen correlated to those of the humans in the campaign demo. Though the short nature of the demo made it hard to get a handle on the full usefulness of town upgrades, it shows enough options that players should keep engaged with their towns rather than just focusing entirely on whatever the party is doing. 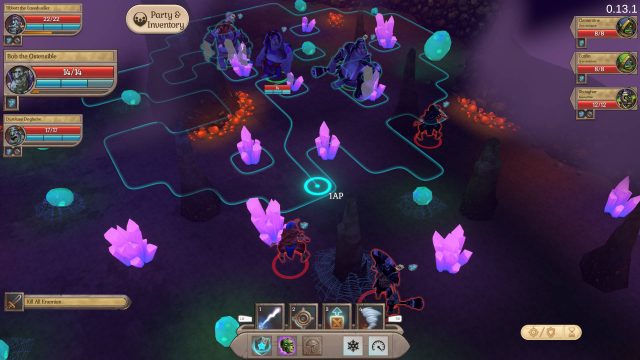 Combat is turn-based, with the player’s party getting the first turn, followed by the enemy, and then any other factions that may be involved. Each character has three action points that can be spent moving or using that character’s abilities. There is a selection of classes available, with the four appearing in the demo covering the usual melee, ranged, and magic archetypes. The randomly-generated environments play an important role in combat, as characters can hide behind the copious rocks, trees, etc. dotted around the battlefields to provide cover. Both sides can take advantage of the environment and movement-related abilities, and cover can in fact be turned against opponents. For example, trees can be toppled on top of those standing next to them or enemies can be kicked into rocks, both causing stuns, while the ranger has the ability to grapple hook enemies into one another.

However, players will want to consider whether they use up all the available action points on their turn or save them for the game’s overwatch system. As long as characters have enough (usually two) action points left over when the player turn ends, they can automatically attack enemies that move out of their fortified positions for a clear strike. This makes for an engaging system that encourages a good balance of risk and reward, providing ample opportunity to set up traps. 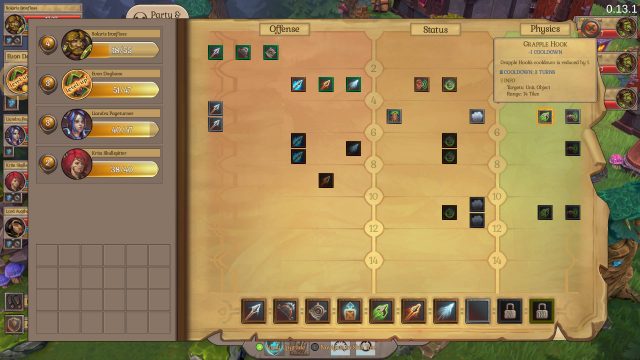 Characters level up from gaining experience in combat. Upon each level up every character can unlock a new skill, which can be a passive bonus, such as the guardian’s ability to counter the first attack made against it in a turn, or a new combat ability, such as the ranger’s fire arrows or the wizard’s ability to blink to a new location without worrying about obstacles or an enemy overwatch. All of the story missions featured two or three groups of enemies split across a larger battlefield, though all of the regular and skirmish battles seen were straight fights against similarly-sized groups to the party. It is only a small snippet of what the campaign has to offer, but the gameplay shows a solid base with plenty of potential.

There are areas for improvement, though with the game being in Early Access this is to be expected. The UI is currently a little unclear and difficult to navigate with a controller, and there was one case when the hidden location of the mouse cursor interfered with it, but these are minor, readily fixable things that should be ironed out as development progresses.

With its focus on humour and its colourful artstyle, Fort Triumph manages to differentiate itself from its inspirations, but has used them well to create a solid base for its gameplay, which the developer has been building upon with responses to player feedback as well as additional features, such as individual hero traits. The game has the potential to provide plenty of hours enjoyment to strategy fans when it exits Early Access in 2020.