Lucifer Within Us PAX West 2019 Impression

Daemons prey upon psychological weaknesses in those with cybernetic implants, which leads those who cannot resist to act upon their inner temptations and worst thoughts.

With indies expanding from their own genre into making some of the best games in many genres, new experimental games are stretching the genre borders.  Lucifer Within Us is one of those games that doesn’t fit neatly into any category.  Is it an RPG with Phoenix Wright-style detective segments, or is it more like a Professor Layton game with RPG elements?  There’s really no easy way to describe it, but however you define this mystery-themed adventure, it packs a creepy punch.

Within the Lucifer universe, everything is ruled by the church of Ain Soph, and per their instruction, all newly born children are implanted with cybernetics.  While this gives individuals many different types of boons and powers, it also makes all of them vulnerable to digital daemon possession.  If you’re immediately thinking “Wow, that sounds a lot like a certain series of Shin Megami Tensei games!” you’re not alone.  When asked, the devs confirmed that the SMT series as a whole was an influence on the game’s lore, even if it doesn’t impact the gameplay. 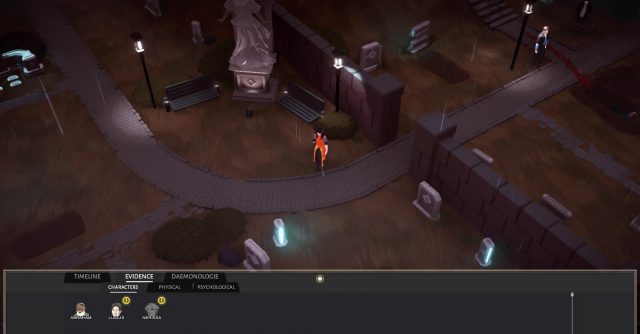 Unlike most mystery-themed games where a scripted narrative must be followed from start to finish (such as a Phoenix Wright game only having a single right answer), Lucifer takes a more open approach to its mysteries.  Daemons prey upon psychological weaknesses in those with cybernetic implants, which leads those who cannot resist to act upon their inner temptations and worst thoughts.

Players take on the role of an interrogator, whose job it is to determine which suspect is behind a specific crime, typically a murder, in order to exorcise their daemons.  To do so, the main character must take testimonies, look for clues, and examine other evidence.  In doing so, the detective will begin to create a timeline of the crime scene, rendered out in full 3D, which can be rotated and explored to discover discrepancies.  Perhaps one of the suspects said they walked across a path at a certain time, but would have only left damp footprints after a rain, which would put them on the path at a later time than they initially testified. 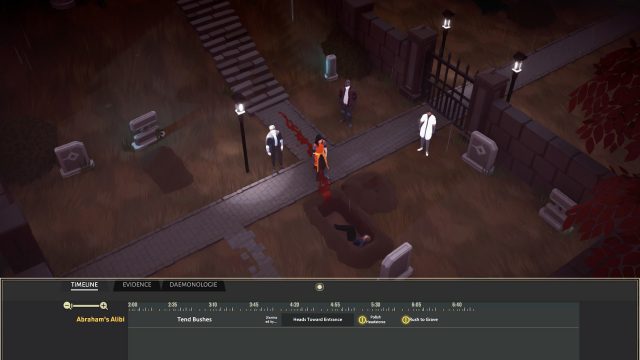 Moreover, unlike games like Phoenix Wright, the focus is on the investigation and interrogation, so if the player makes a mistake or a poor choice, they aren’t punished; they’ll just need to dig deeper and continue searching to find a better answer.  This means anyone can dive into the game, and for those who are familiar with mysteries there will be ample pleasure in being right on the first try.

While Luficer Within Us doesn’t have an official release date, it would come as a surprise if the title didn’t hit in 2020.  For now, those interested in learning more as it’s revealed can check out the game’s Steam page.