Each time Kay and Yu do something together — whether it be a conversation, cooking and eating, crafting, fighting, and exploring — they gain relationship experience.

The Game Bakers has authored numerous creative games that are so different from each other, I wasn’t sure what to expect when I arrived at their demo to play Haven.  Billed as an adventure RPG, what exactly that means remained a question.  While there’s still quite a few unanswered questions, the basic game premise is solid.  The cooperative genre has predominantly had gritty, dark games in recent memory, so it’s nice to see one as colourful and bright as Haven.

The game opens up with two characters, Kay and Yu, a couple clearly deeply in love.  Kay takes on the duties of cooking and tidying, while his paramour Yu takes on the role of mechanic and general repairs-person.  They pair has landed on this planet, comprised of small floating rock islands, to get away from some threat called the Apiary.  Unfortunately, their small ship, known as a Nest, doesn’t have anything cool like matter materialisation, so the two are forced to eat whatever they can find on the planet, which at first is simple appledews.  As the pair explores, they will find additional types of foods — the demo included rattlepeppers, a type of spice that can be used in combination with appledews to create a meal with a little more variety, if nothing else. 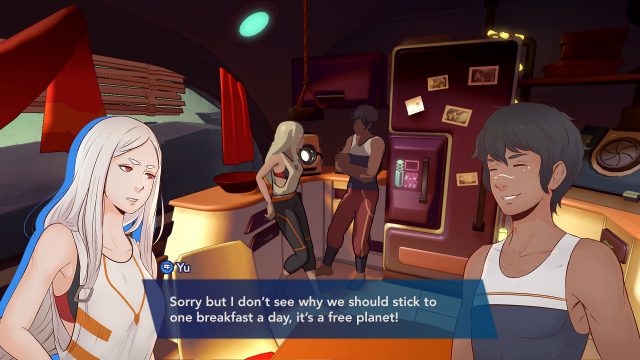 Each time Kay and Yu do something together — whether it be a conversation, cooking and eating, crafting, fighting, and exploring — they gain relationship experience.  As the two reach new relationship levels, their attack and hit points will increase, and they will gain additional powers in their futuristic boots and gauntlets.  The developers were a little coy about these mechanics in general, so hopefully more information will be forthcoming in the future.

Once outside, the game launched into a quick and simple tutorial explaining how to move about the world; the pair have special boots that, when charged up with a power called flow, can fly or glide a small distance above the ground.  It took a bit to get used to the controls (they’re a little twitchy), but once my flight patterns steadied the characters were able to do nifty moves like sharp turns and doubling back and it made the movement feel smooth and fun.  Having charged up their boots, the duo went out to explore, the problem the planet was facing became clear fairly quickly.  A rust-like material was spreading over the rocky islands, though it seemed flow would disintegrate the rusty mess.  If one of the planet’s indigenous animals or plants was touched by rust, they would become infected.

Combat against these infected foes uses both the left and right sides of the controller, or if being played by two players, one controller per person.  To control Kay, players use the D-Pad to decide his actions, while the face buttons are used to control Yu’s attacks.  Each has their own strengths; Yu has attacks only she can use, and the same with Kay, though both are able to shield each other from attacks as well as strike enemies.  For major boss battles, Yu and Kay can coordinate a single attack with a small mini-game. 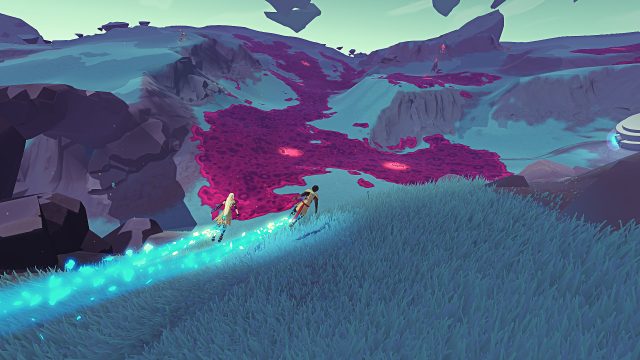 With a 2020 release date, there’s still time to learn more about the mysteries behind the story and gameplay of Haven.  Coming to PlayStation 4, Nintendo Switch, and PC via Steam, play the game solo or bring someone special along for the ride.