In a day where accessibility is regularly confused with difficulty, it’s nice to see a challenging game that doesn’t sacrifice a good control scheme just to make things harder.

It’s a long-running debate among RPGamers: Is Zelda an RPG?  Some?  None?  Maybe just Zelda II: The Adventure of Link?  For those looking for that same action-RPG with platforming elements, but with the difficulty noticeably ramped up like a Metroidvania, perhaps Faeland is your cup of tea.

Originally funded via Kickstarter in April 2018, Faeland focuses on exploration, like a Metroidvania, and guided questing, like a Zelda game, bringing the best of both genres together.  The game has beautiful pixel graphics and feels both classic and modern at the same time.  There’s plenty of territory to traverse in the world of Faeland, and plenty of platforming to conquer.  Thankfully the hero (or heroine, to be implemented at a later date) can hang off of ledges, handy for those just-out-of-reach jumps.  The controls took a little bit to get used to — action quickly becomes intense and remembering which button does what in the middle of being attacked by multiple enemies requires a bit of practice. 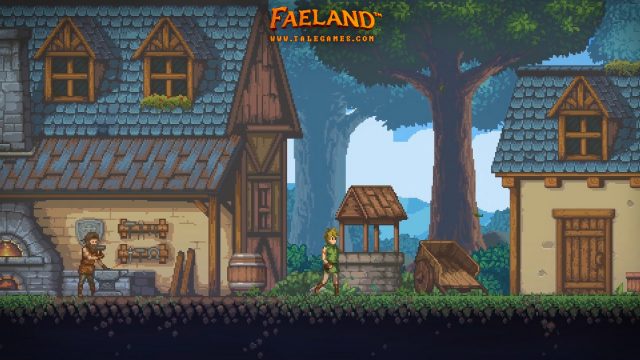 As the player progresses through the early part of the game, they will need to both master their short-range dagger skills as well as a long-range bow.  How to tackle enemies is up to the player; for example, spiders hanging down on their silken threads can either be stabbed as they get within melee range, shot by arrows as they dangle down, or their line can be cut so they can be attacked like any other ground-based melee unit.

Once players have a feel for basic combat, the demo quickly whisks them away for a boss battle against a giant mother spider.  Much like a Dark Souls boss, the mother spider can easily squish a hero, but her attack pattern is predictable. First emerging from one of a limited number of caves, she will spit a webbing which will temporarily trap the player.  After a few seconds, she will retreat back into her caves, leaving behind one to three baby spiders; with a few strikes these additional foes will drop needed health-restoring items, as well as arrows.  The boss has a total of 16 health (down from an earlier build of the game that had 20), and when she has 8 health her attack pattern will be slightly altered.  One, she’s much faster, darting in and out of caves at a much more rapid pace.  Two, if she manages to catch the player in a web she will smash down one of her massive legs for additional damage.  Combine this with up to five spider babies chomping on the hero and it’s a recipe for a quick death, so understanding how to dodge incoming attacks is a must. 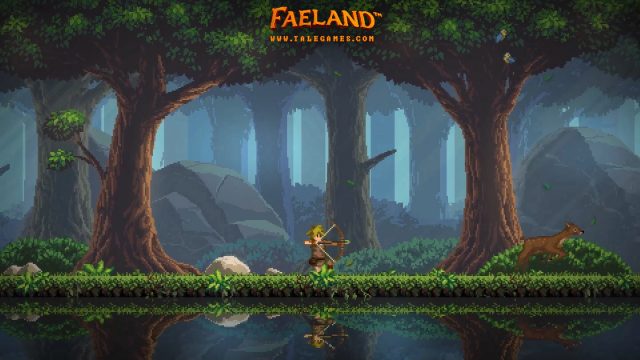 Though it’s difficult to descibe Faeland without referencing several other games, that isn’t to say the game doesn’t stand out in what it’s trying to do.  In a day where accessibility is regularly confused with difficulty, it’s nice to see a challenging game that doesn’t sacrifice a good control scheme just to make things harder.  Faeland arrives on PC via Steam, Xbox One, PlayStation 4, and Nintendo Switch during Summer 2020.