It feels disingenuous to complain about the lack of proper Lovecraft adaptations when it feels like there is a new one released every few months. While very few of them are straight adaptations of his work, there are several that manage to capture the tone and tenor, weaving the unsettling, the uneasy, and the fantastic. The rest borrow the now expected signposts of tentacles and collegiate madmen and apply it as a wallpaper as easy flavor for a generic action adventure title. Frogwares’ The Sinking City lies closer to the latter, crafting a compelling premise and setting that is then bogged down in geriatric combat and repetitive gumshoeing. It’s the kind of game that starts with its best foot forward before petering out over the course of ten hours.

The Sinking City concerns one Charles Reed, a World War I vet turned private investigator who has been having terrible nightmares compelling him to visit the island city of Oakmont, Massachusetts. The town has been inundated by the waters of an unnatural flood that has left many parts of the city submerged and the island mostly cut off from the mainland. Once there, Reed quickly finds himself in the employ of Robert Throgmorten, a man of “interesting” heritage and the patriarch of one of the island’s wealthiest families. While attempting to navigate the sociopolitical situation between the three major families, Reed must also hunt down a professor, who may best be able to help him with his deteriorating mental state. There is also the sinister feeling that something more is going on. 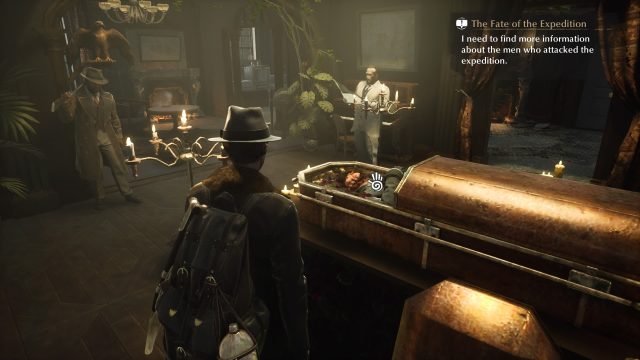 The lavish home of Throgmorten

Frogwares at least makes the effort to address an aspect of Lovecraft’s work that is often overlooked. Before players even see a start menu, a message appears acknowledging Lovecraft’s racist views and that the team decided to include them, despite their abhorrence, rather than pretend they didn’t exist. To have a game attempt to tackle these themes and put them front and center is admirable. Unfortunately, The Sinking City doesn’t really make itself about that. The Sinking City doesn’t really feel like it’s about anything at all.

What drives Reed to the city quickly falls to the wayside as he volunteers himself to help out the local populace, hoping that he’ll be led to the people who can help him with his dreams. But aside from the occasional nightmare or vision, most of the game revolves around solving the problems of the local populace, particularly the rich kind. This involves an initially interesting loop of being given a case, gathering information, discovering locations, and likely a combat scenario or two. It’s early on here that the game shines. Oakmont is a city half underwater, a place where its more likely to be raining than not. Many of the game’s roads are submerged, requiring a speedboat to quickly get around. Dilapidated buildings, themselves succumbing to barnacles, are speckled throughout the game. Entire sections of the city have been quarantined due to the rise of monstrous creatures that seemingly came alongside the Flood that has nearly ruined the city. In spite of this, the town itself seems to have acclimated to its new reality. Sure, crazed individuals pontificate on the side of the road, but for everyone it’s pretty much business as usual. What The Sinking City provides is a unique atmosphere, not one particularly scary, but one that does lean heavily into the weirdness of the place. 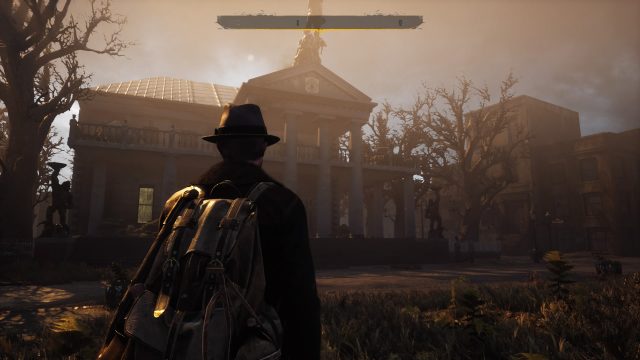 A rare ray of sunlight in the otherwise dour city.

Quicker than one would hope, the game begins to fray at the seems. After solving a handful of mysteries, it becomes apparent that they are all resolved in the same manner. An NPC will provide a problem in need of solving, generally in one of two ways. The first is through combat, in which Reed must go engage one of a handful of enemies in awkward third-person combat. Enemies can be dispatched with firearms, shovels, grenades, molotovs, and bear traps, but all of them are equally turgid to utilize. Fortunately, the game has multiple difficulties for combat. Set the combat difficulty to easy and at least everything isn’t a bullet sponge, though it does nothing to offset the game’s stiff controls. The other method of gameplay is solving mysteries, which is more involving but eventually equally repetitive. Most quests start with the player being given a single piece of information that will lead them to research at one of several buildings, such as the newspaper or city hall. Cross-referencing the right information will result in a new piece of information that will provide a location the player must track down themselves. Upon arriving there, the player will likely reconstruct a crime that took place there, earning a new piece of info that will lead them to the next location or solve the mystery right there. Combat will also be littered throughout the trek, so its impossible to avoid fighting altogether.

These investigative puzzles have difficulty settings distinct from the combat. The difficulty settings offer different levels of given information to the player, with the most difficult requiring the player to basically keep track of everything themselves. The game has a note system and waypoint system that the player controls, which helps give a sense of discovering things independently of the game. Ultimately, these quests, and the game itself, offer very little in the way of satisfying progression in either structure, plot, or mechanics. Skill trees are in the game, but they only exist to provide quality of life improvements, like carrying more ammunition, increasing health and sanity, and increasing the amount gained from scrounging for items. Scrounged items can be used to craft any of the game’s consumables, but the system is so sparse and easy to manipulate its a wonder why it even bothers. The systems in the game are quickly introduced but never grow or evolve. The only major difference between side content and the main campaign is the occasional underwater section. These offer an appreciated change of pace but are bland. Reed slowly trudges through submersed environments, periodically shooting a fish monster with a flare or harpoon, before entering one of the underwater temples that, while the only real occurrence of new scenery in the game, are small and underused. 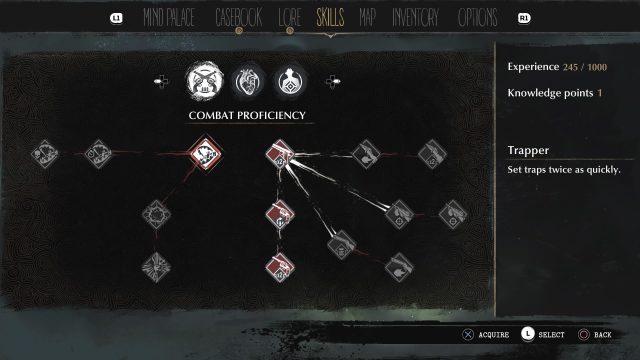 Skill trees are limited and can easily be filled by the end of the game if keeping up with side quests.

The Sinking City is a game that plays its hand far too early. For every interesting idea at play, subpar gameplay taints the experience. The once mysterious and cryptic city soon gives way to a series of identical houses and warehouses. The story that should be carrying the game fails to maintain interest in the ensuing hours, leading to an ending that feels inconsequential despite the stakes. Given the base repetitiveness, it’s hard to say that it’s a game that would be improved with simply tightening its mechanics. A better and more focused story may help, but it’s still hard to imagine a result that doesn’t wear out its welcome long before the credits roll. The existence of The Sinking City is an interesting experiment, but one that doesn’t succeed in any meaningful way.