Shining Resonance is almost exactly what it looks like, and people’s opinions of it will vary greatly depending on their predilection for a straightforward action JRPG.

Sega’s Shining series is renowned for switching things up, perhaps more so than the Final Fantasy series, as it happily leaps across RPG subgenres. Its latest title, Shining Resonance, takes the form an action RPG and was originally released in Japan for PlayStation 3 in 2014, where it seemed destined to stay. However, a new Refrain version has allowed the game to finally release this week in North America and Europe for PlayStation 4, Nintendo Switch, and PC. After roughly ten hours with Shining Resonance Refrain on Switch, the overriding feeling is that the game is almost exactly what it looks like, and people’s opinions of it will vary greatly depending on their predilection for a straightforward action JRPG.

The game starts with a quick twenty-minute introduction, which forms the game’s demo, as Sonia Blanche leads a team to rescue a young man named Yuma Ilvern from a prison. Yuma himself needs some persuading towards being freed, however, as he harbours the soul of the legendary Shining Dragon within him. This gives Yuma the power to actually transform into the Shining Dragon, but the threat and danger of that power being unleashed make him unwilling to use it. However, once Yuma is rescued, he comes to the city of Marga, capital of the island nation of Astoria and eventually does decide to help Sonia — the nation’s crown princess — and her countrymen in their now decade-long struggle to stave off the advances of its neighbouring empire.

The story so far has been what was expected, with little deviation from the usual JRPG template, as events first persuade Yuma to take up the good cause and then go about the business introducing additional characters through a few skirmishes with the empire’s forces. Most of the characters unashamedly fall into traditional archetypes, with Yuma taking the role of the reluctant, slowly-more-willing hero and Sonia the traditional action princess. This applies to the antagonists as well, which include the traditional scheming underling, the mad scientist, and uncooperative young man who’s only hanging around to be able to fight bigger things. Nevertheless, the characters have done a decent job in making the story enjoyable despite its lack of anything that breaks the usual and admittedly clichéd narrative mould. 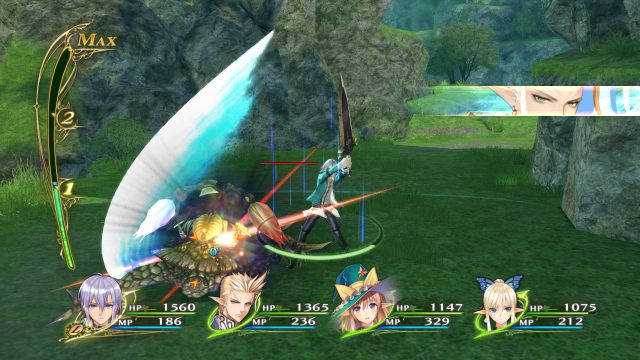 The action combat is more deliberately paced than that of the Tales series.

For at least the first three chapters, the city of Marga acts the Shining Resonance‘s main hub, with most events and journeys into the world resulting in the party heading back to regroup or decide what to do next. The main story quests will require players to venture out into various parts of Astoria, which is made up of a series of connected zones in lieu of a world map. Getting around Astoria is fairly quick, however, as none of the zones are too big. The level of monsters found in these zones also appears to scale up depending on what chapter of the game players are in, so even battles in the first zones just outside of Marga at least remain relevant in terms of granting experience.

Combat takes place whenever the player runs into one of the visible encounters on the field, wherein the game places down a large circular battlefield while any additional enemies wander in. Four party members take part in the fray, one controlled by the player and the rest by the AI. There some very limited commands but thankfully the AI does a useful job healing, distracting enemies, and generally surviving. The face buttons are used for the usual options of a basic attack combo, as well as for defending, dashing, and a more powerful break attack. The controlled character has a ring around them that denotes how many action points they currently have, which are required to attack, but this refills quickly. Each character has four active skills that they can use in battle, running the gamut of healing to physical attack skills to offensive spells to buffs, which can be changed in the menu. These skills all use up MP, which is restored by doing basic attacks or through items. There are inevitable comparisons to be drawn to the Tales series, though Shining Resonance‘s combat system is a lot more deliberately paced than those in Tales.

Transforming Yuma into his dragon form is done freely, and while it is certainly powerful, there is a significant danger in doing so unthinkingly; if Yuma runs out of MP while in dragon form — and all of the Shining Dragon’s actions use up MP — he will go berserk and attack both allies and enemies. The best way to use the form is in conjunction with Shining Resonance’s B.A.N.D. system — one of the more obvious allusions to the musical themes of the game. Here the party will do a special performance, using their weapons as instruments, that uses up the meter on the left side of the screen and results in a party-wide buff, with the particular buff applied depending on the song used and who is selected as the B.A.N.D. leader. However, in addition to the buff, it also ensures that Yuma will not turn berserk and so lets player safely go all out with his dragon form while the song is still playing. Shining Resonance‘s combat is not going to be hailed as the best example of an action battle system and there are times the combat can feel a little bit clunky — particularly as nearly all special attacks take a bit of time activate — but on the whole it works pleasantly enough, with boss fights so far rewarding tactical thinking and sensible character movement. 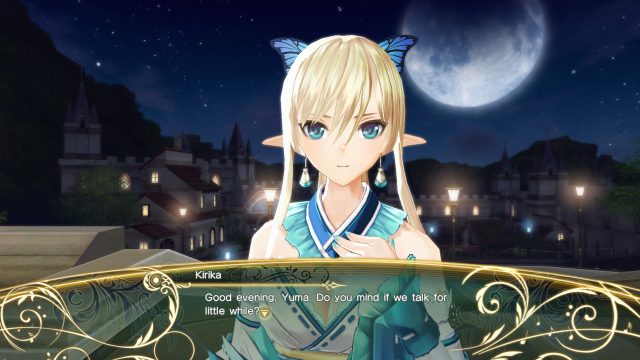 Night-time conversations can lead to date events the next day.

There is no traditional equipment system, but plenty of ways to adjust characters on top of the aforementioned skill selections. Each character can equip three or four Aspects, gems that provide passive bonuses such as attribute boosts, status resistances, and more. Each character can also have the Armonic weapon tuned for different passive effects — perhaps adding an element to all of their attacks or adding an extra attack to the base combo. Tunings level up the more thay used, adding to the base attributes of the character using the Armonic when that tuning is applied.

Character relationships form a big part of Shining Resonance, and even play a role in combat through the Bonds menu. Players will unlock various character traits throughout the game, and by equipping these traits they can set up different connections between the various characters. These Bonds have the chance of activating in combat, providing various bonuses depending on the type of bond that is set up. Character relationships play important roles in both the main story and optional side events; while in Marga, players can invite other party members to spend time at night with Yuma, having conversations that can lead to date events the next day, where Yuma and the other character will spend time together in town, building their relationship.

There are plenty of other side events and optional quests to view and take on in Marga. The side events are neat little vignettes that add to the characters, often coming with some slice-of-life-style comedy. On the other hand, the side-quests are simply additional busywork that players can do while out in the field, tasking them with killing certain monsters or collecting items, for relatively minor rewards. New events or quests generally appear every time the party rests in Marga’s inn, but the quests given will simply cycle through, so there appears to be little point in paying specific focus to them. Shining Resonance also features optional multi-floor dungeons available through a special grimoire held by one of the NPCs. These provide an opportunity for extra leveling and challenges and can reward some useful items, but at first look appear to be almost completely disconnected from the rest of the game.

So far, Shining Resonance Refrain has done what its trailers indicated it set out to do, but not much more. The game looks decent and there are plenty of nice character designs, although none of the locations stand out in any way, and it runs perfectly well on the Nintendo Switch even in handheld mode. Shining Resonance seems more than happy to run with traditional JRPG tropes and cliches, but for many of those interested in the game prior to its release that’s not necessarily a bad thing. Those looking for anything new and mind-blowing won’t find it here, but there’s certainly a place for a new action JRPG, even with all the trappings that entails.