Sega has released a new English trailer for the upcoming tactical RPG Valkyria Chronicles 4. The video, viewable below, introduces the main characters from the Federation’s Squad E, which undertakes a mission to take over the Imperial capital and bring an end to the continental war. Appearing in the trailer are squad leader Claude Wallace, heavy weapons specialist Riley Miller, shocktrooper Raz, sniper Kai Schulen, scout Minerva Victor, and the medic team of Karen Stuart and Ragnarok.

In addition, Sega also announced a collector’s edition for the game. The “Memoirs from Battle” Edition is priced at $99.99 and includes:

The edition will also include access to two side missions featuring characters from the first Valkyria Chronicles game. These missions will also be available to purchase separately as add-ons when the game launches.

Valkyria Chronicles 4 returns the series to the same time period and world as the previous three games, but leaves the independent nation of Gallia, instead following the Federation’s Squad E on its mission. The game released for PlayStation 4, Xbox One, and Nintendo Switch in fall 2018. 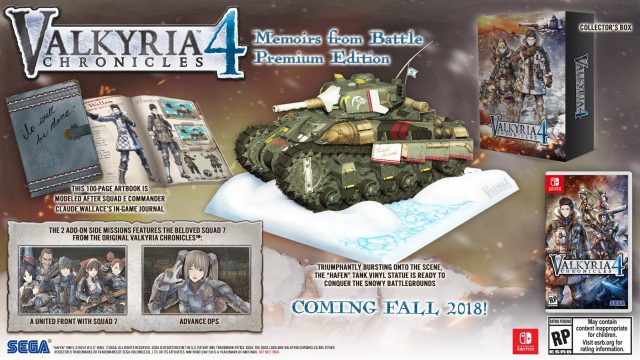