It Takes Two to Treasure Hunt

Go back in time a few years, and most RPGamers probably wouldn’t be able to tell you who Falcom is or what it’s produced. Despite a history as lengthy and storied as Square Enix, it’s only in recent years that the company has jumped to the forefront of the RPG scene. This is largely thanks to the ongoing efforts of XSEED Games to bring the Ys and Trails series to the west. XSEED’s latest Falcom import is a series that, until now, has had virtually no exposure in the west, but it’s a fitting choice. Zwei: The Ilvard Insurrection is what you’d get if the Ys and Trails series had a ridiculously adorable baby.

Although technically the second game in the series, Zwei is thankfully a standalone story. The protagonists from the first game make an appearance, but any knowledge one needs from the previous games is provided through dialogue. The series takes place in the world of Granvallen, which is composed of a series of continents and islands floating in the sky. The hero of this particular tale is Ragna Valentine, a red-haired aeroplane pilot and treasure hunter who crash-lands in the country of Ilvard after being attacked enroute by a pair of mysterious individuals riding dragons. He’s saved by Alwen du Moonbria, a century-old vampire princess whose castle has been stolen by the same individuals. The pair form a blood contract and set out to take it back, uncovering a dark conspiracy in the process.

While the world isn’t nearly as complex or as serious as those seen in Ys or Trails, Granvallen has its own charms, and Zwei takes a page from Trails in being extensively character-driven. Although it’s a small country, the people of Ilvard are all unique and interesting, and players can get to know them extensively over the course of the game. The main characters in particular all have distinct personalities and their personal stories are interwoven into the fabric of the plot in a way that’s become something of a Falcom signature. Zwei‘s distinct art direction adds to the charm, featuring character models with deformed bodies, huge eyes, and expressive faces. 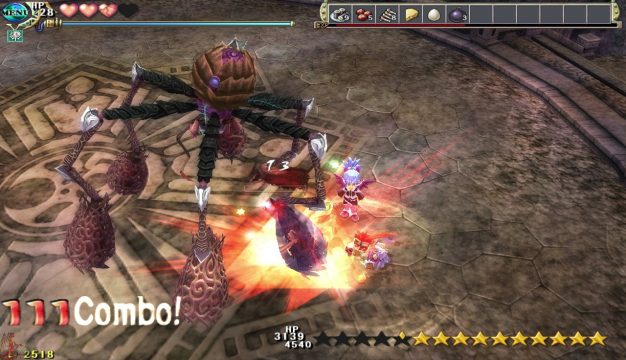 Epic boss fights are a main feature of Zwei.

The gameplay, on the other hand, takes a page from Ys—it’s fast and frenzied with just the right amount of tactics. Zwei means “two” in German, which is the main conceit of the battle system. Players take control of both Ragna and Alwen and can switch between them rapidly. Ragna is a melee fighter capable of dishing out quick combos on foes while Alwen takes care of attacking from a distance with an ever-increasing arsenal of elemental magic. Combat is deceptively simple: one button causes Ragna to attack while another causes Alwen to attack, and they switch out instantly whenever their corresponding button is pushed. Another button allows players to jump/dodge out of the way of attacks or over obstacles while a fourth button is used to unleash special ultimate attacks, though these can be largely ignored throughout the game. Despite the apparent simplicity of the controls, it actually works in the game’s favor thanks to a wide array of enemy attack patterns and large-scale, epic boss battles that require a mixture of dodging, melee, and magic to win. The result is a remarkably satisfying combat system that’s easy to learn and challenging to master. If one were to complain about anything, it would be the camera, which is fixed and annoyingly close to the characters. This can make it hard to see what lies ahead at at times, but it’s easy to adjust to.

Zwei‘s world is divided into a variety of dungeons to explore. While at first glance it seems like a typical maze-style dungeon crawler, the dungeons themselves are more cleverly designed than that. There’s nothing random or procedural in place (with the exception of the late-game optional dungeons), and all of them are filled with carefully placed traps and cleverly designed puzzles, many of which are impressively complex and require some outside-the-box thinking. As the game progresses, new tools will be unlocked that allow players to access areas that were blocked off previously, encouraging fresh exploration of old dungeons. The dungeons themselves are all easy to get to and only take around five to fifteen minutes to traverse and enemies can always be dodged and ignored, so backtracking isn’t a hassle at all. Exploration can reveal fresh treasure and gear, making it well worth the effort.

One of Zwei‘s more unique mechanics is its leveling system. Rathering than rewarding the player with experience points, defeating enemies instead provides cash and, on occasion, food. Food plays double-duty in the game as both the only method of healing, but also the only method of gaining experience. Better quality food provides more experience, and players can trade ten of any particular food for an upgraded version that provides more experience by itself than those ten could put together. Players need to balance eating for health and eating for experience, and it’s a system that works far better than one might expect. 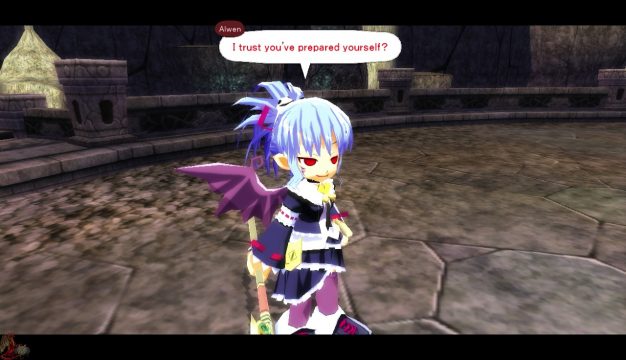 Falcom has become well known for their fantastic soundtracks, and Zwei is no exception. The company’s signature mix of epic rock anthems and bouncy orchestral pieces is on full display and helps to maintain the game’s rapidfire pace. It also features a solid voice cast, though the game isn’t fully voiced throughout.

I didn’t really know what to expect going into Zwei, but for me, the game quickly became the best surprise of 2017. Fun, quick gameplay, cute characters, and a charming story and world all come together to create a terrific experience that hides its nearly ten year old age surprisingly well. It’s not a lengthy game, clocking in at a little over twenty hours, but optional dungeons and a new game plus mode can extend that significantly. While the series doesn’t have the same history as Ys and Trails, after playing through Zwei: The Ilvard Insurrection, I would happily welcome further adventures through Granvallen.