Level-5 has found good success with its cross-media franchises so far, though there’s always been a regional focus to it. Japan is the main target, but Inazuma Eleven received an extended run in Europe, and now Yo-kai Watch is steadily gaining traction on a more international scale. Fortunately, Yo-kai Watch 3’s English release is a bit easier to explain than its Japanese ones. The game initially came to Japan in two versions, Sushi and Tempura, with a third version, Sukiyaki, joining in later on. Rather than dealing with these, the English release simply combines all three versions into one, removing any potential annoyances of certain things potentially not being in one version or the other. In any case, Yo-kai Watch 3 is an enjoyable time, and though targeted at a younger audience, there’s plenty to like for RPGamers of all ages.

Yo-kai Watch 3 begins with the sudden move of regular protagonist Nate, and his yo-kai (spirit) pals Whisper and Jibanyan, as his dad finds a new job. This presents a bit of difficulty as its past localisations set the series in the Japanese-looking but ostensibly American town of Springdale, rather contradicting the entire theme of sending the hero from Japan to America. In the English version of 3, Nate is packed off to the city of St. Peanutsburg in another region called BBQ. The logic doesn’t hold water if thought about for any period of time, but given the sort of shenanigans that happen in Yo-kai Watch in general, it’s something that can be easily overlooked.

Springdale is far from forgotten about, however, as a new hero, Hailey, is on hand to take over there. Hailey is an incredibly excitable and geeky girl living in Springdale who soon comes across a spacesuit-wearing rabbit yo-kai named Usapyon, who is looking for the rocket scientist he used to be friends with. The female protagonist of the previous games, Kate, doesn’t make any canonical appearances, though is present for a couple of sidequests involving parallel worlds and briefly in the post-game. The game flicks back and forth between Nate and Hailey for its first half, with the two investigating their own sets of yo-kai-related mysteries, before the pair come together as the bigger mysteries behind things take over. 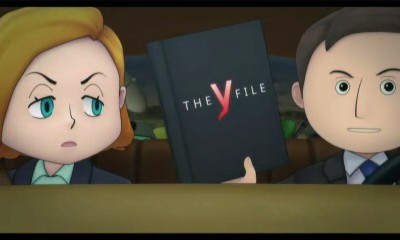 Yo-kai Watch 3 does not do subtlety.

The game goes all-in on its Americanisms, highlighted by Y-File investigating agents Blunder and Folly, as well as the nautical yo-kai Steve Jaws and Mark Orckerberg, who all play fairly important roles in the game’s events. Everyone in BBQ is given a southern US accent — which does a fun job emulating the language issues that play a big role in its opening events — and there’s also the appearance of a Wild West frontier town. It’s all far from subtle, but done in a highly entertaining way. The entertainment factor works across both storylines and regions. Hailey initially grates a bit with her sheer hyperactivity, but it becomes more endearing as the game goes on and works to a nice contrast with her partner Usapyon as well as Nate when the duo finally join forces.

There’s never much attempt to keep things grounded in reality, but Yo-kai Watch 3 still provides plenty of heartening moments. More of these come in the shorter sub-quests than the main story, but there’s plenty of neat touches such as yo-kai overcoming issues or helping others from their past lives. The only complaint to be made is that there is a lot of padding, with the game taking a little over forty hours to complete as players are required to spend plenty of time just running back and forth, or forced to do quests that don’t really have too much to do with anything else. There are also a few times of some annoying progression blocks requiring a specific yo-kai to get past, as well as some side content occasionally getting in the way when it’s not wanted, particularly the Zombie Night and Terror Time stealth missions. There’s a lot of side-content to do outside of the main story and, outside of these, its existence overall will be appreciated by many.

Yo-kai Watch 3 mixes up the combat system from the previous entries in the series by introducing a three-by-three grid on each side of the battle. Players can still have up to three yo-kai active, with another three in reserve ready to swap in, who will do regular actions such as attacking or healing in real-time on their own accord. Players can move their yo-kai around on the grid, which may bestow benefits such as having one yo-kai protecting another or yo-kai backing up each others’ attacks as well as letting them get out of the way of special attacks from the enemy. Yo-kai can become afflicted with status effects, which players can clear up by doing a brief purifying mini-game on the touchscreen such as breaking chains or rubbing away smoke. Similar mini-games are also used to unleash each yo-kai’s special attack, which become available once the yo-kai symbol next to their icon is filled. 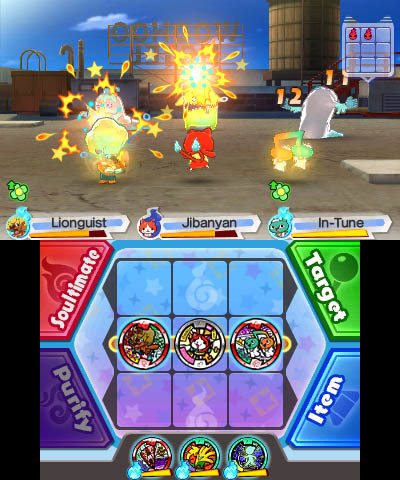 A revamped combat system features two 3×3 grids and makes heavy use of the touchscreen.

Yo-kai Watch 3’s battle system works in some ways but becomes tedious in others. In the majority of regular battles, a balanced party can almost be left to its own devices, making combat a bit tiresome, particularly in those sections where plenty of regular battles come one after the other. However, boss fights are almost always engaging thanks to the need for players to avoid more special attacks or react to the flow of combat. Befriending new yo-kai generally comes from defeating them in combat, but the chances of befriending a yo-kai start out low, so players will often need to fight many uninteresting battles in a row to get a specific yo-kai.

The music in Yo-kai Watch 3 is excellent and incredibly catchy throughout. There are plenty of standout tracks in various areas, from town themes to boss battles, including a boss theme that manages to include a brief interlude in order to allow the boss to partake in an epic drum solo. Only some select lines are fully voiced, but the game doesn’t feel like it is lacking because of it. Everything else uses simple phrases or reaction sounds, which provides a decent semblance to what’s being said. St. Peanutsburg and its surroundings do a great job standing out and contrasting its American architecture and locales with the Japanese ones around Springdale. The total number of yo-kai in 3 comes to over 500, and there are lots of fun designs to behold, and all the combat animations are well done.

Yo-kai Watch 3 will offer most RPGamers plenty of hours of fun. The game makes good use of the 3DS’s dual-screen in its final entry on the system with Yo-kai Watch 4 already confirmed as a Switch title. There are some annoyances, mostly related to a bit of unnecessary padding and a few potential roadblocks, and there’s a bit of sense of quantity over quality in some of its side content, but its general upbeat attitude towards everything is very welcome and on the whole successful.