After a few years of the series lying fallow, western fans of the Dragon of Dojima have reaped a bountiful harvest of Yakuza games the past two years: a prequel to the series, a remake of the first game, and the culmination of Kiryu’s story. Now, this amazing run ends with a remake of the second PlayStation 2 game, Yakuza Kiwami 2. As someone who jumped into the series in the PlayStation 3 era, I’ve been looking forward to playing this highly regarded game for years. Thankfully, this remake of a game originally released in 2006 in Japan has managed to exceed my lofty expectations with the best, most cohesive story in the series to date while using a graphics engine that really beings the locales to life.

Kiwami 2 starts out one year after the events of the first Yakuza game. After becoming the fourth chairman of the Tojo Clan and solving the ten-billion-yen incident, Kiryu Kazama has left the yakuza behind as he attempts to build a normal life raising his adoptive daughter Haruka. However, things aren’t going well in the Dragon of Dojima’s old stomping grounds. The leadership of the Tojo Clan was rocked by Kiryu’s punch-heavy methods of problem-solving, leaving the clan weak and riddled with internal discord. Now the rival Omi Alliance has allied with a Korean mafia group to stir up trouble in Kamurocho. Amidst this delicate situation, an assassination occurs and now Kiryu must travel to Sotenbori, Osaka to try to prevent an all-out war between the Tojo and the Omi Alliance.

The narrative in Kiwami 2 is the strongest and most cohesive in the Yakuza series and the events tie in tightly to the first game. Thankfully for players that haven’t played its predecessor or just need a refresher, there is an extensive optional review of Yakuza Kiwami, as many of the events and characters will play a prominent role in the sequel. It’s interesting to see a character forced to deal with the consequences of actions from a previous story, and the knowledge that everything doesn’t just magically work out heightens the tension in this game. 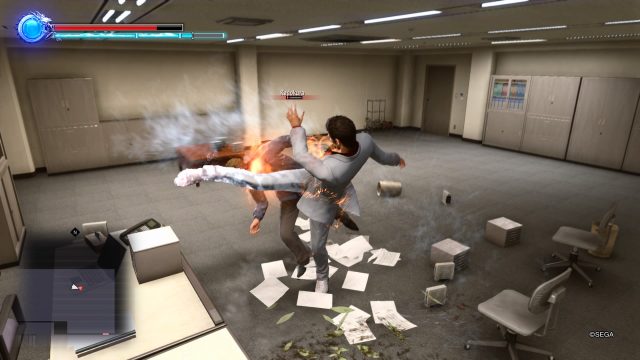 The supporting cast is also strong. Ryuji Goda, the Dragon of Kansai, makes for an entertaining antagonist. He’s determined to use any means necessary to start a war between the Omi Alliance and the Tojo Clan with the explicit goal of having a showdown with Kiryu, because he wants to be the only dragon in Japan. Makoto Date is back to act as Kiryu’s go-between with the police and generally be the goodnatured right-hand guy who isn’t that good in a fight. But Date isn’t the only police sidekick for Kiryu; he is also joined by Kaoru Sayama, an Osaka organized crime detective who places Kiryu under the most ineffective form of protective custody ever seen. She has a dark past that is tied to the Tojo Clan and Kiryu is her ticket to uncovering it, even though it might be better left buried. The relationship that develops between the two is thoughtful and touching and it’s a shame that Kaoru is basically forgotten after this game as she makes an interesting romantic interest for Kiryu.

Unsurprisingly for a remake in a long-running series, the method of storytelling hasn’t changed. Expect some lengthy cinematics for conveying much of the plot. Nonetheless, Kiwami 2 has excellent pacing and the story is incredibly compelling, but players who loathe lengthy cutscenes should be aware of what’s in store.

Of course, the game isn’t all cutscenes. Yakuza is a 3D-brawler at heart and Kiwami 2 carries on the series’ tradition of being one of the best brawlers around. The action is fast-paced, involving a variety of light and heavy attacks as well as blocks and dodges to beat a path through the thugs and yakuza of Japan. What has always set Yakuza apart is the ability to use parts of the environment — such as bikes, signs, or traffic cones — to beat enemies into submission as well as building up a gauge to pull off Heat actions which are over-the-top finishing moves. Once mastered, it’s incredibly satisfying to take down a group of hooligans, deftly dodging their attacks as Kiryu picks up a hotel sign to bash the lot of them with. There’s no longer lengthy transitions between exploration and battles, and fights can spill over into buildings with destructible environments to throw yakuza into, much to the consternation of konbini clerks left to clean Kiryu’s mess.

The ability to store and use weapons at will has returned after a one-game hiatus and now there are location-based heat actions where NPCs, befriended through sidequests, will lend Kiryu items he can use to subdue his foes. Sometimes the items loaned by NPCs are somewhat sensible, like a guitar, and sometimes they are just silly, like a restaurateur tossing some leeks. It’s an odd treat to defeat an enemy with a vegetable. This is par for the course in Yakuza, a series that balances a serious main narrative with silliness on the periphery, and Kiwami 2 strikes that balance perfectly. 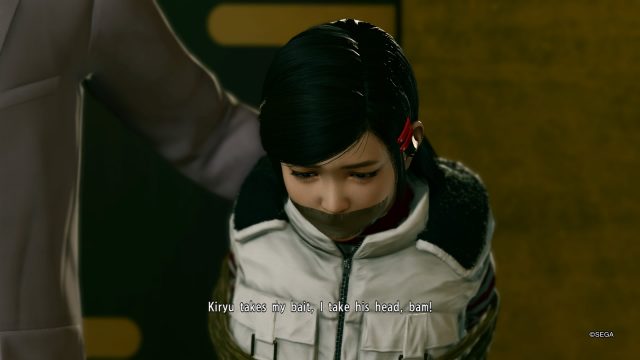 Is it a Yakuza game if Haruka isn’t kidnapped?

Kiwami 2 is made using the same engine as Yakuza 6 so experience progression will be familiar to series fans. The game gives experience in different categories not just for beating up random hooligans, but almost everything players do in the game. Experience can be spent on better stats for Kiryu, unlocking new heat actions, or other abilities that help in-game such as flagging potential side stories on the map. It’s a smart system encouraging players to dabble in all the different options on offer. With two different fictionalized recreations of entertainment districts to explore there are plenty of things to occupy Kiryu’s downtime. It’s an interesting mix of Sega arcades that feature older games such as Virtua Fighter 2, managing a hostess club, defending Majima’s construction site from waves of thugs via a top-down RTS game, or maybe just relaxing with a few drinks and some darts at the local bar. It doesn’t have quite the variety of some of the other titles in the series, but there are still so many options that players will find something to pique their interest.

The graphics in Kiwami 2 are most impressive. The districts of Kamurocho and Sotenbori pop off the screen and are stunning, especially at night when the towns are lit up. The rich detail helps create an incredible sense of immersion that makes the player feel like a virtual tourist. There are also cutscenes, especially during fights, where the graphical fidelity ramps up considerably. The vivid detail of the full-back tattoos of the yakuza or the sweat flying off and glinting in the light as foes do battle heighten the action.

The music is more difficult to evaluate. As an open-world game, the soundtrack often takes a back seat to the vibrant noise and bustle of these busy urban environments. While the music isn’t particularly memorable, it accompanies the scenes well and the battle themes that kick in when a thug is foolish enough to pick a fight with Kiryu are fun, energetic tunes that complement the combat and never get old no matter how many random encounters occur. 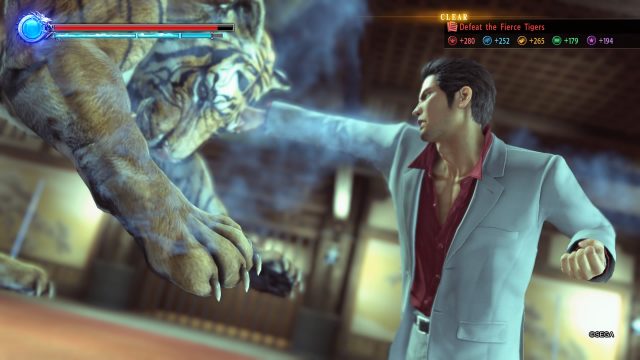 Hand-to-paw combat with a tiger!

However, the voice acting is a big part of what makes the Yakuza games special and Kiwami 2 is no different. Once again, there is only Japanese voice acting accompanied by English subtitles, but the voice acting is exceptional and it adds to the setting since the game takes place in Japan. The performances by Takaya Kuroda and Masami Iwasaki give Kiryu and Ryuji Goda gravitas that sells the conflict between the two. The inflection that Majima has when he says “Kiryu-chan” immediately elucidates how dangerous and borderline crazy the Mad Dog of Shimano can be. Having two grown men screaming incoherently at one another could be a disaster if done wrong, but the Kiwami 2 cast pulls it off with aplomb, heightening the tension in important fights.

New to this version of Yakuza 2 is an added Majima side story. Despite connecting Majima’s story between Kiwami and Kiwami 2, as well as providing a tie-in for fans of Yakuza 0, it’s ultimately underwhelming. The story is not integrated into the game itself — it must be accessed from the title screen — and it’s unlocked piecemeal as players complete the main game. Without any typical progression system, it stands alone as a two-hour fanservice vignette. It might have worked better as an optional prologue for series veterans, but it comes as a letdown if played after the ending of Kiwami 2 proper.

But not even a tacked-on vignette can detract from the incredible job Sega has done remaking Yakuza 2. This game excels because it’s not trying to juggle multiple characters and plotlines, instead focusing on one compelling story and doing a masterful job in telling it. Kiwami 2 nails the balance between the serious crime drama at the core surrounded by lighthearted side stories and generally entertaining silliness. It has incredibly well done and memorable scenes: the final fight with Goda and defeating a yakuza’s pet tigers by punching them are ones I’ll never forget. Simply put, Kiwami 2 is the new pinnacle for the series and any RPGamers with a passing interest in brawlers or wanting to make a virtual visit to Japan should seek it out.