What is Love? Don’t Hurt Me. No More…

WitchSpring is a popular mobile RPG series developed in Korea. It features adorable witches getting into shenanigans, and often wrestling with choices. Each game looks at witches and their relationship to monsters and humans as common themes. Co-developed by Kiwi Walks and developer Ikina Games, WitchSpring3 Re:Fine: The Story of Eirudy is the first entry in the series to be ported to the Nintendo Switch. While it was a noble effort to port the game to consoles, the transition is rough around the edges and makes for an uncomfortable playing experience.

Eirudy is a marionette witch who keeps her presence hidden in the Misty Forest. With the ability to bring puppets to life, Eirudy goes out to gather ingredients for crafting and meets a wild boar whose energy she wishes to steal. In order for her creations to come to life, she must zap living creatures of their vitality. She also meets Adrian, a young nobleman whose mother is in a coma, and he is searching for a way to wake her up. When he gets attacked in the Misty Cave, Eirudy saves his life, and the two become friends. As their friendship blossoms, players learn Adrian’s father is taxing the villages and harnessing the power of the Dragon Nest, which allows him to control dragons… for some reason. Adrian’s father also hates witches and wants them to die…also for an unexplained reason.

For a game that can be completed in under nine hours, the story is a disaster, to say the least. It feels like WitchSpring3 was trying to cram in as many story beats as possible, without making them feel natural or cohesive. Character motivations throughout the story are hollow, and a lot of Eirudy’s story is focused on her love for Adrian, which she doesn’t fully understand (which is fine). Regal, Adrian’s father’s, has a weird obsession with being the most cartoony villain ever who has stupid motivations that are literally “I need all of the power because power.” Nothing in this game’s story is compelling, and even though the game offers different pathways to change the story, most of the choices never feel rewarding either. 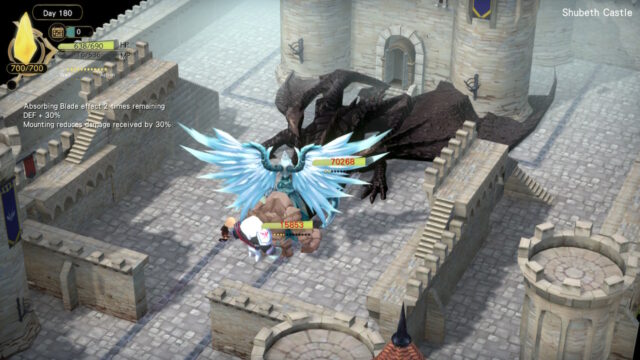 Everyone is on top of each other and I don’t know why.

It doesn’t help that the game’s translation reads so stiffly. A lot of the dialogue doesn’t feel natural, and even reading it aloud, doesn’t make a lot of sense at times. There are so many instances of awkward sentences throughout the game that the text comes across as uncomfortable to read. A perfect example of this is that anytime players complete a battle, they are greeted with “Combat performanc.” Literally, no care was put into how the text reads, and it’s a shame because, in the hands of a talented localizer, the story could have gotten some personality.

Even more frustrating outside the story beats, is the fact that the game is so poorly optimized for the Switch. The controls in the game feel messy, as Eirudy jerks across the screen with a minor touch of the controller, or inside her house the controls will try to force the player to slingshot between the different focal points, making it difficult to even select the task the player wants to perform. The number of times the game would move me from the Diary at the top of Eirudy’s house to the basement where the marionettes were stored when I didn’t want to go there, happened more frequently than I wanted to deal with.  Even opening menus feels like a chore, as the player will have to click through multiple screens just to read an item’s description. While that makes sense with a mobile game, it doesn’t work with the game being ported to the Switch where the screen real estate is much larger in scope. 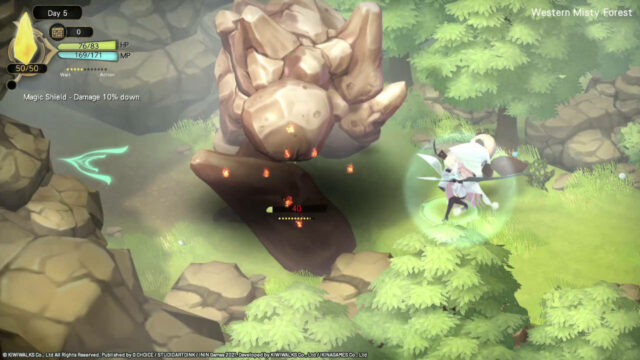 Even the combat system feels clunky at times, as it’s clear the game was not optimized for the Switch correctly. Large-scale enemies create massive lag during battles, or all the characters and enemies are clipping into each other. This is a shame because the combat on paper isn’t half-bad, and it just needed a correct optimization. The combat system is turn-based, in which Euridy can summon marionettes that she has woken up from her workshop. Eirudy can summon up to three puppets to assist her in battle, each with unique skills such as the ability to absorb enemy health points or buff Eirudy throughout the battle. Eirudy also has magic and sword skills in her arsenal to fight off enemies, and many of the skills work in tandem. For example, Eirudy can cast a spell onto her sword to create a magical effect that lasts for a few turns. Any vitality Eriudy has collected can be used to replenish her health and magic points. Even if the player dies, vitality can be used to automatically resurrect the player. There are some good ideas here that are plagued by the fact that the combat is slow and that there is too much on the screen at once for the game to handle.

While the graphics are a huge upgrade from the mobile version, they are still hard to praise. There are beautiful pieces of artwork throughout the game’s cutscenes that are stunning to look at, and definitely help bring to life some of the story elements. The gameplay graphics are serviceable, but they don’t stand out as anything special, and the visual experience is weighed down by the amount of graphical clipping throughout. The soundtrack in WitchSpring3: Re:Fine is lovely to listen to, offering a lot of pleasant and whimsical notes but is not enough to elevate or improve the overall experience.

What’s hard about WitchSpring3 is that there is so little in it that is enjoyable. There is no personality in the game, and everything that is happening in the story or the gameplay feels so unremarkable. I appreciate how short an experience it was and that it was very direct in its approach, but there was so little in it to explore and engage with. This is a hard game to recommend as it can be welcoming for some gamers, but this port feels as though very little effort was put forth. WitchSpring3: Re:Fine is a boring and hollow experience that cannot be recommended at a $39.99 price point.