Werewolves of the Pacific Northwest

The World of Darkness is a fascinating RPG setting, ripe with interesting stories to tell in a modern fantasy setting with a tinge of horror. Werewolves fighting off an evil corporation commiting6 deforestation and human experimentation is a perfectly good story to tell. It stands to reason that Werewolf: The Apocalypse – Earthblood should make for a reasonably compelling entry in the genre. But Earthblood unfortunately never raises itself above average, ending up as a thoroughly competent beat-’em-up bogged down in less stellar stealth gameplay and rough RPG elements.

In the world of Werewolf, there are three god-like beings: the Wyld, the Weaver, and the Wyrm. The three are meant to be in balance, but with humanity’s increasing technological advancement and consumption of nature, the Wyrm has been gaining in strength and causing corruption. Enter Cahal, a werewolf and generic ’00s action hero who returns to his pack after five years of self-imposed exile in order to aid them in their fight against Endron, a corporation invading their forest and building facilities dedicated to human experimentation. By repelling Endron, the pack hopes to restore the power of the spirits of the forest. 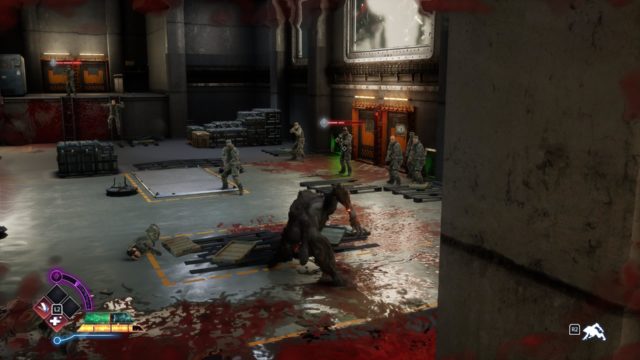 Werewolf’s combat leaves the level soaked in plenty of blood.

It’s a basic premise but the actual presentation leaves a lot to be desired. Earthblood is a very short game, which creates pacing problems. Most characters get introduced, elaborated on for a scene, and then find their arcs finished shortly thereafter. Very little time is given to setting up conflicts and they’re resolved just as easily. The cutscenes themselves feel as though they came from the PS2 era, with dialogue delivered plainly and staged equally so. None of the acting stands out in any way, and Cahal in particular is stuck in delivering his lines in a gruff manner that sounds like it came out of the protagonist of an early Xbox 360 game. Major plot points and developments never quite feel their weight, with events playing out in a rushed manner that leaves little time to breathe. The direction actually becomes unintentionally humorous at times, with cutscenes being far from the only examples.

As a werewolf, Cahal has the ability to transform between three forms: his standard human form known as Homid, a traditional wolf called Lupus, and the large, bestial Crinos. Most of the game is spent in Homid form with the ability to transform into Lupus form at the push of a button, a welcome feature that never gets old. The two have significant tradeoffs: Lupus form is faster and harder to detect, but Homid form is required to interact with other characters and most environmental things, such as computers and door locks. These are also the two forms in which stealth is utilized, which is perhaps the weakest element of the game. The tools given to the player and the obstacles encountered are all basic and the layout of the maps makes clearing enemies easy. Even without defeating them, enemies are easily circumvented and the addition of a crossbow, which can take care of both enemies and cameras from a distance, ends up trivializing most of the encounters. Most damning may be that stealth plays out exactly the same way in hour one as hour ten, with the exception of a few higher-level enemies that can’t be taken out quietly. The upside of stealth is that failing it automatically triggers the best part of the game: combat.

It’s here where the Crinos form rears its massive head. Upon being discovered, or whenever the player voluntarily lets themselves get discovered, Cahal transforms into a giant beast that lays waste to everyone in the room. It feels as though a lot of the attention was given to the game’s combat, and while it isn’t the most precise or in-depth example in the genre, it is rather fun. The Crinos actually feels like a powerful force as it plows through most of the game’s enemies. Even more resilient enemies can usually be taken down by a special ability or two. While playing as the Crinos, Cahal can swap between an agile form and a heavier form, each with its own abilities. The agile form attacks faster and can nimbly cross the arenas, but heavier form takes far less damage while dishing out more. Special attacks cost rage, which is built up by dealing damage. Dealing damage also increases the Frenzy meter that activates a temporary power-up state increasing damage and speed but disabling the use of special abilities. Health is also entirely restored between encounters so it’s difficult to get stuck. All these things in conjunction mean the combat is never difficult, but it is nonetheless satisfying. 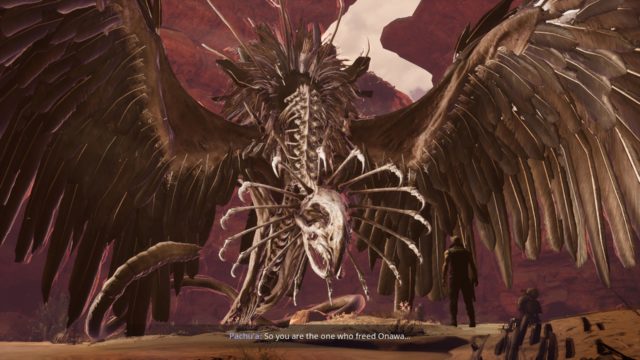 Occasionally Cahal will run into some pretty out-there creatures.

Outside of combat Earthblood feels very artificial. The game’s hubs are all very small, which isn’t a problem in and of itself, but when multiple of Endron’s compounds are no more than a short walk away from the presumably hidden base of operations, it raises the question how they weren’t found sooner. Levels also rarely feel like more than a series of combat encounters, enhanced by the fact that each room is entirely separated from the rest of the stage. Cahal can walk into an area, defeat every enemy in there in the loudest method possible, and the people in the next room are none the wiser. The segmented nature of the encounters and odd level layouts give the impression that a PlayStation 2 game traveled through time and got a significant facelift.

The game has minimal sidequests that can be easily completed by just exploring the surrounding area, but in general they are worth doing as they provide spirit points, the game’s experience. Gaining experience is one of the game’s few distinct gameplay aspects. Most combat encounters will not provide spirit points; only major encounters, quests, and hidden spirits around the map provide experience. This does provide a worthwhile reason to explore the maps to their fullest as doing so awards the most experience. However, actually spending experience points is a bit disappointing. The abilities are powerful and worthwhile, but spirit points are so liberally doled out throughout the game that most of them will be unlocked by the end. It’s not a matter of what you choose, just when you choose it. While it’s nice the game prevents stealth or combat being more rewarding than the other, those looking for a meaty RPG won’t find one here.

To Earthblood‘s credit, there are attempts made at more ambitious mechanics. In certain areas Cahal can blend in with the crowd in Homid form while the Lupus form quickly gets discovered, but the downsides of being in Homid form don’t add interesting wrinkles to these scenarios. Certain conversations provide a gameplay effect from dialogue choices made by the player as particular answers can raise Cahal’s rage, which actually carries over to the next combat encounter, and possibly trigger Crinos form at an inopportune time. But these cases are rare and one can go an entire playthrough without triggering them. These same conversations do give the option to give into rage whenever and just fight everyone, which is both fun and funny. 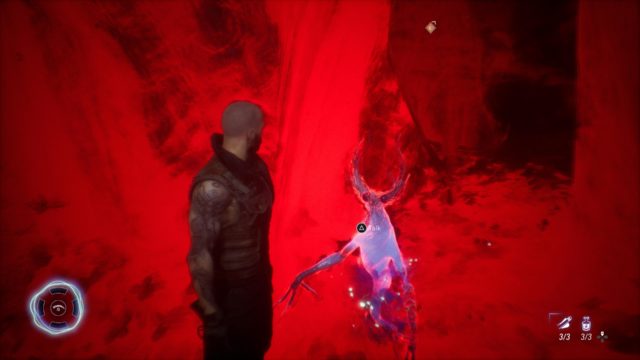 Cahal’s Penumbra Vision lets him find and communicate with spirits.

While not one of the better-looking games out there, the designs of the werewolves and monsters are pretty cool. Perhaps aided by its visual simplicity, the game also looks very clean, clearly imparting important information without cluttering up the screen. The game’s music is a collection of heavy metal tracks that leave little lasting impact but do feel appropriate during the combat sections. It’s also an incredibly short game, 15 hours tops, which may play into some of its pacing issues, but prevents it from overstaying its welcome.

Despite its B-game charms, it is difficult to recommend Werewolf: The Apocalypse – Earthblood outright. Many of its elements feel somewhat incomplete or lacking. Even the competency of the combat only works on a surface level and is unlikely to keep people coming back for more. Still, there is some joy to be had here, even if some of it is unintentional. There may not be a gripping story or numerous engaging gameplay systems, but with the right state of mind there’s a decent, mindless weekend brawl to be had.