Let Us Resist Together

World War II has been used multiple times as the setting for stories in all kinds of media. Video games are no exception, with many first- and third-person shooters and strategy titles taking place during the six-year conflict between the Axis and the Allies. Developer Pixelated Milk carves its own niche in two ways with Warsaw, providing a turn-based tactical roguelike focusing on a lesser-known chapter of the war, the Warsaw Uprising.

August 1, 1944. The Polish Home Army, an underground resistance movement, retaliates against the German occupation by starting an uprising in Warsaw, the capital of Poland. Players are asked to take charge of the liberation effort by managing supplies and trying to ensure that resistance members return safely from their missions. Being the leader comes with many things to keep in mind: each of the six districts of the city comes with its own morale and attrition bars, and if either the first depletes or the second reaches a certain threshold, the given district will surrender to the enemy. The different territories’ statuses affects the uprising’s momentum, which starts from 100% and alters based on game events, but if it reaches zero before the real-life conclusion of the uprising, it’s game over. The player’s main goal then is to keep these measures as high as possible by succesfully completing the resistance’s missions.

A maximum of four party members can be deployed in these assignments, whose objectives range from eliminating a set number of enemy forces in an area to retrieving supply crates or setting new barricades. Each playthrough starts with three heroes, units that can gain experience points and be upgraded, and one generic recruit that has a set amount of skills and cannot grow further. After assembling the party and assigning starting resources like ammunition and healing kits, players have to navigate a top-down map of Warsaw’s districts, with a piano and the sound of distant gunfire explosions acting as the sole audio companions. Movement requires Action Points (AP) and running out of them will render the mission a failure, meaning a loss of morale and higher attrition. 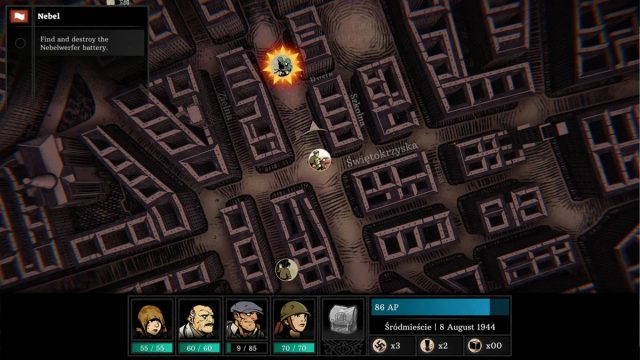 Action Points dictate how much players can move around the map, so clearing the main objectives takes precedence.

Three different types of encounters are hidden on every map, but become visible once the party gets close enough. Supply crates can be opened to recover items like compasses, which reduce AP loss, or flares that uncover nearby encounters while staying at a distance. Events are brief text-based adventures that offer multiple choices that can be undertaken with one of the party’s characters. These often require a skill check to decide whether the result will be a success, granting extra experience points or supplies, or a failure, leading to a loss of uprising momentum or in the most extreme case the death of a teammate. Lastly there are enemy troops, which can be fought by approching them or by being spotted when inside their red area of sight.

During combat the player’s party members are placed on a two-by-four grid, for a total of eight available spots, and the same applies to the opposing Nazi forces. Activation Points are spent in turn to move, wait, perform a melee attack, or use a skill. The latter spends both ammunition and stamina, a resource that maxes at three for every unit, with one point being restored at the beginning of every turn. This means that during a turn the same character can act more than once, but to balance this there are downsides to low amounts of stamina, such as lower accuracy and increased damage received. Many skills have position requirements, like machine gun volleys asking the firing party member to stand at the back, and may also offer a limited amount of spots on the enemy field as targets. The positioning of units on both sides then becomes crucial to emerge victorious from battles since it affects many of the game’s mechanics.

Hitting an enemy that sits on the opposite row grants a more damaging flanking attack, certain characters can set up barricades that can bear the brunt of enemy attacks when a unit is behind them, and some skills can push or pull foes from their starting positions along with making them switch rows, in order to line them up and fully capitalize on both AoE attacks and the flanking bonus. The same can be done by foes, however, which can disrupt the player’s tactics and positioning to better whittle away at the resistance members’ HP, something that should be avoided since perma-death is a feature of the game. If the player cannot hold  situation looks too unfavorable, a retreat option is available anytime during combat that allows teammates to live to fight another day at the cost of the mission’s success. 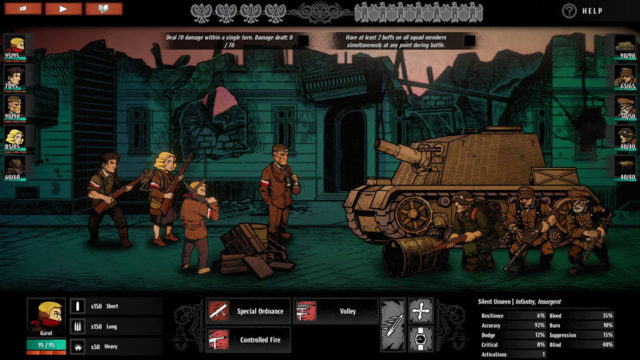 As the game progresses, the Nazi forces will employ more and more heavy units.

The game’s presentation is most effective during the combat stage: the camera zooms in on the units involved in any given action while the crunching sounds of bullets being fired and hitting their mark add more weight to every battle. The gritty 2D portraits for characters and environments are a great fit for the conflict and the same applies to the different battle themes: they aren’t loud and triumphant fanfares that want to amp up the player, but rather somber piano melodies that are aware of the desperate circumstances of the uprising, with drums and percussion being employed to heighten the tension.

Missions take a number of in-game days, and after their completion or failure the player is shown a recap screen of the uprising’s status showing the resources gained and morale lost. This is also where major events that shake up the playthrough’s flow take place: an unexpected bombing may increase the attrition of some districts, a problem in the resistance’s ranks may require a critical decision, or a new hero may join the uprising’s cause.

After the event is resolved, it’s time to go back to the hideout. Here players can assess the situation while listening to vintage radio music and spend supplies to improve the districts’ morale, but also check on the resistance members to change their equipment and use the experience acquired on the battlefield to acquire new skills. A codex containing information about enemies and allies can also be accessed, which also acts as the only way to know more about the resistance’s members, even though it is restricted to backgrounds, likes, and dislikes as well as brief paragraphs of personal experiences. That is all the heroes get in the way of characterization, and it is a pity that the only resource to get to know them better is hidden in a sub-menu rather than being uncovered through the course of gameplay. After everything is taken care of, a new mission can be selected from a pool of three and the gameplay loop resumes. 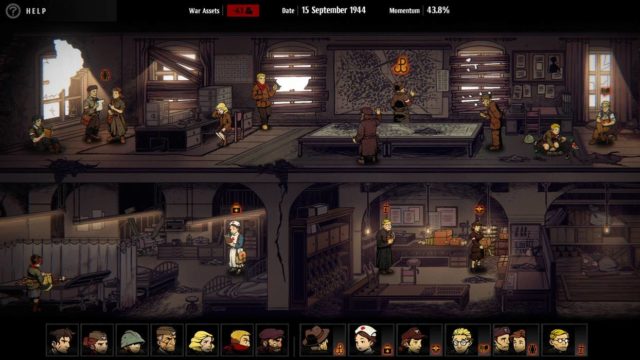 Heroes in the hideout show a bit of much-needed character through their portraits.

Warsaw ends up as a game of managing resources, and scarce ones at that. There’s a lot to monitor and take care of, and choosing to stock up on one kind of asset usualy means letting go of another or risking the party members’ safety. The odds are openly against the player: a counter shows how many citizens are left in the city, with the number being slashed day after day; the already dwindling supplies have multiple uses between stocking up on items, repairing weapons, and keeping the districts’ morale high enough; using the same party members too often to repel enemy forces means deploying them at reduced health during subsequent missions, something that exerts its pressure especially during the initial days of the resistance, where only a few party members are available; even the loading screen features one of the city’s buildings getting more and more beaten up by enemy bombardments. The game is brutal, but asks to persist in spite of it all and to make the most out of the cards at their disposal, and it does not shy away from slowly removing them as a playthrough progresses.

Four difficulty modes are available to fine-tune the experience, but the punishing nature of the game is exacerbated in any case by the many bugs that hamper the experience. It is not uncommon to access one of the heroes’ status displays only to be met with a black screen, to navigate the mission’s map and having an encounter not show up even though the party should be right next to it, or to come back from a mission and be stuck in the recap screen with no other option but to shut the game down and restart it. The automatic saves do help and make sure that progress is not lost most of the time, but these incidents happen too frequently to be ignored.

Warsaw may be a diamond in the rough for some: its nuanced battle system together with the tough resource management are the highlights of the experience, but some may be put off by the high difficulty that can be tempered with both experience in the game’s mechanics and a sprinkling of luck. A good number of playthroughs may be required before reaching the end succesfully, though each lasts less than ten hours. The game tries to walk a fine line between frustration and being coherent with the story of loss, sorrow, and resistance at all costs that it wants to tell, but the former seems to take over most of the time since the narrative doesn’t have many chances to shine, exacerbating the sting of recurring bugs. As it stands, this port has visible kinks that need to be ironed out, and a few patches could do wonders for making the experience less punishing than it already is.