Voice of Cards: The Beasts of Burden Review

Less than a year after the first Voice of Cards game, and six months after the second, Square Enix has unleashed Voice of Cards: The Beasts of Burden. Using the same structure of a world represented through the medium of cards as previous titles, this third game adds some new ideas that unfortunately don’t have enough time to mature, and in the end it’s done nothing more than create a serviceable turn-based RPG that is short and easy, whilst at times being at odds with itself.

Voice of Cards: The Beasts of Burden follows the story of Al’e, a young girl who lives with her mother in a series of underground caverns who dreams of seeing the night sky and what life above ground might be like. Shortly after her fourteenth birthday, the village they live in is beset by monsters and Al’e is the only survivor. Fuelled by revenge and the knowledge she gains from a boy from the outside world who saved her, Al’e goes above ground to seek those who have wronged her, only to discover she has a special power: the ability to capture monsters in cards, then use each to her own ends.

Al’e and her friends search for answers to questions that haunt each of them and drive them throughout, and each of the four party members has hidden truths about what set them on the road of adventure. Unfortunately, these reasons are not really explored for more than a few sentences of dialogue and in the brief backstories, which can be found in card collection menu but are locked until much later in the game when each of them reaches some kind of closure to their quest. There are some interesting themes in the writing, but the pacing of the plot prohibits them from being really explored and can be seen coming, apart from the final chapter, which holds easily the most interesting twists the game has to offer. 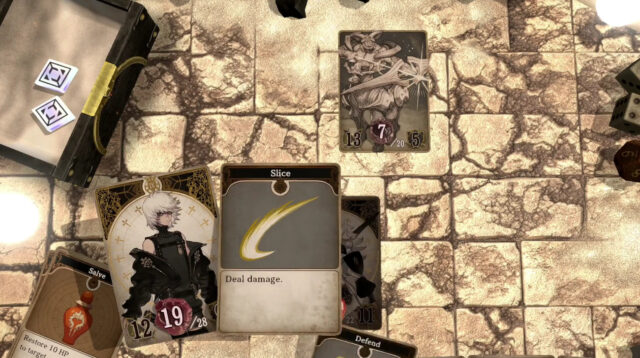 An example of early-game combat

Al’e uses her power to fight the monsters, joined by the friends she makes along the way, in straightforward turn-based combat, with each side facing off against the other in the form of cards. Each character is wonderfully represented with the series’ signature artwork, each card indicating that character’s health, attack, and defence. The values determine the damage taken by their various abilities, while a separate speed stat determines who acts when. Normal actions like regular attacks and defending are available to every character, but each can use Al’e’s card-capturing ability to augment their own skills and add new ones to their arsenal. This ability is the main differing mechanic over the previous Voice of Cards titles, and smartly allows the player to customise their attacks and skills to match any situation that may arise, be it a healing spell or a debuff that can intimidate an enemy into lowering its defence.

Every monster that Al’e and her party defeats is able to become part of their ‘deck’, including some of the Primal boss characters that offer the most powerful area-of-effect and debuff skills. Gemstones are the currency by which skills are balanced, meaning that a basic attack skill requires only one gemstone to cast, but the Primal skills, which are the strongest attacks in the game, need the most. A single gemstone is automatically granted every turn, but certain abilities can conjure more.

The problem with this mechanic, and the ease of the game’s combat in general, can be found in its grading system. Each skill, not including Primals, is graded, with a higher rating meaning higher damage or effectiveness, or a reduction in gemstone cost. These grades are left up to chance and have a major impact on the game’s balance; for example, it is possible to receive a three-star Wasp skill that costs one gemstone to cast early on in the game, and this card is more cost-effective and potent than many base-rated skills acquired later on. This easily leads to situations where players can simply use the same cards over and over, rather than being encouraged to try out new spells. Though the game is relatively short, conquered in under twenty hours, combat can quickly become a routine. 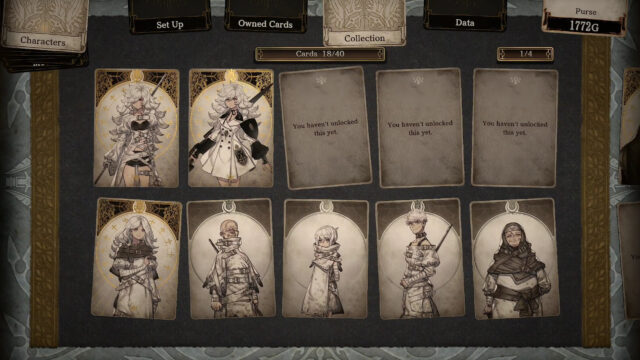 Voice of Cards: The Beasts of Burden features some gorgeous character art

That’s not to say there isn’t enjoyment to be found in The Beasts of Burden’s combat. Each of the monsters and characters are gloriously drawn in exquisite artwork as they move around in their card forms, cartwheeling and turning to indicate the actions taken to perform each skill. These skills have sharp, nice-lookings effects that indicate buffs and debuffs, such as ice attacks freezing opponent cards, and instantly tell the player what’s happening. The various bosses that Al’e faces are well designed too, with many of them being constructed by many cards piled together to give a sense of the scale of the monster not found on normal enemies.

One area that has stood out across the Voice of Cards series is the sound design and music. The Beasts of Burden is no different, with excellent sound effects for each action and attack performed, whether it’s the simple tapping of Al’e’s marker moving around the board or a dragon roaring as it breathes fire across the battlefield. All are wondrously recreated in waveform to draw the player into the game’s world. The music is always excellent and its moods are easy to understand and follow. Each of the locations has specific themes that range from jolly bar ditties to lonely, longing, dark pieces that succeed in portraying the hopelessness the characters feel from that section of the plot.

The series’ card-based maps and narration return as the game’s primary means of exploration and storytelling. As in previous titles, its world is made up of individual cards, with players moving around one step at a time to reveal what is past the fog of war. Each step reveals any unflipped cards adjacent to the player, with hidden chests and NPCs found through careful searching. This leads to a very compelling gameplay loop of checking every nook and cranny around every map, as doing so leads to worthwhile rewards. Guiding the player through the quest in The Beasts of Burden is the narrator, voiced in this game by Carin Gilfry, who expertly reads all of the interstitial text of the story, taking a Game Master role in explaining what’s happening when the in-game cards aren’t expressive enough to portray it. The narrator is also tasked with reading dialogue to the player, with notable silences using the disconnect to draw attention to things that may be important. However, the fast-paced nature of the plot means that such cases come up frequently enough to lose impact. 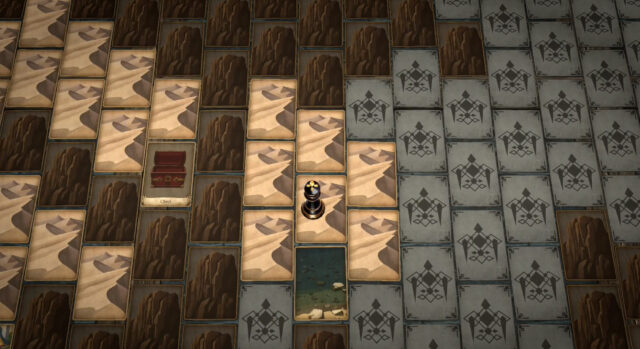 The overworld, filled with upturned cards to explore

There are some sections that provide welcome changes to the general gameplay mechanics. One example has Al’e and her friends tasked with constructing a bridge to continue on their journey, using pieces of metal found throughout the map to connect sections in the correct order and reach the other side. However, they all end far too quickly and are too simple to stick in the memory or to feel of major consequence to the player.

Overall, Voice of Cards: The Beasts of Burden is a similar experience to previous titles. The great artwork and music offer strong groundwork and there are signs of revision taking place, with new mechanics doing some work to differentiate the experience, but they are under-baked and the straightforward gameplay doesn’t offer much excitement. Ultimately, the game works best taken as a chill switching-off experience, but doesn’t do enough to stick long in the memory.

RPGamer Streamer/Staffer. Fan of Strategy RPG's, and all turn-based games in general. Action is for Bro's. Let me use my brain to win!