Love in the Time of Midgard

There’s something to be said about having to objectively review your all-time favourite game. You know it and all of its inner workings backwards and forwards, and all of its inner workings, which makes it difficult to see flaws in it. Square Enix decided to re-release Valkyrie Profile: Lenneth as a bonus item for anyone who bought Valkyrie Elysium, and when I heard this, I was overjoyed. Having now replayed the game after years apart, I can say, with certainty, that the memories do it justice and it is still my favourite JRPG of all time, despite some flaws. While some elements have not aged well, Valkyrie Profile offers phenomenal storytelling at its finest.

In the opening moments of the game, players are introduced to two young lovers, Lucian and Platina. When Lucian finds out that Platina’s parents planned to sell her into slavery, he decides that they must run away from the village in order to be together. Although they leave together, the plan fails when they reach the Weeping Lily Meadow, where Platina dies in Lucian’s arms after inhaling toxic pollen. Platina is then reborn as Lenneth Valkyrie, chooser of the slain, who serves the mighty Odin as a defender of Asgard. With a war brewing with the Vanier, Odin tasks Lenneth with collecting human souls, termed Einherjar, that will fight on behalf of the Aesir army.

What makes Valkyrie Profile special is how it tells its story. During each chapter, Lenneth can use her Soul Concentration ability to hear human souls on the verge of death. There are up to twenty-four characters to recruit, and each one has a unique tale to tell, full of heartbreak, sorrow, and hope. From a mermaid who wishes to be reunited with her family to a young boy who is sent away from his lady love to go to war, each story offers tragic and heartfelt moments. Furthermore, Lenneth’s own narrative of becoming the valkyrie and having her memories sealed away is equally as impactful, and her transformation throughout the game is as powerful as it is difficult to watch. 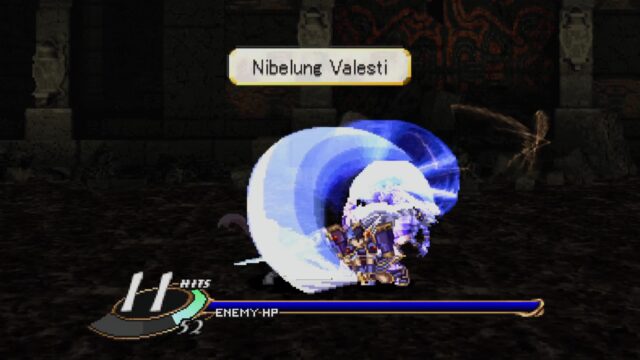 It shall be engraved upon your soul!

Storytelling is where Valkyrie Profile shines the brightest, and the game’s writing is fantastic. The localization does a fabulous job of bringing all the characters to life and giving players the emotional connection necessary to appreciate what is happening throughout. It also helps that the voice acting is decent, especially with Megan Hollingshed providing the voice of dutiful Lenneth. Her portrayal of Lenneth is stellar, as she does a fantastic job of showcasing Lenneth’s growth in the story. While not every character’s voice fits perfectly, it’s important to remember that this game was originally released in 2000 and the voice acting was not updated in this port.

Valkyrie Profile has eight chapters for players to explore. The main components of gameplay are searching for new Einherjar, training these recruits by exploring dungeons, then sending them to Valhalla. At the end of each chapter, Freya provides the player with an update about each Einherjar that has been sent to Valhalla, as well as requests for the types of units they need to fight in the war. Depending on how satisfied Freya is with Lenneth’s progress at the end of each chapter, she will bestow gifts upon the player to help with the next chapter. Failure to please Freya results in players receiving a premature ending.

Besides being able to use Soul Concentration to find new recruits, Lenneth can also find dungeons where she must cleanse the souls of the undead. Dungeon exploration takes on the form of a side-scrolling platformer, wherein Lenneth can use magic ice crystals to maneuver platforms and traverse walls. Lenneth can also use her ice abilities to freeze enemies as a means to avoid them or use them for platforming. However, the platforming in Valkyrie Profile has not aged well and is incredibly stiff, with players constantly having to try multiple times to land in the proper spots. While most dungeons are fairly straightforward, there are some locations where platforming is a huge component, and they are often the most miserable to explore. 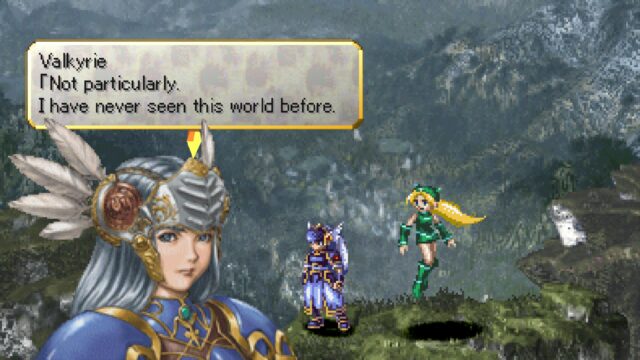 While dungeons can be difficult to traverse, combat is surprisingly straightforward. Each character is mapped to one of the face buttons, and the goal is to combo with all four of them in order to slaughter the enemy. Most enemies can only be killed one at a time, with the player’s mages being limited to one spell every few rounds depending on their skill level. Keeping mages from feeling overpowered raises the difficulty. Each weapon in the game has a specific number of attacks, so it’s important to look at one’s equipment in order to maximize the number of combos per turn. It’s worth noting that weapons offering a high combo count can break. There is a gauge on the left-hand side of the screen that calculates the combo, and if it hits 100% Lenneth and her team can perform devastating special attacks known as Purify Weird Soul (PWS). Once PWS has been engaged, the initiating character will be unavailable until the next turn. The remaining characters are left to build the combat gauge again until there are no more left, or they are unable to make it reach 100%.

Also unique to the battle system is the use of combat-only auto-skills, which assist Lenneth and her Einherjar. Players can level up specific skills such as the ability to cure status effects or heal characters without using items, as well as a guts ability which potentially sees a fallen hero survive a devastating attack. As characters level up, players can distribute skill points towards these combat skills, and since there is a variety of them to equip each Einherjar with, there is room for mixing and matching. This system ensures that each character remains valuable, especially in the challenging end-game encounters.

While Valkyrie Profile offers three different difficulty levels, ill-prepared players will face a steep difficulty curve regardless. To mitigate this challenge, Square Enix has added the ability to rewind during combat. This means players are able to make snap decisions to rewind poor choices or potential disasters to swing the tide of battle in their favour. This feature is a godsend, especially during the more challenging boss battles near the end of the game. 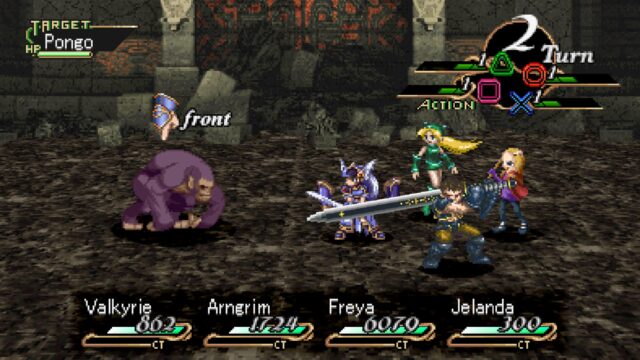 Come to me dark warriors, battle awaits us!

Outside of the rewind feature the only other addition is the ability to choose from several graphics options, none of which are very impressive. Square Enix has just taken the visuals from the PlayStation Portable version and magnified them, resulting in heavily pixelated characters and lush watercolour backgrounds that are now missing their crispness; there’s the sensation of everything on the screen being slightly out of focus. It’s heartbreaking to see that no care was put into cleaning up the graphics because even the hand-drawn character portraits are heavily pixilated and the FMV sequences are blurry. This total lack of polish gives the game a rushed feeling. Valkyrie Profile: Lenneth deserves more than this and it’s a complete travesty how it turned out.

What isn’t a travesty is the score composed by Motoi Sakuraba, who crafted some wonderful earworms for Valkyrie Profile. From the overworld theme “Doorway to Heaven” to “The ‘Unfinished Battle with God’ Syndrome” which gets the player pumped for combat, there isn’t a single bad track throughout the game, and each song does a great job accompanying both the story and gameplay.

Replaying Valkyrie Profile after a decade of dear memories was such a joyful experience for me, and I’m elated for everyone who will finally get the chance to play this classic. While I wish Square Enix had put more effort into this release, I also recognize that it was a pack-in with Valkyrie Elysium. While the difficulty isn’t perfect and the platforming is consistently frustrating, the shortcomings are balanced by an enjoyable combat system and one of the most timeless stories found in gaming.