Utawarerumono: Prelude to the Fallen Review

Aquaplus’ Utawarerumono series occupies an interesting niche, providing a hybrid experience of deep visual novel storytelling and tactical RPG combat. The original title was released as an adult-only game in Japan back in 2002, before success granted it an all-ages release that was later followed by the sequel duology of Utawarerumono: Mask of Deception and Utawarerumono: Mask of Truth. Though the duology made it west in 2017, the original game seemed stuck in Japan until the creation of this remake, Utawarerumono: Prelude to the Fallen. In terms of the product, Prelude to the Fallen occupies a sort of middle ground between the two titles in the duology, having much better pacing than Mask of Deception, but not reaching the same level of emotional impact as Mask of Truth. It nevertheless provides an engaging story mixed in with enjoyable combat.

Utawarerumono: Prelude to the Fallen follows a man who wakes up in a rural village having lost his memories. This village, and the outside world, is populated by humans with animal features — usually their ears and tail — with the protagonist standing out not only as a pure human, but also having a mask on his face that is impossible to remove. He ends up being given the name Hakuowlo by the family that brought him back to health and starts a new life in the village. Hakuowlo quickly changes the fortunes of the village thanks to his knowledge of advanced farming techniques, which gives a hint towards his true past, but this success also attracts the attention of the greedy local lord. 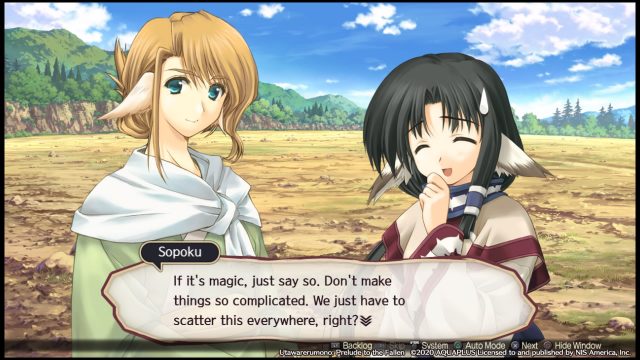 Soil management seeming to be magic is a strong indicator of the world’s current technological level.

Prelude to the Fallen’s status as a direct predecessor to the Mask titles means that a number of details will already be known to many players — especially the fates of the main characters, as many play important roles in the duology — but there are still lots of details that will come as surprising reveals. Most of the story concerns Hakuowlo’s attempts to allow his village to live in peace, but unfortunately the corruption and greed of those above them gets worse and worse until an uprising becomes the only available recourse. Hakuowlo emerges as the leader of the rebellion, which ends up thrusting him into power and the war-filled feudal politics that comes with it, though he at least gains numerous powerful followers in the process.

One can make a good guess at where certain scenes from the adult-only original version are no longer present, and while most of the female cast ends up fawning over Hakuowlo in some way, it’s much less egregious than in other titles and it feels like those scenes were always meant to be readily-excised. Prelude to the Fallen still suffers from some of the same issues as Mask of Deception, where it spends an excessive amount of time trying to build up the relationships with scenes that are ultimately irrelevant to the plot, though Prelude to the Fallen does a better job interspersing plot-driving events or some combat between them. The building of those relationships does help provide greater impact to plot events, but the game just goes a bit overboard in how much time is spent doing it.

Despite these misgivings, Utawarerumono: Prelude to the Fallen’s story is appreciably deep, aided by a strong localisation from NIS America, and though it often whiles away a bit of time between key events, there’s always a sense of something just around the corner. When the plot does move it’s fascinating, as players and Hakuowlo learn more about the world and his position in it alters. Though most antagonists don’t stick around long enough to be memorable, Hakuowlo and his allies are all very likeable, and ensure that most of the superfluous scenes still remain enjoyable. The series has a tendency to get bogged down with lengthy proper nouns (see the names of all the countries) that are impossible to remember, but its use of them is consistent and helps to drive some of the mysteries of the world that only truly come to the fore towards the end. 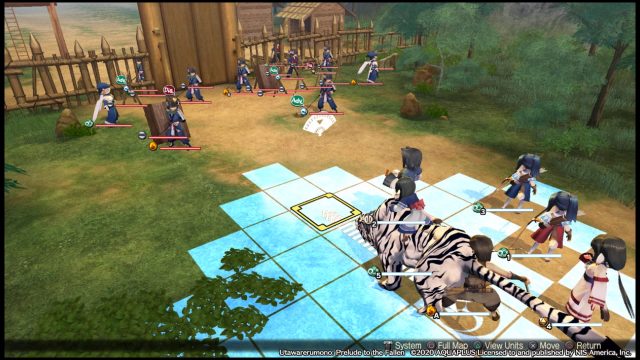 You may have a gate, but I have a giant tiger.

Like with its other visual novel and tactical RPG hybrids, Aquaplus has teamed up with developer Sting for Prelude to the Fallen’s grid-based combat system. Turns are individual to each combatant, who can move once and do one action (attack, perform a skill, or use an item) per turn. Healing options are limited, with only Eruruu able to use healing magic; all other healing comes from items that must be assigned to characters beforehand. Attacks generally come as combos, which feature quick-time button presses. Successfully pressing the button when indicated provides a little bit of extra Zeal — a gauge that goes up as characters strike or are themselves hit — and is sometimes necessary to unleash a full attack combo. Should a character accrue 100 Zeal, they gain first the ability to launch an extra hit in the next combo, before powerful Final Strikes get unlocked later on.

Most battles task players with defeating all enemies or specific opponents, though some require reaching a certain point in the map, while the usual failure condition is Hakuowlo being knocked out; anyone else who falls in a fight will be back to full health in the next one. The primary concern is manoeuvring the party into ideal spots to pick off enemies. Attacks from behind will do more damage, while attacking from the side provides a smaller boost, so there’s as always consideration of flanking while avoiding being out-flanked at the same time. There is an elemental aspect to consider, so certain combatants may be more effective against some enemies than others. As a tactical combat system goes, it’s very friendly to newcomers, being simple to pick up and learn, and it lets combat move along at a decent pace. A rewind option that narrows things down to individual actions aids that, letting players undo mistakes without having to start from the beginning and encouraging them to not spend too long unnecessarily thinking up a perfect strategy.

While the combat is very enjoyable, it may not fully satisfy the hardcore tactical RPG fans out there. Neither height nor line-of-sight have any impact. There is very little in the way of character customisation; a regular levelling system is accompanied by participants in battle earning points that can be spent improving the attack, physical defence, or magical defence attributes. Any skill upgrades are earned automatically and though there is an equipment system, it only offers one equipment slot for a passive bonus and two slots for items that can be used in combat. The regular difficulty balance is geared towards the easy side even without considering the rewind feature, particularly in the latter half of the game when a single Final Strike can easily wipe out upwards of two-thirds of most enemies’ HP bars. 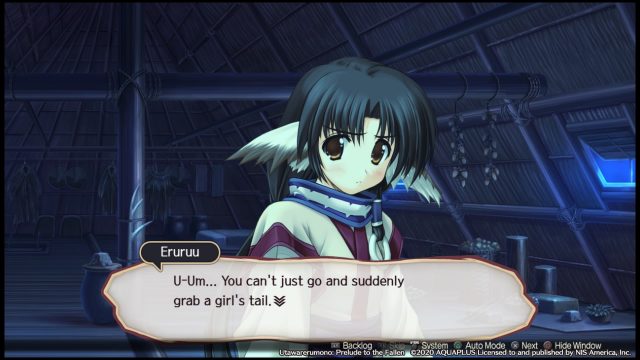 Hakuowlo doesn’t need to grab, the tail readily comes to him in the end.

The series has never been about aiming high on the visuals and that very much continues with Prelude to the Fallen. However, it uses a distinct visual style to good effect, and all of the character designs and backgrounds are pleasant to look at and link up well with the user interface. The battle engine is used for some of the more action-oriented events, but many of the details are left up to the player’s imagination.

Prelude to the Fallen’s soundtrack uses a mixture of extended arrangements of the original soundtrack as well as additional tracks from Mask of Deception and Mask of Truth, though the original is available as an option. The orchestral music is a little bit muted, but it still gives a great backing while many of the more emotional events utilise pleasing melodic songs performed by Japanese artist Suara. The game is fully voiced in Japanese, with strong performances throughout.

Utawarerumono: Prelude to the Fallen is an ideal opportunity to get into the series and learn what it’s all about. It won’t be for all; those unable to deal with the slow pace of visual novels will get unstuck in the many events that try and build relationships at the expense of driving the plot, something that is almost omnipresent throughout both this game and the Mask duology. However, for those who enjoy winding down with a deep story and some enjoyable tactical combat, the game provides that in spades.