The Legend of Heroes: Trails from Zero Review

The Legend of Heroes has been on quite a journey, spanning across multiple platforms and publishers, which has resulted in a slightly fragmented story.  Thankfully, some recent ports can help RPGamers catch up on an important story arc.  Sitting between the three Trails in the Sky games and the four Trails of Cold Steel entries, the Crossbell arc, which includes The Legend of Heroes: Trails from Zero, bridges the two stories together and provides much-needed continuity to the series. Though the age of the game is evident, and the gameplay can sometimes feel like a long chain of fetch quests, there’s plenty of charming characters and interesting plot to buoy along players that are already invested in the grand worldbuilding Nihon Falcom has put on offer through the series.

Trails from Zero spares no time introducing players to the core members of the cast, four Crossbell City police officers which comprise the Special Support Section, who quickly form a tight-knit team.  The story, which features plenty of references to and cameos from Trails in the Sky, is anchored to a time of transition, where a small state, rich with natural resources, sits between two larger nations, both actively seeking to control it.  The building political tensions, both national and in the greater world, are masterfully weaved into the overall storytelling.  There’s oodles of plot to soak up in the game, especially if the player is patient enough to seek it all out, as even seemingly chance encounters with random NPCs may end up heralding major story arcs in future Cold Steel titles.  Randy’s irreverent character in particular shines brightly in the title, though all characters have plenty of witty dialogue, and the game is buoyed by a well-written localization.

The game’s structure — that of a small force acting as a glorified PR stunt aimed at helping the citizenry — means the game’s story lends itself to largely being focused around the SSS team doing small tasks and errands for locals.  While this pays off in the end, it does drag down the overall pacing. A few secret requests at least help out in breaking up the pacing issues.  Yet despite the leisurely pace, the final chapter does a fantastic job wrapping up most of the story’s conundrums in a satisfying way — a rarity among Trails titles — while leaving just enough breadcrumbs to tempt players towards the second part of the duology.  The conclusion masterfully succeeds at providing a satisfying introduction to Zemuria’s city-state.  Trails in the Sky players will also enjoy seeing one last dangling plotline the trilogy finally have a satisfying ending.  World building across multiple titles is no simple feat, yet learning about the greater world of Zemuria is something Zero executes on flawlessly; the crafting of a vibrant, active city is some of the best storytelling in the entire Legend of Heroes series. 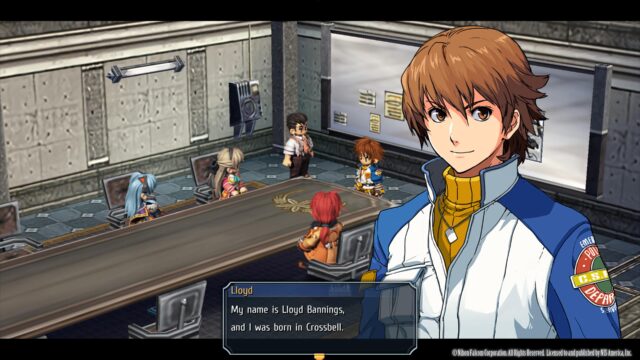 Elie, Lloyd, Randy, and Tio comprise the main protagonists for the game

Combat has a few improvements over Trails in the Sky, though may feel like a step back for Cold Steel veterans, veterans, which makes sense as Zero originally launched in Japan before Cold Steel.  It is notable that Trails from Zero is significantly easier than both the sub-series preceding and succeeding it, though difficulty is adjustable as the player wishes.  Enemies are generally visible on the map, and the SSS can try to get the jump on foes by attacking them from behind and stunning them, or by simply running into enemies that have not yet noticed the party, for an advantage.  Players can prepare their characters for a variety of combat situations by ensuring their orbments, combat devices that use quartz to unleash various abilities and power-ups, are in tip-top shape. Quartz come in seven different varieties, and bestow combat perks, largely via stat boosts, as well as exploration benefits, such as showing where all treasure chests are in an area.

Each character has a slightly different layout for their orbment, and stacking the right types of elements unlocks spells, known as arts, that can be used during combat.  For example, unlocking the Ice Hammer art requires a minimum of four water and one earth elemental power on a line, while the Flare Butterfly art requires at least eight fire as well as three or more wind elemental power in a line to be usable.  There’s no in-game guide for these, so players will need to experiment to see how much of each element a quartz provides, as well as what spells are available to their characters.  Diversifying spells across the four main party members is both useful and necessary for some of the more challenging fights.  Quartz can discovered in chests, received as quest rewards, or crafted via sepith dropped by enemies.

Once combat begins, turn order is displayed at the top left of the screen, with a variety of icons denoting special boons (or occasionally penalties) a character may have during a specific turn, such as a guaranteed critical, recovering HP, or in rare circumstances dealing or receiving no damage at all.  Some abilities can change around the turn order, such as a special craft which delays the opponent’s turn, though these cost CP to use, and cannot be repeatedly cast.  Orbal arts, which have a charge time, can also shuffle around the turn order in favour of the player or enemy combatants.  Lastly, any character with over 100 CP can interrupt the turn order at any time with a powerful S-craft, which will drain all their CP but often has unique benefits, such as a party-wide heal, blocking all incoming damage, or applying major debuffs. 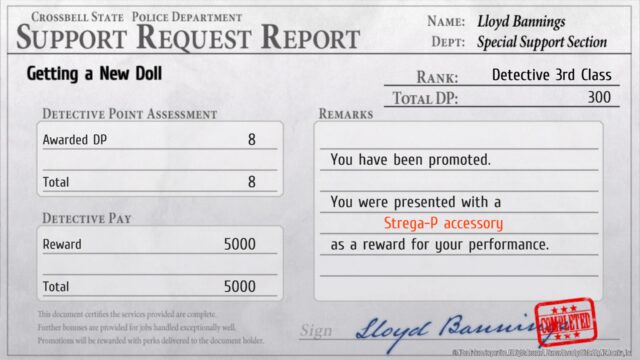 Completing quests rewards a sense of satisfaction, plus equipment and quartz

Trails from Zero gains a pair of additional combat options over Trails in the Sky, though they will be somewhat old hat for Cold Steel afficionados: combo crafts and team rush attacks.  The former is further refined in Cold Steel III and IV in particular, but have their origins here.  These attacks not only do strong damage, but can often finish fights in a flash, ensuring the party racks up a number of sweet experience multiplier bonuses. With just four core party members to equip, players who became exhausted trying to keep up with a massive party’s management in more recent Trails titles will enjoy a considerably more streamlined experience.

It comes as no surprise the game’s music is spectacular, with the flair Trails fans have come to expect from the series.  Even the tunes that the player hears the most — notably the battle and town themes — manage to stay fairly fresh.  On the other hand, the graphics are starting to feel their age, and while this is understandable as the game began as a humble PSP title over ten years ago, the PlayStation 4 also fails to receive the same visual upscaling that the Nintendo Switch and PC versions versions received from the talented PH3 Games studio.  Also notably missing from the PS4 version is a dialogue log, which in a text-heavy game lacking English voice acting, is supremely frustrating to not include.

Hidden throughout the world, often during small windows of opportunity, are a variety of recipes.  Cooking a special dish typically rewards a unique healing item, while cooking peculiar dishes rewards the player with novel attack items.  As these versions are not available through stores, cooking is highly recommended to have a wide variety of items for any situation.  Fishing not only provides cooking ingredients, but is also an additional source of sepith, accessories, and of course bragging rights for the completionist. 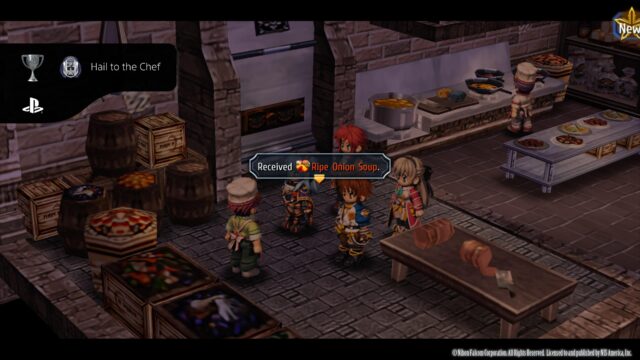 Though finding all the cooking recipes is tricky, it pays off in the end.

Exploration feels mostly rewarding, with many treasures awaiting players patient enough to look for them.  The Crossbell region feels large and sprawling, without being too empty.  Witty chest messages return from Trails in the Sky and make tracking down each treasure trove delightful.  However, fast travel inside the Crossbell metropolis itself unlocks later than it should, and there’s no way to quickly jump back to town, though the bus system helps make the sprawling region feel a little more traversable.  This is alleviated slightly with occasional temporary transportation, but even this temporary relief comes quite late in the game, shortly before a period of time where the player must stay within the Crossbell city limits.

In the end, Trails from Zero delivers exactly what it promises: a unique opportunity to visit a story arc most western The Legend of Heroes fans never got to experience.  Those who are looking to fill in the notable gap in the series will delight in discovering a plentitude of characters getting their fifteen minutes of fame.  As a potential place to start, the Crossbell duology sits in a curious place between Trails in the Sky and Trails of Cold Steel, such that players of either will be better attuned to the setting, with both working as better introductions. Even so, Trails from Zero is an easy, enthusiastic recommend for existing Trails fans.