Tales of the Abyss 3D Review

As is often the case with new consoles, it can take a while for RPGs to make their mark on a system. Namco Bandai has beaten many by establishing a relatively early presence on the 3DS with this port of Tales of the Abyss, as well as finally giving Europeans the opportunity to play the game after the original PS2 release failed to land on our shores. The port does lack extra content for those who have already played the game, though the removal of technical issues is a big plus. Tales of the Abyss 3D is a very welcome fit on the handheld and an excellent opportunity for those who missed the original, for whatever reason, that should be taken.

Tales of the Abyss is set on Auldrant, a planet ruled by Yulia’s Score, the detailed set of prophecies that its inhabitants dutifully follow. Main protagonist Luke fon Fabre is one of the more upper-class inhabitants of Auldrant, living a sheltered noble’s life in the city of Baticul after being kidnapped and losing his memories seven years previously. During one of his sword-training lessons, a mysterious woman appears and attempts to assassinate his instructor. In the chaos, both Luke and the assailant end up transported many miles away, setting off the game’s events.

Following the series’ “evolution over revolution” approach, gameplay keeps the same basic tenets, adding a few quirks to differentiate it from the other games. Tales of the Abyss’ Flex Range Linear Motion Battle System, like the others in the series, is real-time, relying on combos as the main way towards victory. Players control one of the four party members, with the other three controlled by the AI. The battle system does weigh a bit too heavily on button mashing, but there are rewarding nuances and battles are, most importantly, enjoyable. Boss fights are always a nice spectacle, while the standard encounters are action-packed and go by quickly enough to maintain interest. 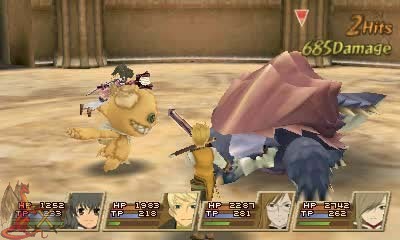 One of Abyss’ nuances is the ‘Field of Fonons’ battle feature. The use of elemental attacks or spells temporarily leaves a small area that upgrades certain attacks depending on the element. Not only does this give players a helping hand in battles, but it also helps provide a sense of the party working together. On the standard difficulty, the AI does a good job in following orders, keeping out of too much trouble, and helping the player out. The game also incorporates the ability to free-run, resulting in a much more open battlefield than its predecessor, Tales of Symphonia. Players have a decent level of control over character growth and powers, able to select characters’ equipment, which artes they can use during battle, and some basic behaviour patterns for the AI-controlled characters. Tales of the Abyss also adds Capacity Cores, items that provide growth boosts and teach a large number potential passive skills to the character while equipped.

Locations in Tales of the Abyss do encourage some exploration, often containing various items nestled in alternate paths and simple puzzles that help to break up the action and keep things fairly fresh. There is a good amount of variation in theme and architecture, albeit without going too far outside the normal JRPG mix. Difficulty is adjustable at any time, although most players shouldn’t have much trouble on the standard difficulty setting, and completing the requisite dungeon puzzles won’t provide much of a challenge. More experienced Tales players may want to go straight into the higher setting. All of the action takes place on the top screen, with the touchscreen used almost solely for the world map when outside towns and dungeons, or to display extra information in the menu screens.

The exceedingly good handling of character development is easily Abyss’ biggest storytelling strength. Luke’s journey from selfish and sheltered brat into the final hero of the game is plotted superbly, along with most of the plot in general. The rest of the party are not simply there as an entourage making up the numbers either, and all undergo defining moments and growth that greatly endear them to the player, with a special note of appreciation for the champion of snark, Jade. Even when Luke is in his early, selfish stage, the game conveys his feelings very well, making his actions believable and keeping the player interested. Skits, which are entirely optional scenes and conversations between characters that help build on the story and relationships between the party members, are regularly present throughout the game. Those who would rather concentrate on exploration and battles are free to ignore them and carry on, but they provide those who like character interactions plenty more to enjoy.

Possibly the only real downside in the story is that it does take a bit of time to draw the player in fully. Although with the hindsight of getting further into the story, the slightly haphazard feel early on is somewhat justified and players will be greatly rewarded for pushing through. When the game does get going, the story is excellent, full of the many twists, turns, and subversions that one has come to expect in the Tales series, including interesting examinations of the ethical questions the plot brings up. The world itself is an interesting concept, both in its physical make up and the way Yulia’s Score dictates life. 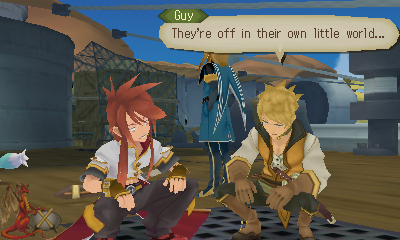 We can’t be entirely certain which world Luke’s in either.

Outside of the story, Tales of the Abyss features the series’ usual optional sidequests that add to the world or reward players with bonus equipment, skills, or costumes, although it should be noted that some of these are hidden away and very easy to miss. There is plenty of content without these sidequests, however, and the game is a good forty hours at the very least. Tales’ traditional New Game Plus is present, enabling players to use the Grade earned from battles to purchase unlocks or the ability to carry things over into the new playthrough.

The move to 3DS does mean that the resolution has been dropped a bit. The level of detail still closely resembles that of the original PS2 version, however, and the art style helps the game fit nicely on the handheld. Unfortunately, the 3D implementation is generally a disappointment. There are some areas where the effect is impressive but these are few. Elsewhere the feature doesn’t add much, and in fact causes a fair amount of aliasing, so keeping the 3D off may be the preferred choice for many. On the plus side, the 3DS port has removed the vast majority of technical issues that marred the original version. Loading times have been drastically cut to a second or two at most, and battles are very smooth even when there are numerous flashy skills going off at once. The world map does have a few brief slowdowns, but these are infrequent and very easy to ignore.

The voice acting is very good, actors giving credible performances and keeping the story and cutscenes flowing, Kirk Thornton especially delightful with his deliveries of Jade’s snarkier lines. Virtually all of the story-related cutscenes are fully voiced but unfortunately the game is a direct port, including localization, meaning that the skits remain unvoiced. A disappointment after Vesperia’s voiced skits showed how much more it helped bringing them to life. The musical score is composed by Tales veteran Motoi Sakuraba, with help from Shinji Tamura, although a few tracks are also supplied by Bump of Chicken frontman, Motoo Fujiwara, including the game’s theme. Like the graphics, the soundtrack keeps the distinctive Tales feel, complementing the settings, visuals and scenes very well.

Tales of the Abyss is a very worthwhile addition to gamers’ collections, and more than welcome on the 3DS’ library. The removal of the technical issues is much appreciated and gives players the opportunity to experience the game at much closer to its full potential, where it easily earns the right to be spoken out in the same breaths as the more beloved entries in the series. Tales of the Abyss 3D is a very solid game all round, and the handling of characters’ growth throughout the story should stick in one’s memory for a good while.