Sword of the Necromancer Review

The idea of bringing back to life those who passed away has been in many tragic stories. Sword of the Necromancer invites players to attempt a resurrection quest, enabling them to bring back foes to fight as allies in the process. It includes a queer love story, a simple but engaging battle system, and a decent array of monsters and items. Even though this roguelike Spanish RPG isn’t above average, it does a great and welcome job in how it normalises the relationship between its main characters.

The game sees players taking on the role of Tama, a former bandit with pink hair who has been tasked to work as a bodyguard to a priestess on a pilgrimage around the continent. Koko, said blonde priestess with great knowledge of history and magic, is ignorant of how people live outside her own town. The two protagonists have very little in common, but they forge an unbreakable bond. Shortly after realising that they are in love, Koko dies tragically, so Tama looks for a heretic power to revive her. Legend says that there is a tool created to grant immortality and bring back the dead called the Sword of the Necromancer. Though the power infused in this weapon goes against the will of the gods and those who have tried to acquire it found only their demise, Tama decides to go inside the Necromancer’s crypt and obtain the sword to revive her beloved. 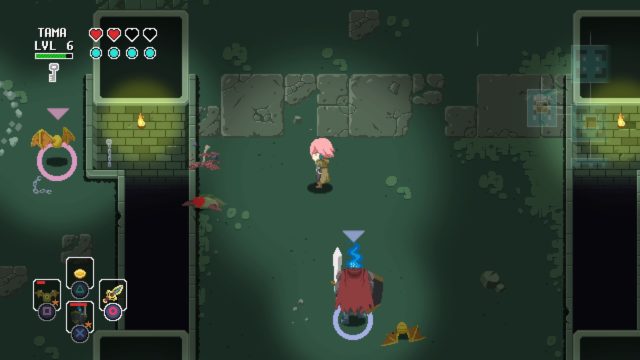 Tama can have allies of all shapes and sizes.

Combat is the essence of the game and is serviceable yet unremarkable. The simple battle system can be mastered after a few encounters: there is one button to dash (used to run or dodge) and four buttons to perform other actions. Players designate items into each of the four slots; however, some items do not provide extra actions, but simply grant status bonuses. Players can equip a ranged weapon, a melee weapon, a summonable monster, and an amulet, or choose any combination of the above as they see fit. Characters also have soul and heart points: souls enable the dashing ability and hearts represent health. While soul points recover over time, health points are only recovered by picking up hearts, dropped by monsters or found inside some breakable objects.

What makes Sword of the Necromancer different from other roguelike RPGs is the resurrection of monsters. After foes are revived using the sword, they fight on the player’s side. They can also level up and acquire better abilities, but they can die easily, losing all the abilities and levels that they may have received, and cannot be revived again. One issue related with this differentiator is that summonable allies are mostly clumsy because of their AI, and sometimes run in circles instead of fighting. The solution is to call them back and summon them again until they are helpful. The game also includes an elemental system, in which some enemies and items have weaknesses or resistances, changing the effectiveness of attacks. Items can be upgraded by using the forge and certain objects scattered along the dungeon. Each item has four slots for abilities: some skills can be negative, such as adding an elemental weakness to a shield, while others can be extremely beneficial but are expensive. 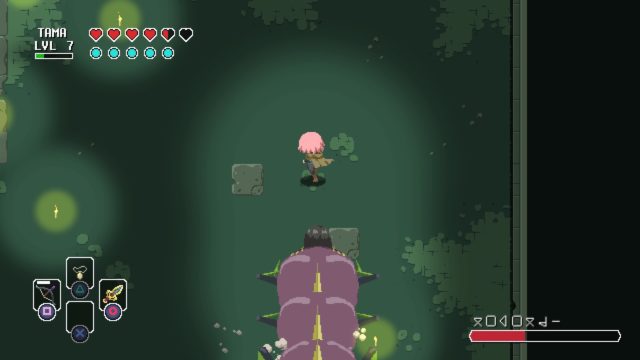 The Sword of the Necromancer can also annihilate foes.

Combat is not challenging as most enemies (including bosses) have very predictable attacks and are not threatening at all. Nevertheless, dying is highly penalized: if players die, they lose half of their levels and most items (except for the eponymous sword), and they are returned to the dungeon’s entrance. On the bright side, even if players should die, traversing the dungeon from the start feels different because it has randomized floors, where objects, foes, and rooms change, and only bosses remain the same. All floors have locked doors that hide powerful foes, but before attempting to kill them, players need to find the key that opens that door, usually carried by a monster or hidden inside a treasure chest.

Sword of the Necromancer features accessibility options to help those who find the game too challenging. After dying three times, an option to change the difficulty settings appears. Not only can players reduce the combat difficulty, but also change the consequences of dying, such as retaining levels, keeping all items, continuing from the last visited floor in the dungeon, or having an extra item bag that adds four additional slots. This item bag is extremely appealing since there is very limited space, with only four slots for all items: weapons, grimoires (spell books), shields, amulets, consumable items, and summonable monsters. Players who enable the additional item bag will have eight slots, but even with this extra space, it is crucial to decide which objects to pick up and which to ignore. While players wanting to have a big party of allies would have to contemplate having less objects, those wanting to carry different weapons or spells would have less space for allies. Having a good variety of items and monsters, players can personalize the equipment of the protagonists through the variety of items and monsters.

The art style isn’t very ambitious but does a decent job. While graphics include a retro style while exploring and battling, they add more stylized images when watching memories. These graceful pictures include a layer of voice acting, making them the most elaborate and interesting feature. If the game could keep this quality of visuals all the time, the whole experience would be a delight, yet these moments are sporadic. The retro-styled dungeons, however, become visually repetitive after a while because all floors include very similar details and colors, as well as rooms with objects ordered similarly. The soundscape includes a few music tracks and sound effects that fit their purpose, without being mind-blowing. As a result, the game looks and sounds fine, but not enough to linger in the memory of players. 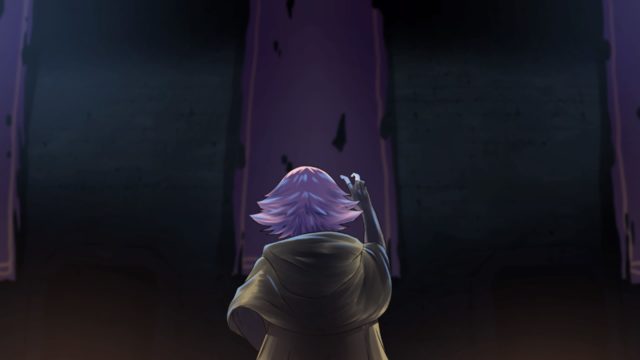 The game adds a couple of interactive options to go beyond traditional RPGs. There is a two-player local co-op option for those who want to beat the game with a friend, with the Steam version allowing players to have this experience remotely too. There is also a streamer mode, in which viewers can interact with Tama: they bless or curse her by voting in the chat, and the most-voted option along with the karma value of the player will have an effect on Tama, such as healing her or giving her a status ailment.

Sword of the Necromancer includes a love story with queer characters who can revive monsters to fight alongside, a good variety of items, randomized senarios, and options to customize difficulty, with the promise of adding more content in the near future. Although it doesn’t shine brightly in any aspect, it does a fair job in all departments and proves that crowdfunded campaigns can work.