A Different Way to Swap Tilesets

Originally released on iOS and Android before coming to Vita, SwapQuest is a budget puzzle-RPG hybrid from independent developer Rebusmind. Sporting solid gameplay with good variation between its levels, the game provides effective entertainment for the couple of evenings it should take to polish off. Some may nevertheless feel that the game doesn’t quite offer its fill of content and things to do outside of simply replaying it.

There’s not much to the story: the game’s premise about having to collect the broken shards of a special crystal to seal away a horde of monsters endures as its only plot point. The only scene outside of the introduction and conclusion is a midway reminder of how important clearing said premise remains. That said, it’s an interesting enough and decently written premise and nothing is lost by not focusing on a narrative.

Players choose from either Wilbert or Wilma, the offspring of the current monarch who guards the special stone with the dark horde trapped within it. As is wont to happen in such tales, the crystal shatters and the horde is unleashed on the kingdom. The young heir is tasked with finding the twelve shattered pieces, while evading the horde’s clutches, so that it can be made whole and resume its trapping duty. Players can choose from six classes in the Vita version, which impact Wilbert or Wilma’s speed, strength, or evasion when going through the levels in addition to providing a bonus skill once enough XP has been gained. 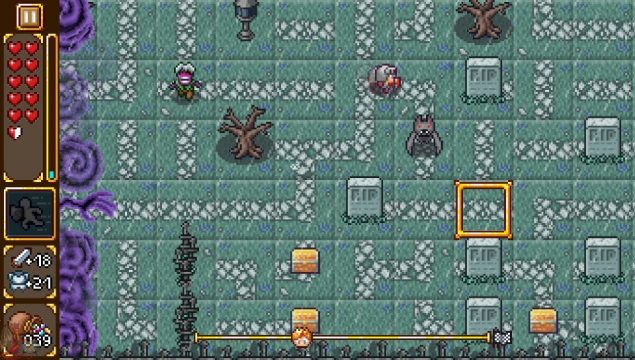 The long-deceased may not appreciate being moved about, especially when their tombstones are smashed to do so.

The majority of levels require the player to steadily make their way in one direction — the exact direction varies — while the screen scrolls as the horde slowly catches up. This is done by swapping the various tiles to create a path through, with the player able to stop Wilbert or Wilma and choose which direction to go where necessary. The game helpfully supports both button and touchscreen controls at all times, though the touchscreen feels like the best way to go about things. In the initial run through, the priority is simply on making it through to the end of each level. However, in order to mark the game as complete, players will need to find the crystal shard that is placed somewhere within each level, usually found on a monster or nestled within one of the environment’s features. It can sometimes be hard to spot or get to the shard and missing it requires the level to be repeated again later, which is a potential source of annoyance.

Players take damage from environmental issues or from various monsters that scatter the level. When players run into a monster, an automatic fight occurs until one combatant falls. There is virtually nothing players can do to influence combat once it starts, but a caravan on the world map at least allows equipment upgrades and the steady gaining of experience also helps power up the hero. There are also a few special boss monsters that make up a level by themselves requiring unique tactics to beat, as well as some bonus small challenge maps that provide other interesting variations on the gameplay. 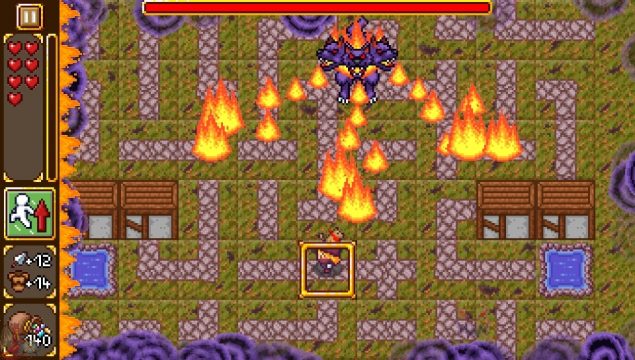 Boss fights feature some neat mechanics to change things up.

Once players have gone through the initial route of levels, free choice is granted to replay them, including those that were bypassed from choices on that first run, though for some odd reason the major bosses and bonus challenge maps only seem to appear once. Three difficulty options, changeable between levels, allow players to take on further challenge or just make it simpler as they go about collecting remaining shards. There’s a good amount of variation between levels, both on the visual front and in the environmental and creature hazards that appear, and combined with the solid gameplay it means that the game remains engaging through the five or so hours it will take most to roll the credits. There are no complaints to be had over the sound either, which ably does the job of supporting the gameplay without really standing out.

For those looking for a game to engage their minds over a couple of days or evenings, SwapQuest fits the bill very nicely. It’s an entertaining little romp, with enough RPG elements to offer a sense of progress as time goes by. It would be nice if the game was able to offer a bit more from a content standpoint — more bosses or challenge maps would greatly help alleviate the later repetition — but on the whole, the game accomplishes what it aims to do. 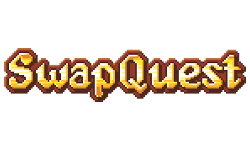