Deck the Halls with Turn-Based Combat

Before this April, I’d never considered playing a SteamWorld game. As a primarily turn-based RPG fan, the series was never so much as a blip on my radar. With the release of SteamWorld Quest: Hand of Gilgamech, a turn-based, deck-building RPG, my interest was immediately piqued, and my curiosity was handsomely rewarded. In taking a standard save-the-world RPG tale and populating it with fascinating characters dealing with relatable issues in a beautifully rendered world and adding an addicting, customizable battle system, developer Image & Form has created a true gem of a game for the Nintendo Switch.

SteamWorld Quest takes place in the same universe as other SteamWorld games and is presented like a storybook tale about knights and dragons. This storybook motif is wonderfully executed. The game is split into chapters, while the book itself is used as a visual anchor for narrated sections, complete with hand-drawn still images, as well as for navigation through both the narrative and overworld. The overarching story is standard RPG fare: save the town, save the kingdom, save the world, but it’s the characters and the lessons they learn along the way that really make SteamWorld Quest stand out in its storytelling. While a great deal of humor exists in the story, the characters’ more serious, fascinating personal journeys are where the narrative reaches its peak. 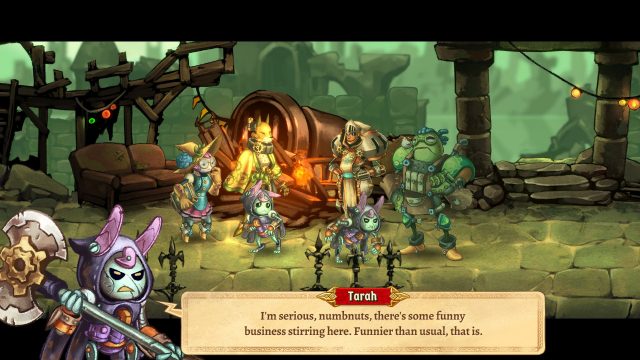 There is quite a bit of humor to be found in this game, as well as some more serious themes.

The main heroines in SteamWorld Quest are Armilly and Copernica, small-town friends who begin the story on a short journey to find a mushroom. Armilly dreams of a life of heroism despite her humble beginnings as a grocer’s daughter. A great deal of the story revolves around how she deals with the constant rejection by the local chapter of the Hero’s Guild and the complications during the meeting with her idol, Ancient Hero Gilgamech. Copernica, a college of magic dropout, also undergoes a bit of a rude awakening when the adventure takes her to her alma mater and an encounter with a certain college professor she’s long had a crush on. These encounters are excellently written and speak to the culture of hero worship and how often that idolization is sadly misplaced. Fellow party members Galleo, who’d much rather stay safe at home on Mom’s basement couch; former hero Orik; and orphaned thieves Tarah and Thayne also have some touching, life-defining moments as the story progresses, all as relevant in today’s world as in this steampunk fantasy realm.

Gameplay involves characters moving through side-scrolling areas such as towns, universities, woods, and dungeons to complete chapters of the story. Each area is quite small, perhaps two to three screens wide before characters move to a new room or area and the game autosaves. There are rarely more than twenty areas in any given chapter, making each chapter a comfortable hour or so in length and providing a well-paced story. SteamWorld Quest uses its beautifully detailed layers of graphics to hide valuable treasure chests and small passages behind foreground pillars or breakable boxes, encouraging players to explore every nook and cranny and even sometimes to ignore the dead end the mini map is claiming is there. At the end of every chapter players are told what percent of treasure they’ve found, a nice little detail that encourages replays of chapters to find everything.

Saying the battle system in SteamWorld Quest is a great deal of fun is an understatement. Throughout the game players collect punchcards, artfully reminiscent of the old days of computing, that allow their characters to act in battle. There are all the actions one would expect in an RPG: standard attacks, elemental attacks, spells, buffs and debuffs, and even item cards. Each is beautifully illustrated and detailed, showing the cost of using the ability as well as expected HP damage or healing. Cards come in a few different types: some will charge up a steam pressure gauge the party shares, many will require steam pressure to be played, and a few, typically item cards, don’t affect the pressure at all. Players will find new cards as the story progresses, purchase new cards with currency, and upgrade others with specific items dropped by monsters. 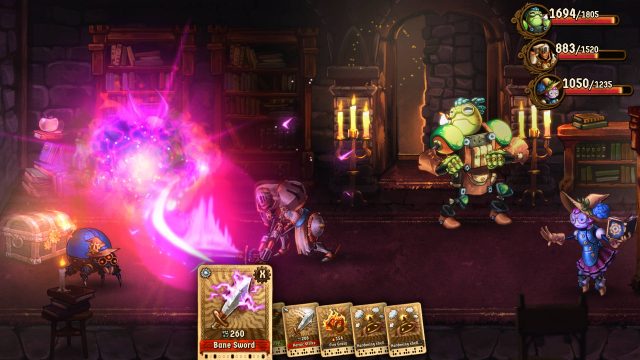 Battle animations are gorgeously illustrated, as are the hand-drawn cards used to command the characters.

Players can take eight character-specific cards for each of three selected characters into battle. Six cards are dealt at the beginning of each battle, with three more dealt each subsequent turn; up to two can be swapped for different cards and three can be played each round. A player’s turn takes place before enemy turns, typically allowing for desired strategies to be pulled off flawlessly. While cards are dealt randomly, well-designed decks can easily be crafted to allow for immediately dealing damage from cards that also build Steam Power for future healing and more powerful attacks. While all this seems a little complicated, in-game tutorials during the first few battles do an excellent job of preparing players for the intricacies ahead. Despite deck-building mechanics, this battle system closely resembles a traditional turn-based system; cards just provide the methods of attack and skill usage.

The cards as battle actions work wonderfully with other game features to allow players maximum party customization and flexibility. While party statistics are mostly set by character level and equipment, the cards can change any character’s role in a heartbeat. Players will encounter dozens of cards per character throughout the game, but are limited to eight in their battle deck. A simple switch from fire spells and attacks to ice spells, buffs, and healing can change the character’s role from fire mage to an icy cleric at any time. Enemies are visible on-screen before battle, so once players beat an enemy and learn its weakness, decks can be changed before each encounter, allowing for maximum effectiveness. The battle party can also be swapped out at any time between battles, as only three can participate in each encounter. Unfortunately, party members not active in battle don’t receive experience, but each chapter is endlessly replayable, so a small amount of grinding can be done, up to a non-transparent cap that cuts earned experience dramatically after characters reach certain levels. Those who love to grind excessively will be disappointed by this feature, but with the difficulty able to be adjusted at any time, those having problems can simply choose an easier setting. 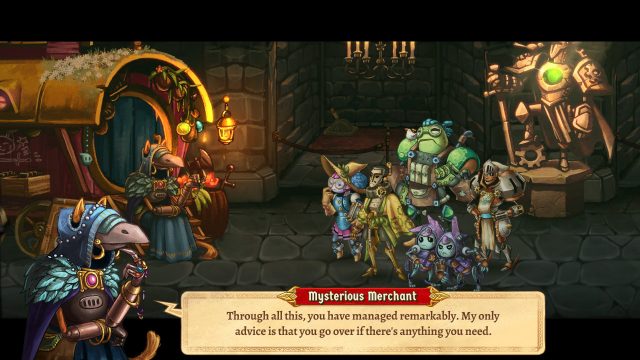 Characters are intricately detailed and animated, while the background has its own special touches such as the chalk drawings on the side of the wagon.

Graphics are another standout feature of SteamWorld Quest. Everything is beautifully animated in battle, from each attack and spell to every status ailment and reaction to physical blows. Character and monster designs are fanciful, vibrant, and fully articulated and animated in such a way that they each seem like unique creatures. At any given time players select one of their five characters as lead to walk around and interact with the world. One of the tiny but fascinating graphical details is watching the characters’ different styles of running, walking, and smashing crates. Galleo’s lumbering gait, Armilly’s heroic stride, and Tarah and Thayne’s scamper will have players switching between characters just to see how they act. Outside of character animations, the game also shines with small touches to the world around the players. Some chalk grafitti on the item shop wagon or a robot strolling alone far off in the background of an apple orchard aren’t always immediately noticed, but easily appreciated when they are.

The auditory experience of SteamWorld Quest matches the visual one well. The music is pleasing to listen to and fits the mood of areas characters find themselves in. The game begins with a stroll through the woods and town to a tune that can best be described simply as medieval. There is some excellently voiced narration in the intro and at the beginning of chapters, but characters aren’t voiced. When the robots speak, their mumbles and jumbles are audio reminiscent of Charlie Brown’s parents and teachers in animated Peanuts cartoons. While perhaps some robotic voice acting similar to Apple’s Siri might have worked as well, the gobbledygook speech is hardly noticed past the first couple of chapters and just adds to the somewhat silly steampunk vibe of the game.

SteamWorld Quest is an excellent fifteen-hour adventure filled with humor, well-designed gameplay, and vibrant, detailed graphics that make the relatable characters and world around them just pop. While this game might be on the radar for current fans of the SteamWorld universe, it should pique the interest of many fans of well-written, visually pretty RPGs as well. I’m delighted I got a chance to play this and now find myself interested in digging into the rest of Image & Form’s other titles. 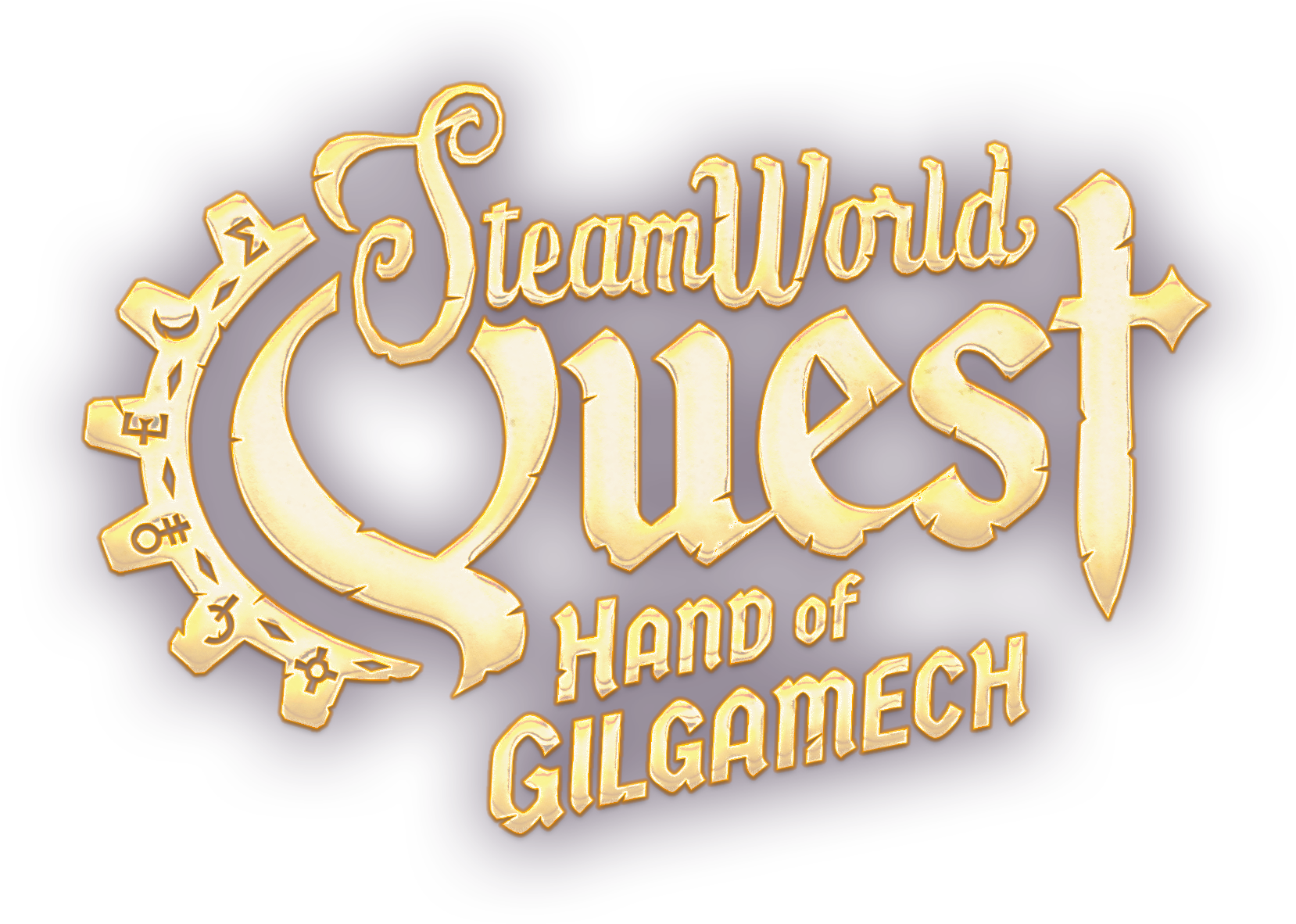