The Fart in Our Stars

Currently in the middle of its twenty-first season, South Park is one of the longest running cartoons in television history, famous for its no-holds-barred humor and timely sociopolitical commentary. After 2013’s surprisingly fantastic South Park: The Stick of Truth, a sequel was all but inevitable. The cleverly titled South Park: The Fractured But Whole builds on the legacy of the first game, improving on many elements but also taking a few steps backwards.

Once again donning the crown of the new kid, King Douchebag, players jump into the game in the midst of the Stick of Truth-era medieval battle that serves as a tutorial to the revamped combat system. It’s not long, however, before Eric Cartman’s alter-ego The Coon arrrives and the entire town quickly shifts gears into playing superheroes. Once again forced to start fresh, the new kid brings his potent farting powers to Coon & Friends, becoming the Amazing Butthole as the young superheroes of South Park search for a missing cat. Meanwhile, a recent crimewave threatens to tear the tiny mountain town apart.

Like Stick of Truth, the superhero sequel draws heavily from the lengthy history of South Park, incorporating elements of classic episodes into the original story and side quests of the game. Fractured But Whole draws from seasons seventeen to twenty in particular, with a heavy emphasis on the social justice mockery of season nineteen. Over the course of the game, players can develop their Dungeons & Dragons-inspired character sheet with factoids about their character, taking advice from a very confused Mr. Mackey, Father Maxi, and of course P.C. Principal. By the end of the game, the new kid can self-identify as anything from a straight white cisgender American Christian male to a polysexual genderfluid Hispanic Russian Hindu person. But not a Canadian for some reason. The choices players make for the character sheet don’t affect the game in any way at all, but a bunch of rednecks will try to beat the new kid up regardless. 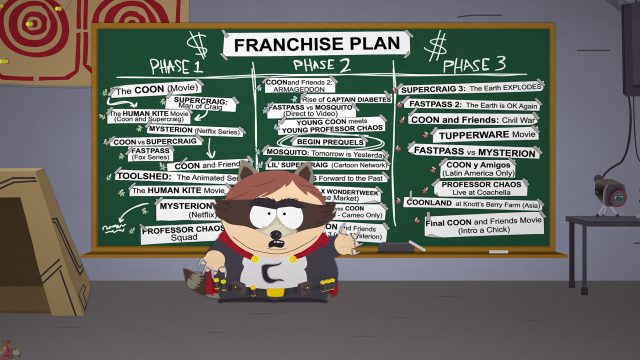 Superheroes need a solid franchise plan if they hope to survive in the cutthroat Hollywood landscape.

Unfortunately, the story does suffer from a major issue. While the usual South Park humor lands as well as it ever has, the game’s pacing suffers significantly towards the end. The game is rich with side quests and exploration throughout, but as it makes its way to the climax, these quests become fewer and farther between, leading to a rapidfire ending sequence that features boss fight after boss fight with very little interspersed content. The rather sudden and seemingly anticlimactic ending may jar some players, but for fans of the show, it rings true as a classic South Park trope.

All the kids of South Park have their own superhero identities, and these all tie into the game’s revamped combat system. Battles take place on a small tactical grid, and each turn characters can move a short distance and launch one of three attacks, each of which have different ranges and benefits. Positioning and status ailments take center stage, leading to some terrific encounters and challenging boss battles. Up to three characters can join the new kid in battle, and choosing allies with complementary power sets is important to success.

The new kid is initially given a choice between three superhero classes: the Blaster, the Brutalist, and the Speedster, which correspond with the typical mage, warrior, and rogue RPG archetypes. As the game progresses, new classes are unlocked and the new kid is given the ability to multiclass. However, only three powers can be equipped at a time, plus one ultimate skill which can be used when a party-shared power bar is fully filled. Nine different classes can be unlocked by the end of the game, and mixing and matching powers is a lot of fun. Nearly anything is viable, and nothing is permanent, so players can experiment freely.

Exploring the town is a major aspect of Fractured But Whole‘s charm, and the town has seen some major changes since Stick of Truth. The northwest of town, renamed “Shi Tpa Town” in season nineteen, has been completely gentrified, and Kenny’s house is now surrounded by the ruins of the failed SoDoSoPa hipster neighbourhood. You can even see the ruins of South Park Mall, which was devastated during the Console Wars just prior to the events of Stick of Truth. 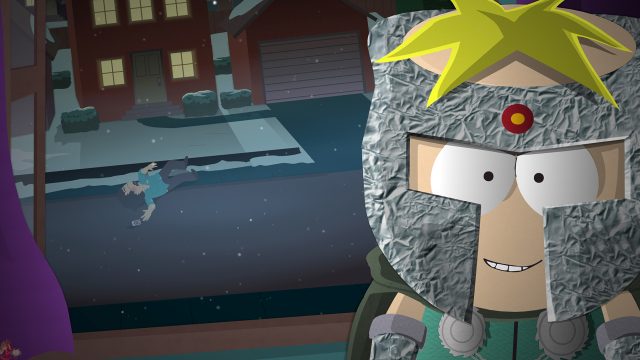 Of course, exploring is easier said than done. Many areas are blocked off, whether it be something as pedestrian as a locked door or as fanciful as a pit of lava made of red LEGO bricks. Luckily, over the course of the game the new kid, with the help of the rest of the South Park gang (and also Morgan Freeman), gains powers to get past these barriers. These powers all involve something going in or coming out of the new kid’s butt, hence his moniker, the Amazing Butthole.

Interacting with the environment is one area where the game has taken a step backwards since Stick of Truth. In the previous title, many, if not most enemies could be killed in advance via clever manipulation of the environment. While this is still possible, the number of opportunities to do so are exceedingly rare. It’s quite disappointing, as this was one of Stick of Truth‘s best features.

Visually, Fractured But Whole hasn’t changed much from Stick of Truth, and this is exactly how it should be. Considering the game effectively looks and feels like playing through an actual episode of the show, improving on these visuals is almost impossible. The character customization is even more detailed than what was available in Stick of Truth, featuring dozens of costumes that can be mixed and matched and further edited by color. The town itself is rife with subtle sight gags and references to old episodes, and even some places that haven’t been seen in the show in years have received a fresh coat of paint. The game makes great use of music and sound as well, featuring a vast collection of music from throughout the series history along with the voice talents of Trey Parker and Matt Stone, the series’ creators. Battles and even exploring are punctuated with character banter that helps bring the town to life.

While South Park: The Fractured But Whole improves on Stick of Truth in a lot of ways, the whole experience feels somehow less grand. Although the game is slightly longer, probably lasting most players 20-30 hours, it doesn’t push the boundaries nearly as far as Stick of Truth, and the poor pacing towards the end of the game definitely detracts from the overall experience. That said, there are a huge number of highly memorable moments peppered throughout the game, and it’s an experience South Park fans won’t want to miss.