First released for the PlayStation 2 in 2007, Soul Nomad & the World Eaters is now available as the second part of the Prinny Presents: NIS Classics Volume 1 compilation. While RPGamers had additional opportunities to try out its compilation companion Phantom Brave, this marks the first time Soul Nomad has been ported or released elsewhere. The title features some interesting, if not entirely successful, tweaks to the SRPG genre. Unfortunately, this release of Soul Nomad is simply a bare bones port of the PS2 version with little to no quality-of-life or graphical improvements, leaving this unusually grim tale firmly rooted in the past.

Soul Nomad begins in a hidden village tucked away in the land of Raide, where two young villagers have their coming of age marked by being entrusted with weapons from the village elder to protect the land. Players control an unnamed silent protagonist who is given a black sword, which turns out to be possessed by an evil spirit. This malevolent being called Gig happens to be the foul-mouthed master of three gargantuan World Eaters who was defeated in battle 200 years prior, upon which he was sealed away within the sword and has since eagerly been plotting his revenge. Although Gig and his World Eaters have long been dormant, the giants have since re-awakened and the player is forced to rely on Gig’s powers to defeat the World Eaters. Facing the ethical quandary of utilizing Gig’s power against his own monsters to save the world, the protagonist also risks succumbing to Gig’s dominance to destroy the world. To Soul Nomad’s credit, players are given the option to stave off or indulge Gig’s blood thirst from the onset, with a separate path dedicated to those who wish to spread disorder throughout the land.

While the story is appropriately bleak, it isn’t particularly thorough or engaging. Players travel the world and attempt to quell the carnage of the World Eaters all while Gig loudly announces his diabolical machinations to the player. Gig’s polarizing character is certainly interesting and he’s the most memorable part of the game. However, the story too frequently suffers imbalance from overemphasizing Gig’s character arc and underemphasizing the supporting cast, especially the main protagonist. The duality of Gig and the player character, as well as their struggle to work with and against each other, would be compelling if the player character had any personality of their own. Instead, players are forced to deal with hyperbolic caterwauling from Gig juxtaposed with silence from his counterpart. While other story personalities attempt to strike a tonal balance, far too often the game suffers from this lopsided dynamic as well as stilted, dated humor. 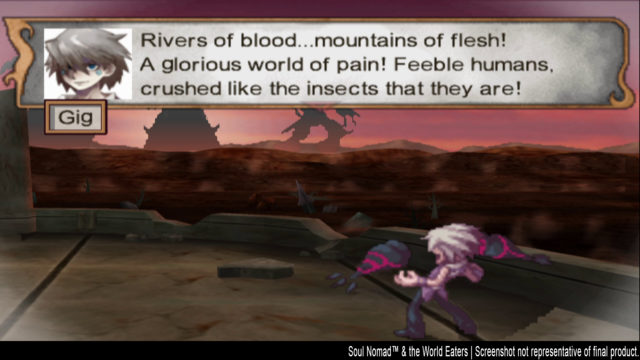 Gig is so over-the-top that other characters feel flat.

The gameplay loop will be familiar to fans of Nippon Ichi Software games, albeit with some changes to the method in which battle units are formed and trained. In battle, players must rely on Gig’s dominion ability, which allows him to subjugate other units who can then be summoned into battle. Before battles, these dominated characters are arranged into squads that are then summoned into battle and represented on the map by their squad leader. As each leader travels across the battle grid and engages with other units, the perspective shifts to a side view of the opposing units where players observe them engaging in largely automated combat. If a squad leader is killed, the entire squad is defeated and removed from battle.

To house these squads, Gig can generate rooms that feature a random number of spaces for dominated characters to occupy. Each room also has changeable decor that grants special effects to its inhabitants. If players do not care for the rooms presented, they can be regenerated until an acceptable one is found. After designing each room with desired units, players must then pay rent to summon each squad in battle. While there are seemingly endless possible combinations of rooms, it feels more akin to rolling dice than strategizing. Another drawback is the skewed emphasis toward setting up squads and away from deliberate use of individual units during battle, drastically limiting tactical choice in the heat of battle.

Soul Nomad demonstrates a willingness to experiment, although the end result is unfortunately more chaos. Combat units act according to their placement in the rooms, with little to no input from the player. This element underscores what is frustrating about the room system, as it greatly limits the player’s tactical options. Aside from players selecting where each squad goes, the battle system largely plays itself. Boss encounters can be exceedingly difficult and contingent on the player having the right types of room, further undermining the element of strategy. Players can at least take advantage of room inspections, wherein players fight random battles to upgrade each room and gain enough experience to allow them to bypass difficulty. 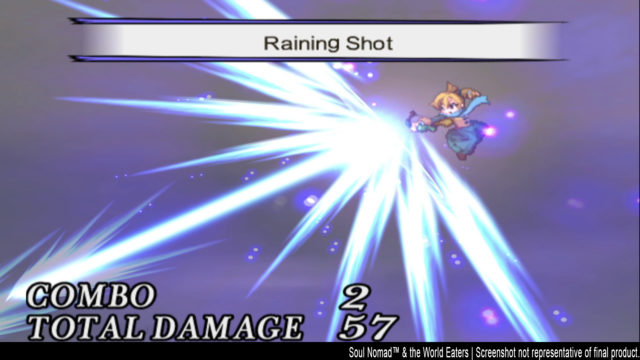 Get ready for some big damage combos.

Players would be forgiven for expecting a port of a fourteen-year-old game to run without major incident. Unfortunately, Soul Nomad completely falls apart on a technical level on the Switch.  The game crashes much too often: during story sequences, battles, or when saving the game. It’s unclear why this title specifically suffers from such instability; it is a shame, and worse, nearly game-breaking.

When the game is not crashing, its backgrounds are colorful and character portraits are well-drawn, but completely overshadowed by muddled character sprites that desperately need an upscale. The in-game text is up-scaled to go with the higher resolution along with some texture, but the entire graphical presentation is a calamitous disservice to the original game. The score by Nippon Ichi staple Tenpei Sato returns, featuring reliable if forgettable background arrangements and a few standout battle tracks. The game features dual audio tracks, with a serviceable English dub led by a standout Yuri Lowenthal as Gig. His performance elevates an aged script, but without a true foil for Gig, the overall narrative suffers from having an almost singular focus on him.

Comparisons to Phantom Brave may be unfair given the attentive improvements it has seen over numerous ports, but the lack of attention to Soul Nomad is more glaring in light of those changes. While the price point is somewhat indicative of what to expect, the haphazard approach to the most bare bones improvements is not encouraging to fans who may have been looking forward to future compilations. More disheartening is that in nearly three months since the release of this compilation, the game has not received a much-needed bug-busting patch or even a signal of intent to address the game’s more minor shortcomings.

Soul Nomad & the World Eaters can be appreciated for its varied gameplay options and alternate “bad ending” storylines, but the absence of quality-of-life improvements combined with technical problems on the Switch version make this a tough sell. Ultimately, it is difficult to recommend Soul Nomad, either as a look back into what 2007 had to offer or as an SRPG released in the current market as there are better options for your time and money.