Shiren the Wanderer: The Tower of Fortune and the Dice of Fate Review

A Rogue By Any Other Name

Shiren the Wanderer: The Tower of Fortune and the Dice of Fate is the latest entry in the long running roguelike series from Chunsoft, with this entry being localized by Aksys. Sticking to the traditional aspects of roguelikes, the series starts players at level one at the start of dungeons, and of course strips them of items and equipment should they fall in the middle of a dungeon run. The Shiren series, and this entry in particular, sets itself apart from most traditional roguelikes by giving a sense of persistence between runs, and even allowing items to be saved or rescued should a player fall. Players themselves can even be rescued by other players of the game. Combined with a simple story that fits the game nicely, Shiren is a fun and challenging adventure. It does unfortunately come with a number of annoyances, primarily some frustrating bosses serving as road blocks in the middle of the main adventure.

The game starts out with Shiren and his talking ferret companion wandering into a town where a young girl is gravely ill. Shiren eventually teams up with the young girl’s love to traverse the tower of fate to try and reverse the girl’s destiny. It’s a simple concept, but provides enough story and interesting dialogue to make the main adventure have some deal of context. It manages that perfect balance of providing just enough story, without it getting in the way of the proceedings. Minimalist stories are difficult to pull off without making a game simply feel devoid of story, but Chunsoft has done a pretty fine job at avoiding that.

Shiren’s gameplay is a purely traditional roguelike; a turn-based crawl through randomly generated dungeons. Players will traverse the game’s towers floor by floor, collecting items, battling monsters, and dealing with traps and other obstacles. Death means starting the adventure over, and losing all collected items, but Shiren provides a large number of ways to mitigate or completely avoid this loss. For example, towns along the way contain storerooms where players can leave excess items for future runs. The game also has multiple items, that are not particularly rare, that allow the player to escape back to the start of the adventure while keeping their entire inventory. The best feature by far though is a system whereby equipment can be tagged, and then retrieved on subsequent adventures if the player should lose them. This eliminates the frustration of losing upgraded or rare weapons and armor should the player have no means of escaping from their doom. 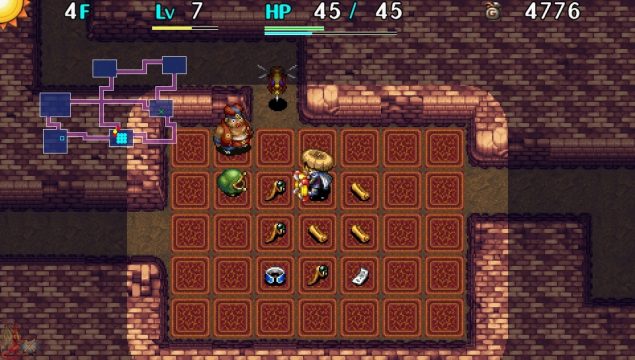 Shiren also features a number of NPCs that can assist along the way. The player can bring along two of these at a time, and once unlocked, are readily available for future runs. One of the NPCs is the boy previously mentioned trying to save the sick girl. He is Shiren’s constant companion in the main adventure, and will actually stay at the highest floor you’ve reached and await your return, serving as a nice note of how far the player has reached, and ensuring an NPC companion for the more difficult floors they have yet to reach. Though the other companions will simply disappear should they fall in battle, the boy is revivable using healing items. The one downside of this however, is the player will need to revive him in order to properly advance in the main adventure. So he can’t simply be left behind if players get stuck in a difficult to escape situation.

Despite these many perks, Shiren is by no means an easy game. In addition to health, players have a hunger meter that decreases as they progress, so food must be kept on hand to mitigate this. There’s a strength value that decreases from poison and other attacks that must be monitored. Players will also need to constantly level up as they progress, making sure not to skip too much combat, or they might end up being too weak for later floors. There are ample items and weapons for the player to find, and these must be used very carefully and strategically in order to navigate through the monster filled randomly generated floors. Monsters are aggressive and generally track down the player as soon as they are spotted. Deaths don’t feel cheap, but they will be plentiful for those who don’t think carefully.

The game features an interesting day-night cycle as players progress, where the night cycle requires players to equip a torch for visibility and uses special abilities instead of normal weapons. These sections can be quite harrowing, as the monsters hit much harder at night, and actually attack other monsters on floors in order to level up and become more powerful. Abilities are discovered as players venture on and are maintained between runs. A set number can be equipped and used once per floor, though uses can be refilled by eating rice balls. These sequences add a nice additional twist to the dungeons, and help mix up the long run through the game’s primary dungeon. 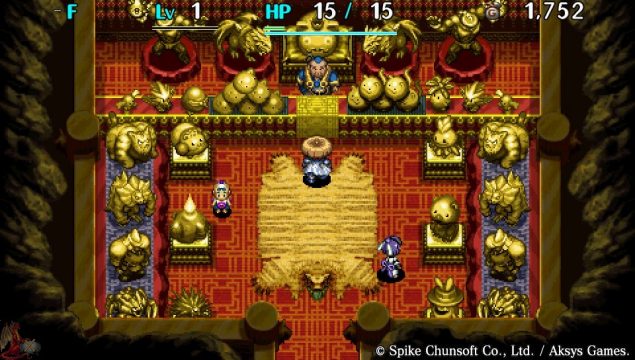 Partner characters are going to raise a little hell.

Flying in the face of the decent, challenging balance of normal dungeon floors, the game’s story features two bosses that feel completely out of whack with the balance of the rest of the game. There are only two in the main adventure, but they serve to color player’s experiences in a poor way. In the spirit of roguelike’s randomness, they have a set of abilities that they will use for every turn. Unfortunately, one of these is summoning monsters, so unlucky players will fail against the boss not because they were unprepared or used items poorly, but simply from being overwhelmed by a swarm of enemies. It makes these fights extremely difficult to prepare for, and annoyingly makes item use in earlier floors require a considering of the question “will I need this against the boss?” Even if the player lucks out and the boss doesn’t summon too many monsters, they still hit hard and have a large quantity of HP, meaning a large quantity of healing and attack items will be required even under the best circumstances. They end up being extremely frustrating roadblocks, dampening what is otherwise a great dungeon romp. Thankfully, at least, the first boss only needs to be cleared once, and then will be gone on subsequent runs.

It’s easy to see this Shiren game originally appeared on the DS, but despite this, its colorful sprites look great on the Vita’s screen, or even on a large screen via the PlayStation TV. There doesn’t seem to be much added in the way of visual fidelity, but there’s nothing wrong with the game’s varied sprites. On the audio side of things, sound effects stick to a classic style that wouldn’t be out of place on old 16-bit games, and to that effect many seem to be unchanged from the original SNES game and it’s corresponding DS version. They do fit Shiren‘s style well enough of course. The music does a great job of setting the stage for things, getting more ominous the further the player ventures into the game’s main dungeons, and sometimes stepping aside for simple ambient noise. Players will certainly want a good pair of headphones or speakers for this game.

Overall, Shiren the Wanderer: The Tower of Fortune and the Dice of Fate is a fun and entertaining roguelike with a few troublesome stumbles along the way. Fans of 16-bit style adventures will certainly enjoy its audio and visual style, and a number of post-game dungeons and challenges will keep players entertained for a long time beyond the game’s initial running time. Fellow roguelike fans will even begin to go on rescue missions for each other, providing further entertainment and of course softening the game’s tough difficulty level. Those interested in roguelikes, especially the ones in its purest form the Shiren series, and this game in particular, provide such an experience with enough niceties to keep the experience from being overwhelming. Hopefully this isn’t the last we see of Shiren in the West. 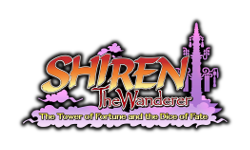