Shadowrun: Hong Kong is worthy continuation of Harebrained Schemes’ Shadowrun Returns series. It provides all the paranoid neo-noir thrills one would expect in a magically awakened cyberpunk megacity, without overlooking the human motivations of its inhabitants. While Hong Kong‘s precursor, Dragonfall – Director’s Cut, provides a better sense of world-building and team cohesion, comparison isn’t especially useful: the games work together and enhance one another. This familiarity with the world of past games carries over into the gameplay: Hong Kong combines tense tactical combat with an engaging story to provide a game that doesn’t offer many surprises, but is nevertheless masterfully crafted and executed.

Families, both biological and adopted, form the heart underneath Hong Kong’s tarnished chrome. A corporate security cop and his sibling, the player-created protagonist, meet in Hong Kong, responding to their foster father’s call for help. The pair quickly run afoul of the corrupt corporate law, and find themselves working with the local triad to keep their heads above water. While the siblings build the connections necessary to survive life a stone’s throw from the Kowloon Walled City, their investigation into the conspiracy surrounding their father leads through the labyrinthine dealings of mega-corporations and the spirit world. 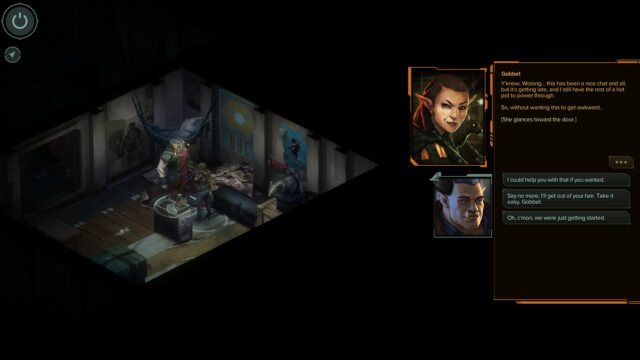 The Hong Kong of the future is a unique place, veined with corporate malfeasance and human need. The sense of place, as established by NPC conversations and sprawling, rainy streets, suggests the protagonist’s story is only one of hundreds in the world. Uncovering the mysteries of a missing father requires lots of conversation with the talented freaks and criminals who live in the shadows, and inevitably getting drawn into their stories. If the writing wasn’t so lively and marked with pathos, these conversations would be textual overload. As it is, there’s plenty to take in and learn. In spite of this conversational breath, there are fewer opportunities to explore than in Dragonfall – Director’s Cut. Although most missions have multiple paths and many can be completed in any order, there aren’t a lot of hidden objectives or side missions. A world with so many potential hooks and interesting characters invites further exploration, but players can only delve so deep before running out of game.

The best character development occurs within the protagonist’s team of shadowrunners. Pragmatic, irreverent Rat shaman Gobbet and blind samurai Gaichu, who wrestles with a mind-altering wasting disease, are the best. Dwarf decker Is0bel is less developed. Although there are several recruitable shadowrunners who aren’t related to the plot, they lack the engaging personalities and unique advancement abilities of the central team. The core team-members develop with the patent Shadowrun blend of grim realism and black humor, acting as extensions of their world.

Rain and grime are endemic to cyberpunk, but Hong Kong‘s environs mix it up a little. Rooftop gardens and an island made from squalid shipping containers help break up the ubiquitous scenes of wet concrete and fluorescent laboratory chic. Chinese architecture makes Hong Kong feel different from the cities visited in earlier games, especially in temples and other areas with strong feng shui. The exceptional soundtrack enhances this sense of place. It’s lurking and subtle most of the time, slowly ratcheting up the tension with a mixture of traditional Chinese instruments and electronica flourishes. The overall aesthetic is similar to earlier games in the series, but more refined. 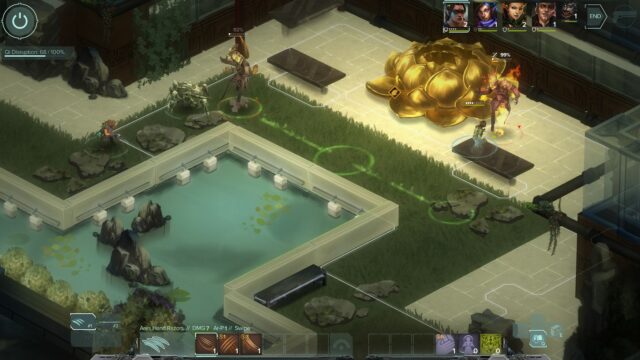 Harebrained Schemes’ refinement of the franchise is especially evident in its engine. The turn-based, tactical core remains the same, but it has been increasingly tricked out. Characters still move, hack, and fight using a pool of action points. Clever management of terrain remains integral to survival. This time around, spellcasters gain access to wild magic and spell foci, which provide additional combat options for a moderate fee. More robotically inclined characters benefit from an enhanced cyberware system, which includes new sparky bits and a specialized skill for managing them. Even the much-maligned deckers receive some love: exploring the Matrix is still the weakest area of the game, but it’s more enjoyable than past iterations. Infiltrating secure servers requires pattern recognition and timing to rush past security measures. Tripping too many alarms triggers combat, as in past iterations. Unlocking security hardpoints is handled through a timed memory minigame. This upgraded Matrix system is controversial among fans for adding reflex-based elements to an otherwise asynchronous game, but nevertheless makes stealth deckers feasible. Returning to the previous system is as easy as tripping the security measures and blazing through the defenses.

Shadowrun: Hong Kong offers a steady evolution of Harebrained Schemes’ Shadowrun experience. It’s such an enjoyable game that a director’s cut wouldn’t need to do much to boost it from an excellent, tactically engaging family conspiracy to a must-have. A handful of side missions would provide more time for the team to develop, especially with regards to Is0bel. On the other hand, in the realm of projects that have actually been announced, there is a final, post-game mission in the works. This extra mission promises to increase the thirty-hour playtime and answer loose ends. It won’t be enough to satisfy the craving for more, but that’s the way of the shadows: hungry and lean, a well-built machine. Jivebot out.