Scarlet Nexus marks another attempt from Bandai Namco at creating a new IP, with its development headed by a number of veterans, mostly known for their work on previous Tales titles. With an excellent combat system and a great visual style that permeates throughout, the game proves to be a highly successful venture. Despite a couple of minor detractors, it ends up as a very welcome addition to the company’s line-up and an easy recommendation to RPGamers.

Set some thousands of years in the future, Scarlet Nexus gives players a choice right at the beginning as to which character’s story to follow: Yuito Sumeragi or Kasane Randall. Both are new recruits to the OSF, a special force fighting against monstrous beings called Others that frequently appear and feed on human brains. Members of the OSF each have a special power (such as Psychokinesis or Hypervelocity) and are given an anti-aging drug to ensure that they can fight for as long as possible, given that those powers fade with age. There are definite thematic similarities to the God Eater series, but Scarlet Nexus still feels like its own thing, particularly thanks to its effective and consistent styling.

Kasane’s story is suggested for the first run through as it gets the most impact out of certain events, and also offers a more complete picture of what’s going on. Yuito and Kasane have their own separate goals and motivations for most of the game, but their paths intertwine throughout, with the two — and their allies — often coming into conflict in the process. The narrative has interesting ideas that are successful in some ways, but less so in others. There are many intriguing elements to the setting, but the game likes to speed the story along when it can. It ensures that there’s plenty of action, but certain crucial plot elements are just dropped in without having much build up, and players are often introduced to major elements about the world only as they become important. 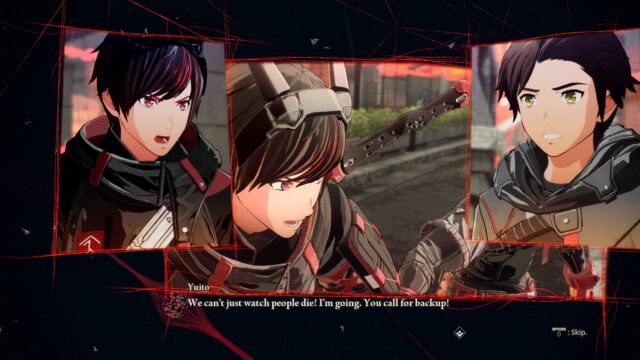 Scarlet Nexus has a distinct format to its event scenes, with most using a panel layout that gives the game a manga feel. Players can see the speaking characters’ portraits and the main action lightly animated in their own panels, with plenty of cuts to new camera angles and other panels as the scene progresses. At first, it strikes as a little odd, but the stylistic choice ultimately feels organic with the game’s aesthetic and direction. It also helps that the layout runs with one of the game’s main visual and narrative themes, the “Red Strings”, keeping it right at the forefront of player’s minds.

Players can expect to take about 30-40 hours for their first playthrough and add around half of that for the second should they use the New Game Plus option. Scarlet Nexus doesn’t quite justify the need for players to go through both routes to get all of the available story content. There’s not a huge amount of difference in the information dropped across the two routes and players are also working their way through the same locations in a very similar order. That said, there’s still more than enough for the story to hold interest when combined with the rest of game and it ultimately comes to a satisfying conclusion. The intriguing setting has prime opportunities for Bandai Namco to expand upon in the future.

Where Scarlet Nexus truly shines, however, is in combat. Yuito or Kasane are always controlled by the player as they fight against a good variety of others, each often requiring their own tactics or abilities to defeat. They are joined by up to two ably-AI-controlled companions and also have the ability to utilise any of their allies’ powers for a limited time through the SAS system. In addition, Yuito and Kasane share the Psychokinesis ability, which lets them fling nearby battlefield detritus at their opponents. This is important as many enemies need specific powers to overcome their own abilities, such as one that can turn itself invisible and needs players to use Tsugumi’s Clairvoyance to find or fast-moving flying enemies that need Arashi’s Hypervelocity or Luka’s Teleportation to hit. 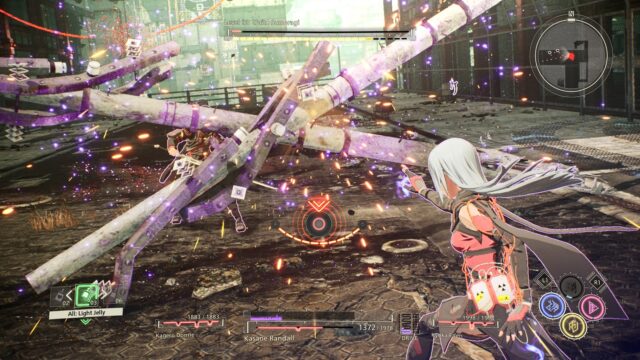 There are small differences between Yuito and Kasane’s combat styles, but they both control the same and players won’t need to alter tactics between them. Basic combat is driven by combos of physical strikes interspersed with using Psychokinesis to launch items at opponents as well as any other relevant abilities. Players can link combos and Psychokinetic strikes together for some incredibly satisfying beat downs. Enemy Others have both a health gauge and a Crush Meter, either of which can be depleted to defeat the enemy, with different actions usually affecting one more than the other. Targeting the Crush Meter is usually the most advantageous, as it confers potential bonuses, such as an extension to the current time players can keep using an ally’s ability.

Encounters are designed such that players will always have the necessary powers able to counter the opposing Others. Boss fights make for highly enjoyable and action-filled occasions, often having particular quirks, such as special abilities to counter or a piece of environment to make use of, that help make them further stand out. The final two major boss fights are worth noting for being incredibly memorable encounters. Players have access to various healing items, which can be quickly used with the D-pad, and can be revived by allies if said allies are in a position to do so. The Brain Drive mechanic provides some extra depth, giving players a temporary boost whenever its gauge is filled, and expands further into the Brain Field, which is a manually-activated overclock that is very useful for tougher encounters. Combat is an absolute delight throughout the game and even by the end of the second playthrough is never any less thrilling and satisfying than at its apex.

There are a few methods for character growth, which is complementary to the combat rather than being a key separate element. A basic level system affects all party members, as does a straightforward equipment system with players able to create and/or upgrade weapons and accessories. Yuito and Kasane also have access to the Brain Map. Whenever they level up, they gain some points to spend upon the Brain Map’s skill tree, which offers an array of passive bonuses or new combat abilities covering multiple elements of combat. 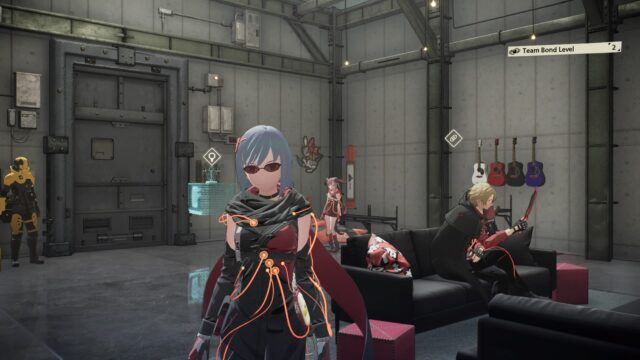 The hideout gradually gets busier as party members receive gifts.

The most interesting side content the game has to offer comes in bond episodes during the intermissions between each story chapter. Here, players find themselves back at their hideout and can see story events involving Yuito or Kasane and one of their allies. These events aren’t important to the plot, but they add some very welcome depth to each of the characters and world and their more relaxed pace is a nice offset to the main game. Completing bond events and giving gifts — most commonly obtained by trading with the Archivist who follows the party around wherever they go — will increase the Bond level of that character, providing additional SAS or combat bonuses, while the gifts will also get added to the hideout (and used) in a very pleasing touch.

On the other hand, the game’s side quests are disappointing. The vast majority of quests require players defeat certain enemies in a specific manner, and being able to this is often solely down to luck. The rewards for these side quests are also nearly always minor items that can be obtained elsewhere, so most players will quickly learn that these can be safely ignored without them missing anything meaningful.

The graphical style goes hand in hand with all of the other game elements to make Scarlet Nexus a highly pleasing visual experience. Designs throughout the game are fascinating, while the aesthetics come together across all facets of the game including the storytelling, the combat, the locations, and the user interface. The audio is strong throughout; the English voice acting adds to each of the characters and the music is both enjoyable and nicely varied, including one particular standout boss track that injects some electro-swing into proceedings.

Scarlet Nexus is an easy recommendation for anyone looking for an exciting action RPG. Though the narrative is varied in its effectiveness, it still complements the rest of the game effectively. Dazzlingly stylish with a superb combat system, Scarlet Nexus is a memorable new title that is huge fun to play throughout. As a new IP, Scarlet Nexus should be considered a great success with lots of potential going forward.