A Bittersweet Romance at Best

“You’re playing it like a regular JRPG. Stop doing that.”

This was the best summation of Romancing SaGa 3 that I could find, given as advice to a SaGa series newcomer. The game features the same open-world, non-linear storytelling and free-form character progression as its predecessors, which is good news for series veterans. For all others, however, this game is a plunge which shouldn’t be taken lightly, particularly since this remaster marks the first time it’s been available outside of Japan, expanding its audience.

One should not expect a complicated and intriguing narrative from a SaGa game; being able to choose from eight starting characters, each with unique story elements, might sound like there’s some deep connective tissue to delve into, but that’s never been the case in this series. Instead, after a fairly brief linear intro chapter that varies by character, the world opens up to explore as the player sees fit. There are towns to visit, caves and dungeons to explore, and people to meet. Occasionally, this will result in stumbling upon one of numerous side quests, often triggered by talking to the right person or being in the right location. There is, of course, an ultimate goal consisting of standard “stop the bad guy and save the world” JRPG trappings, but over the course of most of the adventure, this is largely pushed aside unless the player decides to abandon the current course and steer toward the endgame.

Unfortunately, the side quests aren’t very fulfilling, and often far too brief and underdeveloped. There is no intriguing web of interactions to build up lore and backstory; a situation is encountered (often by accident) and dealt with, generally by defeating some monsters in a certain location. A few cursory text boxes serve to introduce the conflict as well as conclude it, and that’s it; a reward might be gained, a party member might join up, but other than that the episode is never referred to again, and is of little to (usually) no consequence to the main quest or world in general. 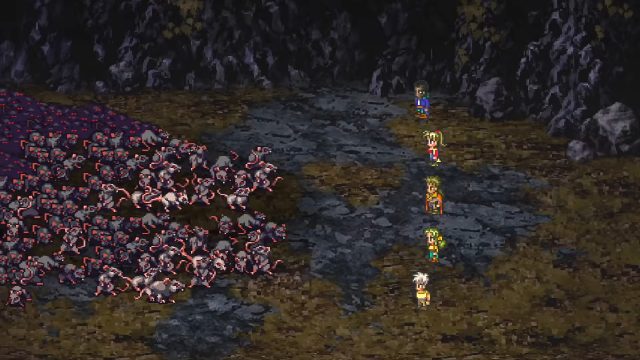 The Rat Mischief boss is arguably one of the more interesting, at least design-wise.

This lack of development is especially felt in the characters. Outside of the eight starting choices, there’s a rogue’s gallery of over twenty optional party members to find and recruit, and the overwhelming majority of them are woefully underdeveloped and, therefore, far too uninteresting. That isn’t to say they’re cookie cutter in design — far from it. Among the recruitable suite of party members are a martial artist lobster, a sentient snowman, and a blue bipedal elephant. One particular town features an event that lets the player witness a masked caped crusader become overwhelmed by some of the local thugs, and intervene on his behalf. A vigilante crime fighter makes for an interesting break from standard genre character tropes, but whether he is recruited after the scuffle or not, this scene is the first and last bit of development he ever gets, despite there being some fertile ground for an interesting story to tell. Even the town’s other citizens seem to have forgotten all about this episode once it’s passed, as it is never referenced again. This is, unfortunately, par for the course with just about all of the game’s events, making them feel as if they’re happening in a vacuum.

With its open-ended design philosophy, the game frequently feels far too aimless, the pacing rarely ever satisfying. Most areas can be handled at any point, as most enemies scale with the player party, so that entering a dungeon may lead to entirely different, still challenging encounters at different points in the game. The exception to this are dungeon bosses with set power levels that mean players could very well be woefully under-leveled for the encounter. Of course, players won’t know which the case will be until they actually get to each boss, so there’s a good bit of trial-and-error in store.

A particularly grievous example of this is Romancing SaGa 3′s endgame. The final dungeon can be taken on fairly early, about twenty hours into the game. The last boss, however, is more than capable of wiping the floor with any player that has been exploring rather than grinding, swapping newly-recruited players into the party frequently rather than building up a core stable of combatants. It takes a focused plan of attack starting in the early game to reach an end swiftly, or else hours and hours of further grinding (and perhaps a guide). It’s not a very forgiving system, and those new to the SaGa formula face the risk of burning out on it. The save-anywhere system even makes it possible to get trapped in an impossible-to-win endgame scenario, caught off guard by the brutal difficulty spike. 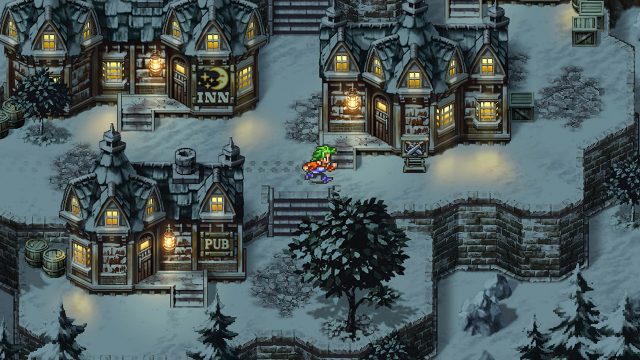 One would be forgiven to think the game is like any other JRPG of the time based on its looks.

To the game’s credit, the grinding is at least fairly engaging, thanks to the combat system. In true SaGa fashion, experience points aren’t accrued and levels aren’t earned in traditional fashion. Instead, individual character stats, like HP or weapon proficiencies, randomly increase after a victory. The stat bumps are incremental, but there’s rarely a battle that goes by without at least one party member earning some sort of improvement. This steady drip of rewards is further enhanced by characters “sparking” during battle, essentially discovering new offensive or defensive abilities to add to their repertoire. Once a skill has been learned and mastered through use, it can even be instantly taught to other party members, which is a nice way to quickly buff up underpowered party members with powerful offensive techs. But since there is no traditional world traversal — traveling from place to place is handled by simply selecting a location on the map screen — grinding also means visiting some of the same dungeons over and over.

In general, however, bringing new characters up to speed to run with a well-oiled crew is a laborious process, requiring more grinding since weapon and magic stats slowly increase through repeated use in battle. Mages, then become stronger by constantly casting spells, and so forth. At some point, each character becomes locked in to a particular progression path; late-game lineup or strategy changes come with prohibitively steep time requirements. Certain party members even have the bothersome habit of making themselves permanent fixtures, refusing to be bumped out of the line-up to make room for another character. As with all aspects of Romancing SaGa 3, putting together a solid party works best with knowledge from past runs or with a guide in hand. Making use of the best strategies and gaining access to the most powerful abilities require a serious commitment and an expert understanding of the combat system’s ins and outs.

Figuring out these and other gameplay features is a far more obtuse process than it needs to be, making Romancing SaGa 3 one of those games that really benefits from several thorough readings of the instruction manual. By switching the main character from the active battle party into the single reserve slot, a special Commander Mode becomes available in which characters act on their own. Various battle formations provide powerful stat boosts at the expense of others, providing an edge in battle. Battle formations even have powerful attacks that can only be unlocked in Commander Mode. There is also a strategy mini-game for players to participate in at various points throughout the game, depending on which main character was selected. Though some of these features have merit in battle, the whole thing feels like everything was thrown at the wall to see what stuck. 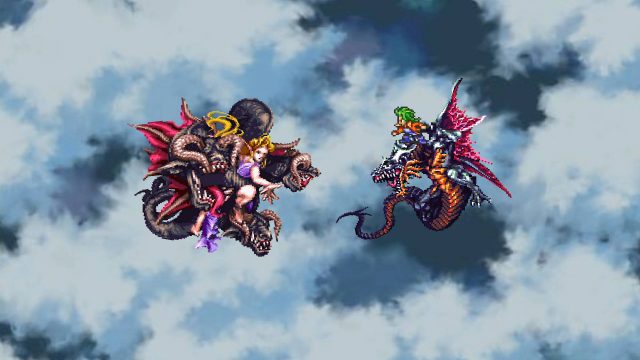 There are some cool possibilities tucked away in the deepest recesses of the combat system, if one can suss them out.

Romancing SaGa 3 is built with replayability in mind. The myriad side quests and recruitable party members, not to mention the eight main characters with their unique stories and gameplay elements, as well as the high degree of combat customizability practically beg for repeat run-throughs to try out different strategies. With that in mind, the designers have implemented a New Game Plus mode that, interestingly, is available from the very beginning; players can abandon the current run and begin anew, carrying over skill levels, tech, stats, money, as well as a few other things. Players who enjoy tinkering with different party builds will be satisfied by this addition. It’s even possible to face a far more powerful form of the final boss for a true test of skill, though how to determine which final boss form appears is a bit nebulous and, again, may require a bit of research in order to avoid being ground into the dirt by unwittingly facing the more powerful version the first time through.

This newly-released version of Romancing SaGa 3 does feature quite a few graphical updates, though these improvements stay within the 16-bit realm and give the game a facelift while retaining its retro feel. Backgrounds, environments, effects, and even sprites do look markedly better than they used to, and enemy designs, which are quite good despite liberal use of palette swapping, have been retained. Series composer Kenji Ito is once again responsible for an outstanding soundtrack. Many characters and locations receive their own dedicated themes, though battle and generic town themes are on frequent repeat during grinding sessions. With over sixty tracks spanning different dungeons, bosses, and events, every step of the journey is accompanied by memorable tracks that stand tall with the best the era had to offer. It’s playful, emotional, dramatic, somber, and overall immensely enjoyable, and worth listening to even outside of the game.

Romancing SaGa 3 looks and sounds just like the very best RPGs the 16-bit era had to offer, particularly with its rerelease facelift. But its approach is far different from what many RPGamers of that time are used to, and it takes quite a bit of adjustment, research, and grinding to make the jump. Changing gears mid-race is made more frustrating than it needed to be, particularly since the game itself is built around tinkering with party builds, and then scrapping it all and going the route of New Game Plus if it doesn’t work out. Underneath it all, however, lies an engaging combat system, though it’s a shame the story and writing under-serve what could have been an interesting world and cast of characters. Romancing SaGa 3 is certainly worth a shot, but it’s best enjoyed by those who come prepared.