Remnant: From the Ashes Review

From the Ashes Comes Growth

There is plenty to be said about the looter shooter, a subgenre born of Borderlands and popularized this generation with the likes of Destiny, The Division, and Warframe. The concept is simple: mix first-person shooters with the addictive loot wheel of games like Diablo, adding an additional layer of direct control over the character while offering a consistent sense of progression, where every dead enemy can potentially spill out a cool new weapon. The inverse of this is something like Dark Souls, where weapons and armor are mostly static but can be made stronger through materials found throughout the game. Remnant: From the Ashes falls somewhere in between these two models and manages to be successful in this blending of ideas. Built on the back of a rock-solid combat system, Remnant provides a full experience whether playing with friends or by oneself.

An apocalyptic event has introduced a strange race of creatures known as the Root, who have driven humanity to the edge of extinction. Seeking answers to what is believed to be the source of the Root, the player crosses the sea hoping to find a solution to the problem. Before long, the player finds themselves in Ward 13, an underground research station that houses the World Stone, an artifact that allows passages to other dimensions. Tasked with finding a way to bring an end to The Root, the player is given access to the World Stone and begins a world-hopping adventure that will bring them to alien lands and ruined civilizations. Oftentimes, games like Remnant are not overly concerned with storytelling, but a good amount of effort and detail went into the world-building. Many of the game’s characters are surprisingly fleshed out and have plenty to share about the world, which is an effective mix of alien cultures and humanity fighting against increasingly difficult odds. It’s an entertaining world to get lost in. Somehow, it all comes together. 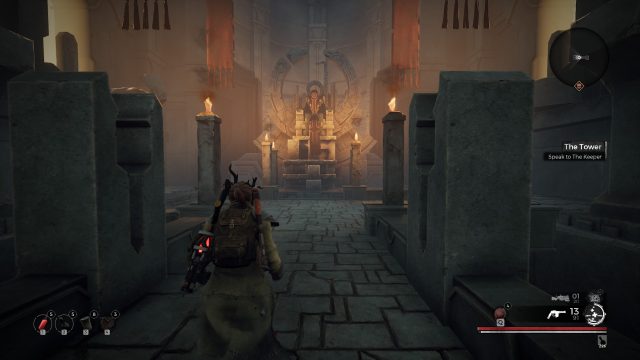 Welcome to one of the many temples of Remnant.

If only the actual act of exploring the world was as engaging. Remnant sports a unique campaign, where procedural maps are generated at the beginning of a new game, occupied by random events and a handful of bosses that change from campaign to campaign. While the game will always hit biomes in a certain order, the maps themselves, the events within, and the bosses are mostly randomized. This means that in any given campaign players will see about sixty percent of the game’s full content, which is a decent push for replayability. However, this does leave the level design with a lot to be desired. Each of the biomes is distinct from the others, but level layouts fail to go beyond similar-looking combat zones connected by long corridors. There are some fun discoveries to be made, like a character interaction or a new Trait to unlock. The repetitive and flat layouts of the levels themselves are one of the biggest knocks against the game, turning what should be an exotic universe into a boring trek across primitive zones.

Fortunately, the actual combat of the game is an absolute knockout. Players can switch between shooting and melee on the fly; a single attack button is used for melee and shooting attacks, with the aim button acting as the toggle. The shooting is precise and the guns feel appropriately hefty. Melee weapons feel a bit light by comparison, but work well in a pinch. Just don’t expect to have a lot of build options focusing primarily on melee. Guns use ammunition, but enemies frequently drop ammo so that it never really feels that tight. Each gun can also contain a weapon mod, an ability that charges with use of a weapon. Once filled, the mod can be activated for a special ability that ranges from offensive to defensive to support. 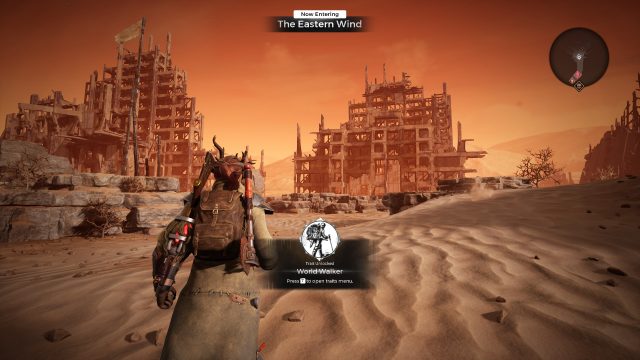 Despite only a handful of different environments, each manages to be striking and memorable in its art design.

Three weapons are part of a loadout: one primary gun, one small sidearm, and a melee weapon. Likewise, armor is split into three distinct categories: the head, the body, and the legs. Players can mix and match armor, which each has its own passive ability shared with the others in the set, but every complete armor set has set bonuses that will likely inform playstyle. Rounding out equipment are rings and amulets, which provide passive buffs. The last thing to consider when building a character are Traits, which provide further passive buffs using points spent from leveling up. The only actual benefit to leveling, Traits offer minor benefits per level and most are earned as a result of beating certain bosses or completing certain side quests. While there are many of them, most of them are straightforward and simply add one extra wrinkle to a character build rather than providing a sense of personalization.

What makes Remnant different form other looter shooters is that, except for the starting equipment which can be purchased early in the game, nearly all equipment is discovered as randomly placed loot or as a reward for defeating a boss or a puzzle. Given the random nature of the world in each campaign, not every piece of equipment will appear in each campaign. While this could feel constricting for those more used to the freedom of random loot drops, having a new, distinctive weapon after every boss feels rewarding, and every weapon earned feels well tuned and viable to use. In lieu of weapon and armor drops, enemies drop money, crafting materials, and ammo. Crafting and upgrading new weapons works the same as in Souls games, where bosses drop unique items that can turn into unique weapons and tiered upgrade materials exist to reinforce existing weapons for use throughout the whole game. This creates a grind in the later parts of the game when trying to experiment with new weapons, but allows for favored weapons to remain useful through a whole playthrough. 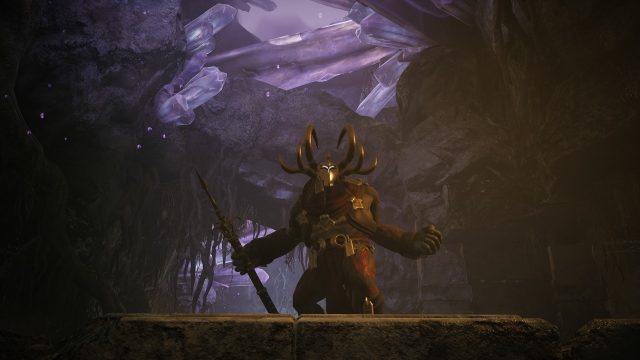 Most of Remnant’s bosses have an incredibly cool design.

All this comes together to make for a strong experience, particularly for game that utilizes its limited scope well. The only other major complaint for the game comes from its many bosses, which tend to be very hit or miss. Most of the bosses in the game, which are designed with multiplayer in mind, rely on bringing in additional enemies during the fight, both to provide opportunities to refill ammo and to complicate the admittedly simple battles. Sometimes this adds an engaging layer to a fight, but other times it serves to make a fight more aggravating, especially when playing solo. With a group it functions in a more manageable fashion, but often the rate at which the extra opponents arrive can feel overwhelming. This culminates in a frankly terrible final boss, which suffers less from adds and more from a wonky design that makes it incredibly difficult to beat using certain builds. It was the first and last time in the game the build I was using felt insufficient for the task and required me to upgrade a few new weapons to beat it. It’s unfortunate the game ends on such a sour note as the rest of the game is incredibly strong. On a technical level, the game isn’t going to set any new visual standards but they get the job done. The game runs very well except for one biome, where there was noticeable and consistent slowdown. The music is unmemorable, leaving little impact after having finished playing.

That strength makes Remnant an easy recommendation. The combat is solid glue holding together a solid product, offering some fun cooperative shooting and a good amount of interesting items and weapons to build. Gunfire Games has already supported the game with two new modes and hopefully post-launch support will continue. While those who need a constant influx of new loot to parse through may find this game a bit on the slow side, those who are more familiar with games like Dark Souls may feel more at home here. The experience isn’t a perfect one, but there’s plenty to love in Remnant and excitement to be had in its future.