Pirates, but in Space

Double Damage Games, a studio founded by two former developers of Diablo and Torchlight, steps away from fantasy and leaps into space for its debut title, Rebel Galaxy. In another step away from the aforementioned titles, Rebel Galaxy takes a more deliberate pace, focusing on more strategic ship-to-ship combat and privateering over straight-out action. It’s a game very much devoted to the idea that space will be the future equivalent to the Wild West, and while Rebel Galaxy lacks inspiration in anything other than combat, it can’t be denied that it focuses on its strengths.

The game puts the player in the role of a generic spacer who recently received a message from his space-faring privateer Aunt Juno, who disappeared immediately after sending it. After meeting a few parties in the search for Aunt Juno, players come across an AI construct named Trell. Unfortunately, Trell lacks her memory, but it is soon discovered that there are a series of MacGuffins dotted around the procedurally-generated sector of space that will restore it. This leads to a series of missions featuring first generic space pirates and gangs, then a generic space cult, and finally a generic set of alien invaders. It’s all very shallow and really feels like an afterthought, with a completely forgettable cast of characters.

Rebel Galaxy features faction alignments, but the game does a poor job in offering any real benefit in getting in the good books of others. Alignments are generally raised through missions, though citizens and the militia will appreciate assistance offered for distress calls, and are unsurprisingly lowered by blowing up said alignment’s ships. Players can hail ships but the conversations, if they can even be called that, always amount to the exact same set of options for the select few dispositions of ship: trader, militia, or pirate. 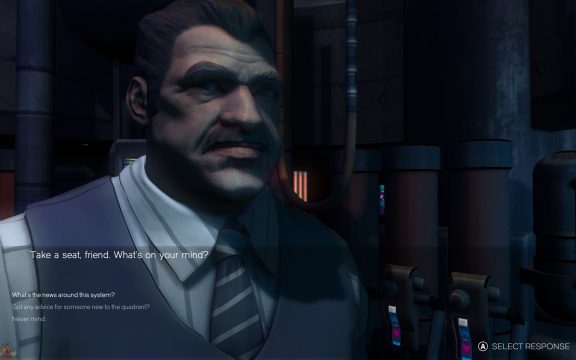 His name may as well be BarkeepClone542.

Missions can be found at various space stations dotted all over the place, which also act as trading hubs for resources picked up via mining or, more usually, dropped by blown-up ships. Though sadly the way everything is procedurally-generated means all the missions are by necessity pretty generic. The more thoughtful missions require players to find certain resources themselves, but it’s usually just more effective to take those that require players to blow up things or carry out straightforward deliveries (which will see players beset upon by pirates that need blowing up at some point near the destination anyway). Players can choose to go mining for their credits instead or try their hand at manipulating the fluctuating trade market, but they are both time-consuming processes that are less rewarding than the more violent options.

The difficulty balance makes it impossible for players to just blitz through the story missions. After every couple of story missions some time needs to be spent earning credits in order to upgrade the ship, lest it be immediately outmatched by what awaits in the next area. On the plus side, the balance enables a strong feeling of progression as ship types that were problematic before soon go down quickly. Players can recruit an AI-controlled partner and their ship to fight from stations — again a fairly generic and uninteresting bunch — who hold their own early in the game before being relegated to cannon-fodder in later missions.

If not already apparent from the review so far, Rebel Galaxy really is mostly about blowing enemy ships up, and fortunately the game does that rather well. There’s a decent selection of weapon types to choose from, divided into three groups: broadsides, turrets, and ordinance. While only one set of broadsides and ordinance can be equipped at once, players can mix and match as many turrets as their hull choice allows. Players are given control of ship movement (on a 2D plane, though it will go above and below enemy ships and certain obstacles) and targeting of one of the weapon types. This is usually the broadsides, though players can choose to take control of turret aiming instead if that is more useful for the situation. When not being aimed manually, individual turrets can follow AI target priorities set by the player, such as aiming only at fighters, though no such option is available for the broadsides. 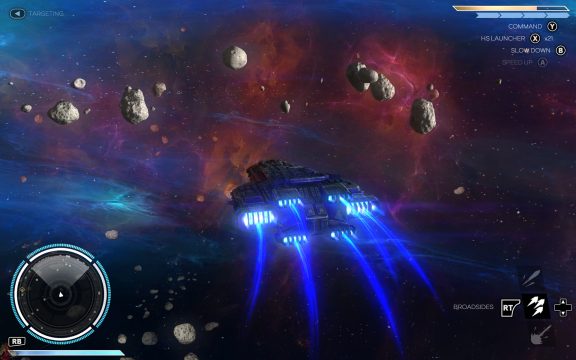 Overall, the combat and controls are generally strong and enjoyable. The biggest difficulty usually comes from aiming the broadsides while keeping track of where the ship is going simply due to the requirement of having to look sideways to aim them. In terms of health, every ship — including the player’s — has both shield and hull defences to get through before “proper” damage is done. Combat features a good amount of controlled chaos requiring both strategic thinking and on-the-fly reactions, but the lack of variation elsewhere causes things to become repetitive quite quickly into its fifteen-to-twenty-hour completion time, as battles frequently follow the same basic structure.

Rogue Galaxy is another game to ably convey the potential majesty of space, ship designs are nice and varied, and during combat there’s usually plenty of things going on with impressive effects all over. The music chosen by Double Damage Games for Rebel Galaxy has been pretty accurately described elsewhere on RPGamer as “galactic western butt rock”. It actually fits pretty well within the overall theme of the game though, giving apt backing tracks while travelling from place to place while delivering goods or undertaking jobs. Voice acting is passable, though the audio alerts from the ship can frequently be incoherent due to the effects used to make them sound AI-like, especially when other sound effects are going on at the same time.

For those who just want to spend plenty of hours going around showing other ships who’s boss, Rebel Galaxy is an ideal proposition. However, those looking for anything particularly substantial in other aspects are unlikely to find much depth lying in wait. Considering the size of its development team, Double Damage Games has found a good, if nowhere near universal, amount of appeal. 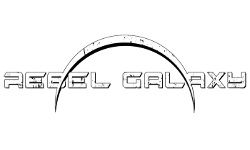