A Blatant Disregard for Astronomy

Baldren is not popular on Rainbow Moon. Searching for his nemesis Namoris in a mysterious forest full of inter-dimensional portals, he finds himself taken by surprise and knocked into one of the gateways, transporting him to the titular planet. Unfortunately he has not travelled through the portal alone, having been followed by an army of fiendish monsters and thus earning the ire of the local townspeople. To clear his name Baldren needs to help vanquish the monsters and find a way to return to his own realm in a lengthy quest that takes a few trips over the border between enjoyment and tedium.

Rainbow Moon gives players control of Baldren and his eventual collection of companions, all of whom can be renamed if the player wishes. There is a rudimentary plot with brief one-or-two sentence backgrounds for each part of the main quest, and a good number of the game’s sidequests, that serve their purpose of giving the location of quest-related items. Gaining new characters is a simple matter of advancing the main quest past their short points of involvement, and once they have joined they will follow the example of Baldren and remain forever silent outside of battle cries. To be fair on Rainbow Moon, however, it is made abundantly clear from the beginning that story and character interaction was never going to take priority over battles and dungeon crawling, and the lack of story allows the game to focus more on these two aspects.

Battles themselves follow a fairly standard grid-based SRPG template with a few defining characteristics: players are limited to a three-member party often pitted against twenty or more foes, and the prevention of any skill being used if it will harm a teammate in addition to the opposition. Characters go in turns with the order dependent on the speed attribute. Taking any action, such as movement or skill usage, requires one turn. After doing so the player is able to forego further action in favor of defence until the character is next able to act. Most of the appeal in Rainbow Moon‘s battles is gained from the speed at which turns proceed, resulting in the vast majority of battles being over fairly quickly in order to keep the game’s exploration moving along at a good rate. Players will gain the use of characters who excel at either melee or ranged disciplines, while new abilities are purchased from stores instead of being learned through character growth. Some of these skills allow the choice of which squares they target, although the game doesn’t make this ability as apparent as would have been most helpful. 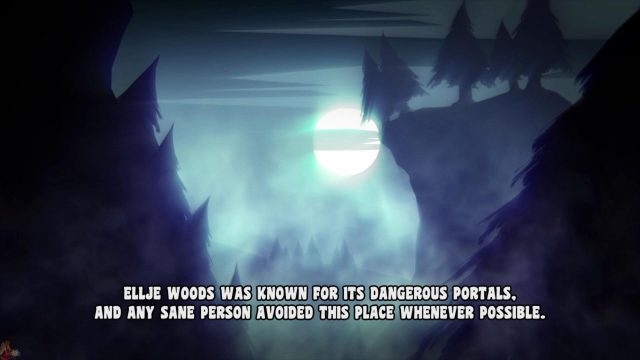 Baldren fulfills the “idiot protagonist” requirement before the game even starts.

While the speed of action in the vast majority of battles is refreshing and helps keep most of the exploration flowing nicely, there are a few frustrating areas to be found in the battle system. Most noticeable during boss fights is the huge impact of the random enemy starting positions on battle difficulty, leading to many resets of certain battles until a favourable starting situation is found. On the whole, however, the difficulty on the normal setting is well-balanced, so that for the most part there isn’t much requirement for grinding outside of fights available through standard exploration — with the final boss being an exception to this rule. Another source of potential annoyance comes from the assignment of directional controls on the isometric battle map, which means that moving the analogue stick up or pressing up on the d-pad will cause the character to go up-right. Unfortunately without constant vigilance it becomes easy to accidentally press the wrong direction and ruin a turn.

Character advancement is done through a combination of the standard level-gaining with new equipment purchases system, and allowing players to spend the Rainbow Pearls earned in battle on attribute improvement. Rainbow Pearls are earned for characters dealing the finishing blow on enemies and cannot be shifted to anyone else, which effectively discourages the player from trying new party members much. The equipment selection is disappointingly linear considering that the game visually shows what each new piece of equipment looks like on a character: instead there will usually be just one new equippable item for each slot a character possesses. Rainbow Moon‘s hunger and light systems are also a bit of a misfire, theoretically requiring players to consume food occasionally to prevent attribute losses and use items or spells to observe more of the dungeons. It’s not at all difficult to keep food levels up and dungeons lit, so these quickly become very repetitive tasks. All of these systems do add to the game, but each has something lacking in the execution.

Exploration is pretty enjoyable, as both the world map and dungeons have plenty of nooks and crannies to investigate, although generating a 3D map of a couple dungeons in one’s head will probably serve to bring on a headache. Graphics are decent, with pleasant, varied, and cheerful scenery in the overworld offset by dungeons that have architectural and visual styles that are pretty much the same despite the good mix of layouts. On the audio front Rafael Dyll’s soundtrack is an enjoyable listen, gelling with the battles and locations excellently, and the sound effects and battle cries punctuate the action well. The only complaint about the sound is that there is no option to adjust the balance. Music and sound effects can each be turned off if so wished but there is no option to reduce the volume of the music, which players may want to do as it can drown out the sound effects quite easily. 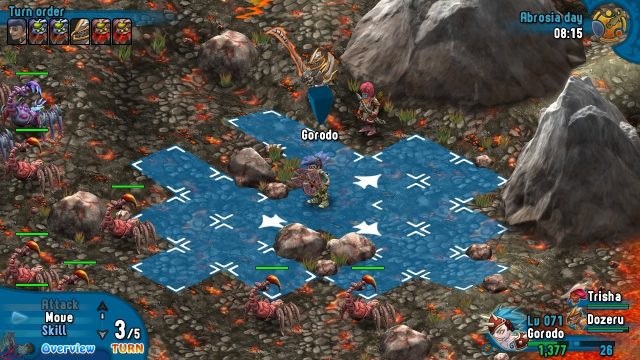 The main quest will easily last for forty hours, although time may need to be added for grinding before the final boss, who is several levels above that required for the penultimate story fight. This lengthiness has both plus and minus points. The positive is that players definitely get their money’s worth from an initial game price half that of most major console releases. However, the repetitiveness of the game does whittle down on the overall enjoyment, and the tedium is exacerbated horribly about twenty-five hours into the main quest where a natural ending is ignored so that the game can spin its wheels. Vanquishing the final boss does unlock a large amount of end-game content for Rainbow Moon so those for whom the repetitiveness has failed to negate the fun need not fear the experience is over, especially those who like to see statistics increase almost exponentially in the style of Disgaea.

A Rainbow Moon enjoyment-to-time graph is anything but smooth. It may take a couple of hours to get into its stride, while at the high points players will find hours have just disappeared. However, those peaks are accompanied by a number of valleys when tedium kicks in. Despite its flaws Rainbow Moon is a decent option for fans of the SRPG genre at a very approachable initial price. Those unable to cope with a more repetitive experience may not be able to appreciate its full appeal, but the quick battle system makes it easy to at least wile away a substantial number of hours. With room to introduce a bit more depth to the overall game, SideQuest Studios has set up a solid platform that will be interesting to see if it can be built upon.