Back in the early days, I skipped two generations before returning to Pokémon Diamond, which I found to be a mixed title; it brought new and iconic Pokémon, such as Turtwig and Bidoof, while serving up an unbalanced gameplay experience. Fifteen years later, a trip back to Sinnoh with Pokémon Shining Pearl, means the rollercoaster of emotions, mostly frustration, that come with visiting the region are back. Pokémon is always a great way to deal with depression, and I had hoped that the game would cure my blues. It did for a while until I was reminded that nothing had truly changed in this remake from the original.

As usual, players are trainers tasked with researching Pokémon by Professor Rowan. Their best friend, also roped the same job, spends much of the game driving the player crazy because they too want to be the very best that no one ever was. Collecting eight badges and taking on the Pokémon League is the ultimate goal, but there’s also the issue of Team Galactic, whose goal is to tear down the current world and make a new one for… reasons. In terms of antagonists, Team Galactic has always been unmemorable, and Shining Pearl simply offers a reminder of how ill-conceived its goals are and serves to underline the ridiculousness of a twelve-year-old being able to single-handedly take on a group of terrorists.

While the game’s storyline remains the same mediocre quality as the original game, there’s something downright charming about the localization, which does a fabulous job of bringing the world to life and makes up for the game’s lackluster and occasionally confusing plot. It’s always fun to read what townspeople are saying, or see how challengers react to losing. 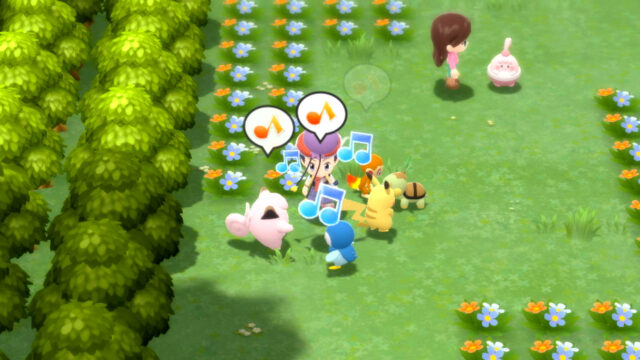 Look at all my best friends!

The core gameplay of Shining Pearl is the same as the rest of the series. Players collect Pokémon and battle their way through each rival to build up their Pokémon’s level. Every Pokémon has a type, as well as a type of weakness, which is more reason why players need to be aware of who and what they are battling. As players catch new Pokémon, they can carry up to six with them on hand for battles, each varying in type. One of the player-friendly features is that once a player has battled against a specific type of Pokémon when they battle that Pokémon again, information is displayed as to whether the player’s Pokémon have moves that are super effective, effective, not very effective, or have no effect at all. This is incredibly handy making many battles against repeat offenders a breeze. Pokémon has mastered the addictive gameplay loop, and Shining Pearl is no exception.

What is also compelling is the Grand Underground, which is introduced to players once they obtain the Explorer’s Kit in Eterna City. This amazing underground can be accessed anywhere on the map, and it opens so many possibilities in terms of unique Pokémon to catch. This area can be played online with random players or friends, or can be explored entirely on one’s own. Delving into the area also can net players rare items, and it’s a great place for players to grind if at any point they feel under-leveled. The Grand Underground is also important for catching Pokémon in the post-game as well.

HMs also work differently in the game, and for the better; rather than having to force a single Pokémon to be tied up with specific moves tailored to exploration, wild Pokémon now appear to assist trainers in various tasks such as climbing a waterfall or cutting down trees. This is a welcomed change as it gives players the ability to outfit their Pokémon with any skills they desire without having to lose a slot for HM moves. Thank you wild Pokémon, your hard work doesn’t go unnoticed! 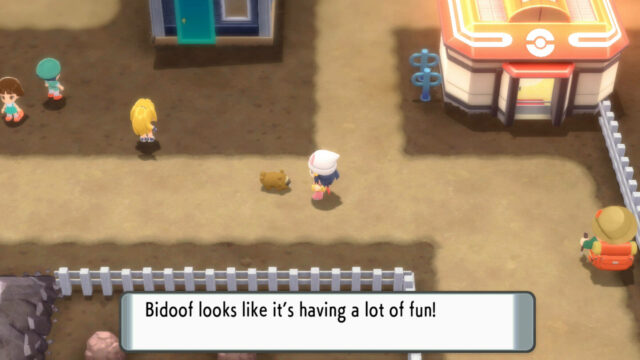 Bidoof is all about having fun!

Despite those positives, Shining Pearl suffers from two very large issues: constant backtracking and unbalanced difficulty. The amount of backtracking between areas is highly excessive, and it compares unfavourably to other titles in the series that much more effectively kept players going forward in a semi-circular pattern. Players constantly are going back and forth across the map because the placement of different towns and areas is all over the place, and given Fly comes around halfway through the game, simply traveling from place to place can be a bit of a time sink.

The unbalanced difficulty is the other offender and a holdover from the original game. Shining Pearl is incredibly easy for the most part until players hit the Elite Four. While the Elite Four isn’t super challenging, players will get the beating of a lifetime in the form of the Champion, Cynthia, and her Garchomp that knocks out the majority of Pokémon in one hit. Those who played the original games are aware of brutal Cynthia’s team is, and unfortunately, this was not rebalanced for this remake. Even if players feel like they are at the right level for the Champion, there’s still always a huge chance for failure. Balancing was never the Sinnoh game’s strong suit, and not rebalancing Shining Pearl and Brilliant Diamond is a missed opportunity on ICLA’s part.

The Sinnoh games also face the issue of a comparatively small roster of Pokémon to choose from. While there is a lot of standout Pokémon in Shining Pearl, there is also a lot of familiar creatures as well. While wild Bidoof earns a lot of love for taking on HM chores, the charming Pokémon starts to lose its luster when you realize it’s found on every single route, and until the Underground and post-game opens up, there’s only a small selection of Pokémon to catch. It would have been nice to have a good mix of old and new, and it feels like there aren’t many new Pokémon to discover without having to go into the Underground. 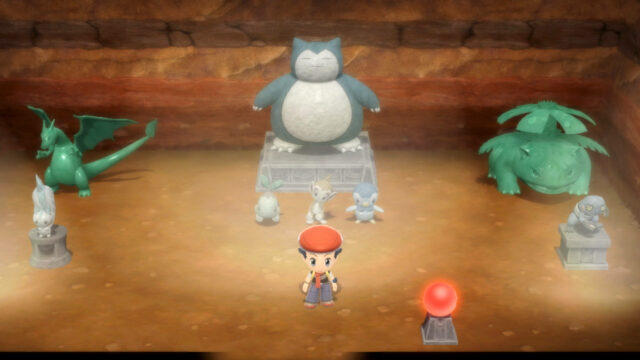 One area where Shining Pearl succeeds is in its graphics and presentation. The game is beautiful, colourful, and the 3D environments are incredibly inviting to players. The Pokémon are cute, vibrant looking, and well animated. It’s adorable to see their interactions with the player, especially if they are pleased or excited in battle. The exaggerated character models add a nice playful element in the graphics as well, just adding to the layer of adorableness. The soundtrack in Shining Pearl is good as well, though it’s the typical Pokémon fanfare that we’ve all come to love and expect. There are also tons of sound effects coming from the Pokémon themselves, and it’s inoffensive.

ICLA had an opportunity to transform Pokémon Shining Pearl into a much more memorable experience. Having played the original, it’s disappointing to see that the Shining Pearl is the same game I played back in 2006, with nothing more than a pretty coat of paint. None of the balancing issues are fixed, the backtracking is still as much of a slog as ever, and the roster of Pokémon is far from impressive. As much as I love Bidoof, even my favourite loaf of beaver bread couldn’t save the experience for me, and my hope is with the next remake is that it receives meaningful adjustments, instead of rehashing a mediocre Pokémon game that isn’t memorable in the slightest.