With a new generation of Nintendo hardware, a Pokémon game was bound to follow.  The series that began on the original Game Boy has seen spinoffs on consoles before, but never before a mainline game.  Now that streak has been pleasantly broken with the recent releases of Pokémon Shield and its counterpart Pokémon Sword.  While there’s a huge step forward in regards to player freedom and additional activities for the player to indulge in, it still feels like the more things change, the more they stay the same in places where the formula needs to be shaken up.

Combat hasn’t changed much since the series’ inception, though Shield does bring a couple new twists to the table.  In most battles both sides will send out a single Pokémon, which has up to four combat moves.  Each also has one or two elemental types associated with it, which dictate the little critter’s strengths, weaknesses, and sometimes available moves; by and large these elemental match-ups make some sense, such as water trumping fire, or fire scorching grass, while others such as faerie being weak to poison can leave the player scratching their head.  There are seventeen different types, and it can be a bit much to remember which match-ups are favourable. Thankfully the game keeps track of weaknesses and will inform players of the efficacy of the move when selecting an attack.  After choosing a Pokémon, each turn has players and opponents choosing to use a move, which could be a direct attack, provide healing, apply a buff or debuff, or some combination of the three.  Players can also use items, switch their active Pokémon, or in some cases retreat from battle.  Knocking out all of the opponent’s Pokémon will net the player a win and some Pokébucks. 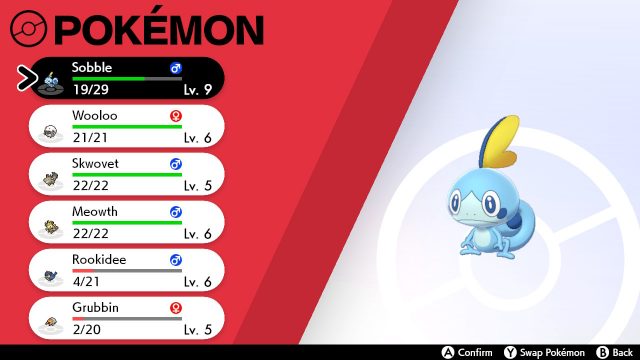 A mix of new and classic Pokémon await, even at the start of the game.

To build their team, players will also need to seek out wild Pokémon, which have no trainer, and capture them using Pokéballs.  Wild Pokémon are split between visible models, which players can elect to make contact with to start a fight, or shaking grass, which doesn’t show which Pokémon will be attacking prior to the player leaping into battle with them.  Though there’s nearly one thousand Pokémon to date, Shield offers about 370 Pokémon to capture; by trading with the game’s counterpart, Sword, players can collect all 400 listed in the player’s encyclopedia, commonly known as the Pokédex.  About 100 of these are brand new to the Galar region, which strongly resembles the real world United Kingdom.  The Galar region also boasts a unique environmental property that allows Pokémon to take on new forms called Dynamax.  Every Pokémon can take on this massive form, which transforms their moves to special Dynamax abilities based on the move element and type.

While all of this will sound almost painfully familiar to anyone who’s played a past Pokémon title, that isn’t to say Shield doesn’t offer anything new.  As the number of Pokémon grew so has the number of moves that can be learned, so the developer Game Freak has condensed them down, with many similar attacks being eliminated or merged to create new moves. Gyms, where the play collects eight badges needed to complete the game’s main plot, see new life with Gym Challenges.  These themed challenges add interesting puzzle mechanics to each gym, which previously were generally just a few battles easily dodged on the way to the Gym’s themed leader.  Now players complete a variety of tasks like using dowsing rods, avoiding unstable footing, or switching streams of water off and on.  These provide a nice break from combat before the player takes on a Gym leader, each with their own element to tackle including two (Ghost and Ice) unique to Shield.  Acquiring a badge at each Gym not only raises the level at which Pokémon will obey the player character, but also dictates the maximum level of wild Pokémon can be caught.

In Galar, a single Champion reigns. Any challengers who round up all eight badges must then compete in a tournament to progress into the coveted championship match.  There are also three rivals that Shield will regularly throw at the main character: Hop, the little brother of the current Champion, whose good cheer and enthusiasm seems almost boundless; Bede, the snobby youth endorsed by the chairman of the region’s Pokémon league; and lastly Marnie, whose fan club Team Yell will hilariously attempt to stymie the player with very little success.  Each rival has their own personality and motivations, though sometimes it feels like all of them get in the way of the story. 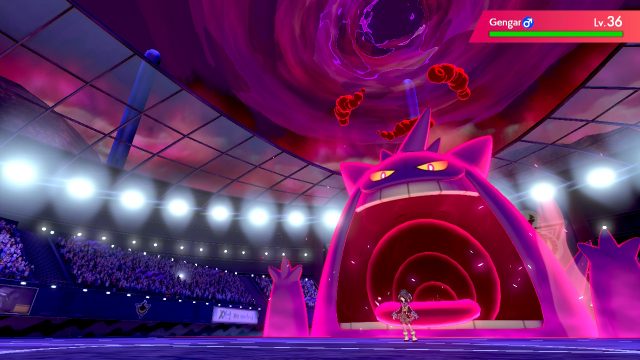 For those who want to do more than collect badges or catch ’em all, there’s ample content to consume. Central of these options is the new Wild Area.  The Wild is a sprawling open zone with many different sections within it, each with its own weather and Pokémon that appear within it.  In the Wild, untamed Pokémon wander visibly, shake the grass, and even leave their grassy safe havens.  Those Pokémon found outside the grass will generally be larger in size and higher level.  Fatigued trainers can set up camp, kick back, and relax.  The camp feature combines several functions available in previous games, such as being able to interact with captured Pokémon to increase their friendship rating, and adds a new one: cooking curry.  By combining together cooking ingredients, players and their Pokémon can create dishes ranging from revolting to stunning.  There are so many combinations of ingredients that there’s even a special curry dex to collect all 151 recipes.

Glowing fissures in the Wild Area also lead to one of the game’s key features: Max Raid battles.  These battles are four trainers versus a single Dynamax Pokémon. Since some Pokémon are exclusively available via Max Raids, players will want to keep their eyes peeled for these fights. These special encounters can be taken on solo, with NPC trainers filling in the three spots, or by opening them up to online players seeking to join in on the Max Raid craze sweeping the Galar region. Rewards for successfully completing these battles include Experience Candies which can be used to level up Pokémon, Dynamax Candies which increase the power of Pokémon’s Dynamax forms, berries used for cooking, items used in certain Pokémon evolution, items sold for lots of money, and more.

A mix of fresh and returning features are all available under the newly minted Y-Comms.  Players can use link trades to swap with friends or test their luck with surprise trades. This replaces the previously-named wonder trade and runs in the background while regular game progression continues. Those looking to lock horns can do one-on-one battles with trainers locally or around the world.  Alternatively, those who prefer to jump into Max Raid battles can find them listed here as well, with the caveat being that trading and battling online do require a subscription to the Switch Online service. 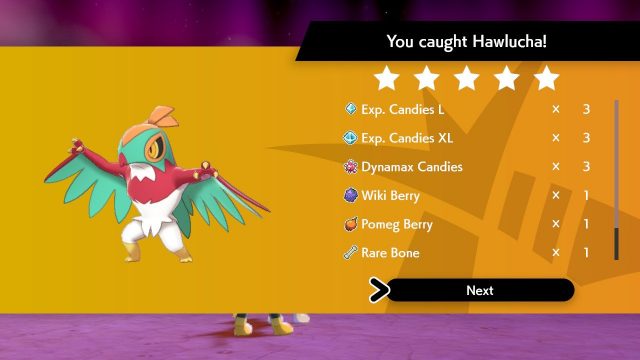 Max Raid battles award Candies, Berries, and many other items.

That isn’t to say all the new content is perfect.  While the Wild Area is a great idea, exploring it online frequently leads to slow-loading areas, laggy progression, and even game crashes.  Similarly, while surprise trades are a great way to discover new Pokémon, linked trades have severe limitations and even setting a code on trade rooms doesn’t prevent confusion, and trading with the wrong partner is far too easy to do.  Max Raid battles are exciting, but getting into one can be frustrating, as the game will frequently suggest raids that have closed entry or accrued four entrants already.  It’s disappointing to see so much potential bogged down by a bevy of issues when there are other shining quality-of-life improvements like an immediately available fast travel option that replaces the old HM Fly.

The game’s story starts out fairly pedestrian, with the player choosing one of the three standard fire, water, and grass starters before taking off on the classic journey of eight gyms.  Post-game unlocks additional story, legendary Pokémon, a battle tower and more.  How long it will take players to complete the main story will depend entirely upon how much focus is given to the main story — the critical path takes about twenty hours while those who opt to explore more leisurely can easily clock in up to forty before the credits roll.  Overall, the game is quite easy, with the exception of the Championship fight which provides a good challenge and will require a well thought-out team with checks and balances.

The game does a great job feeling like an adventure set in the Great Britain countryside, with amusingly realistic instances like Wooloo blocking a train line and new tea and coal-inspired Pokémon.  Between newly discovered Pokémon as well as returning ones with Galar-specific forms, Pokémon has never felt as bright or vivid a world.  Dynamax Pokémon each have a unique flair, including crazy new forms such as Gengar becoming a terrifying maw of doom or Alcremie transforming into a gigantic, jaw-dropping cake. Overall the game’s graphics do a solid job bring these all to life. Clothing shops as well as barbers are back, and customizing a character with plenty of outfit variety (including trousers for the ladies) is available for those who enjoy fashion; it would, however, be nice if the more unique pieces were far more affordable. 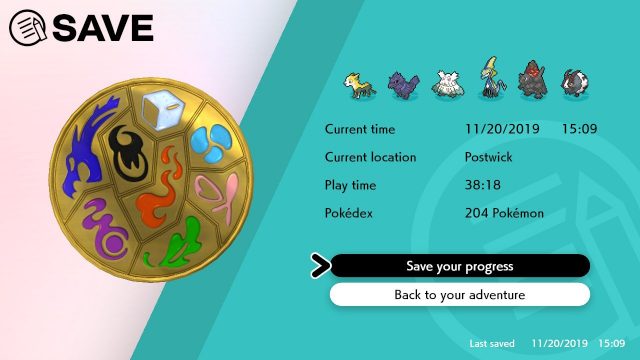 Having a well-rounded team is important to acquiring all eight Gym badges and completing the main story.

Shield‘s music is as solid as the graphics, and feels like a nice refresher for the series without losing the core familiarity of Pokémon music and sound effects. Restoring a team at the Pokémon Center still has the same jingle, but remixed to be different enough to be interesting; menu sounds, saving, and the swooshing of Pokéballs will also sound comfortingly familiar to series veterans.  Most unique areas, including Gyms, have their own music, all of which are fun and appropriately themed.  It may not be music to listen to when not catching Pokémon, but while playing the game it sounds great.

Ultimately, while Pokémon Shield could be considered the best Pokémon game in the series, its repeated flubs keep it from being truly excellent.  Shield gives the series a much needed rest by limiting Pokémon availability and move set overlap as well as adding some welcome variety to the game’s progression.  It’s truly a joy to play, with ample side activities to break up the otherwise familiar gameplay loop.  That being said, Shield is still a Pokémon game; anyone not already a fan or tired of the series won’t find a compelling reason to return here.